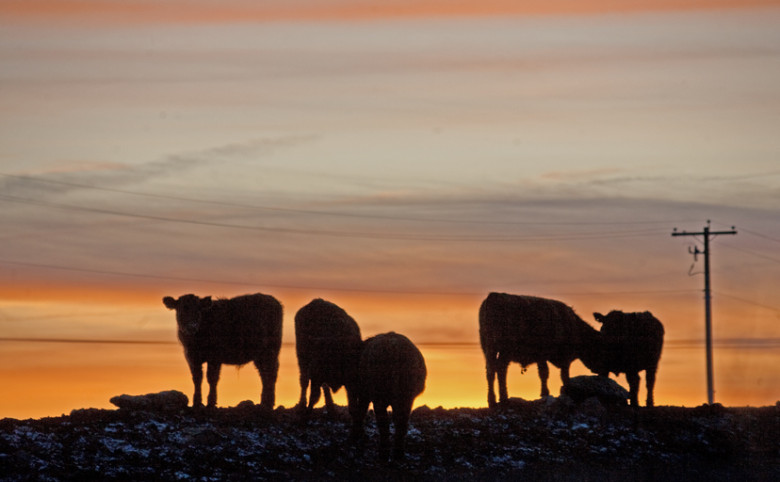 It seemed as if the storms lined up, one after another, to pound the land that year. The river had been running high all winter. Finally, the rain quit and the water level dropped.

Wade decided it was time to try crossing the river at the ford to save himself 10 extra miles of tractor driving while feeding cattle.

His experiment went fine until his front tires dropped into an unexpected hole, newly washed out by flooding. The front end loader dipped sideways into the swift current along with a nearly 1-ton hay bale.The mounting water pressure flipped the tractor.

Wade was trapped in 10 feet of freezing water when the current crumpled his back window, flooding the damaged cab. Holding his breath and kicking off his rubber boots, he pushed upward to open the right hand door—nothing moved.

Searching for oxygen, he backed away from his upside door and, gratefully, located an air pocket crammed in a corner by the windshield. After inhaling a deep breath, he dropped back to the bottom of the cab, then pushed off with both legs, slamming his shoulder into the right cab door—three, four, five times—nothing budged.

Lungs cramping, Wade returned to his air bubble. Lips and nose squashed against the glass, like a kid making “kissy” faces in a schoolbus window, he sucked at the air left in the pocket.

Returning to the bottom, once again, he bashed the upside door—still stuck.

Options reduced, heart thundering and adrenaline pumping, desperation fed strength to his muscles. Gathering both legs beneath him, he slammed his shoulders into the topside door. It budged, just barely.

With his lungs convulsing, he pried open the door with his fingers and stood up. His head popped above the river surface. Clambering out of the cab he perched like a shivering and drenched stockdog on a single tractor tire. He was content to simply breathe and be alive.

Slowly, as his physical functions recovered and his world returned into focus, he looked around.

A hundred and sixty hungry cows lined the bank of the river, oblivious to the struggle in the tractor cab. The last thing they’d seen was their dinner disappearing beneath the water’s surface. Like pouting teenagers, they bellowed, begged and sniveled as Wade balanced on the tractor tire.

“Not today, girls,” he muttered, teeth chattering in the freezing wind.

Wade swam to the shore and the cattle, still demanding hay, enclosed him in a tight circle. An experienced cow-cusser, he pushed through the crowd. Slowly, petulantly, they stepped aside.

Wade set out for the warmth of home, stumbling barefoot through the boulders along the riverbank. The cattle lined out single file behind him, pleading for their dinner and looking much like a modern version of the Pied Piper leading the rats out of Hamlin.

A mile later, he slammed the yard gate on the bovine sob-fest, and hurried to the bathroom for an extra long, hot shower.

The following morning, he double-fed his cattle, noticing they paced back and forth between the piles of hay and the site of his up-ended tractor. He realized it might take a while before winning their trust again in matters of hay.

But, that’s OK—warm and dry—he’s much more tolerant of their behavior.

Bing Bingham is a writer, rancher and storyteller. If you are interested in more stories of the rural, American West, check… http://bingbingham.com/blog/

How Rusty Eagle Stopped Being a Bully…