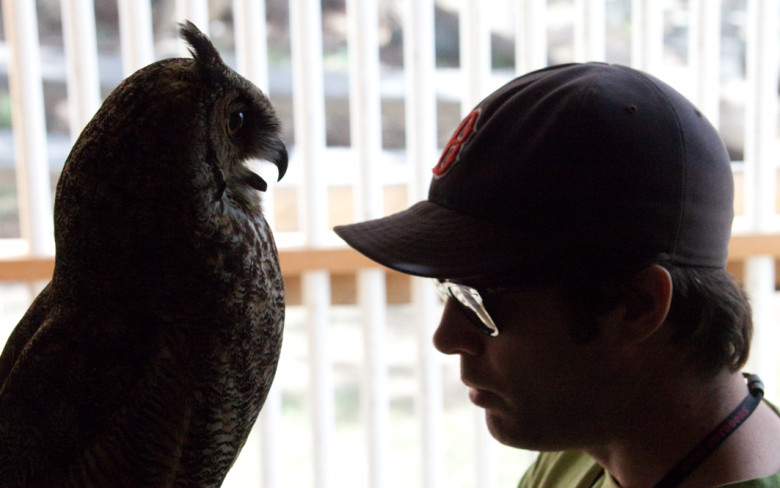 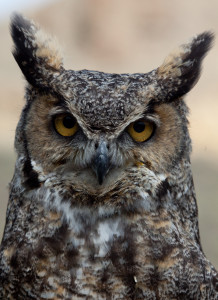 A Great Horned Owl is one of the most ferocious and successful predators in the desert sky; photo by Bing Bingham

On a beautiful day, Mariah, the Great Horned Owl, was having a tough time.

A soft spring breeze drifted up the canyon, sparking a gentle dance in freshly bloomed wildflowers and willows. Northbound migrating birds sang for nesting rights and territory. The land was relaxing in the warmth of the sun and held the promise of good things to come.

One by one, Kelly checked his farm fields, finalizing his plans for the summer growing season. Traveling near the river’s high-water mark, he stopped after noticing a live animal flapping and flopping where he usually plants potatoes.

Moving closer, he spotted an injured owl trying, and failing, to return to the air. It was impossible to tell how the injury happened. Perhaps a collision with a powerline resulting from a misjudged stoop or, possibly, a lucky swipe from her intended prey. Still, one wing was folded in an impossible direction as she flailed on the ground.

A Great Horned Owl is one of the most ferocious and successful predators in the desert sky. These silent fliers won’t hesitate to take an unwary skunk, barn cat or small dog. The only bird not intimidated by their powerful beak and claws is a Golden Eagle.

Kelly was mindful of this as he approached the distressed bird. He slipped off his canvas chore coat—waited for an opening—then pounced on the animal making sure all her weapons were safely tucked inside the coat.

Carrying her across the field under one arm, the only sounds he could hear were the “CLACK…CLACK…CLACK” of the angry owl’s beak longing to remove a chunk of her tormenter. 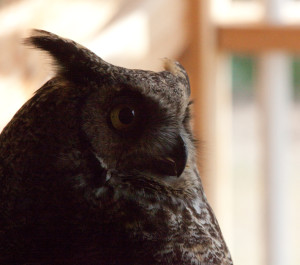 Placing the owl gently on the seat of his pickup, he doubled-checked the tied sleeves of his coat. The thought of being in an enclosed cab with a large angry and injured owl held little appeal. He drove across the river and up the road to a local summer camp for middle-schoolers.

“With the bone sticking out that way,” said Joe, the camp manager, “that wing is no good anymore.”

Kelly’s farm was in a remote part of the state. The closest veterinarian was a hundred miles away. While he was skilled with farm animals, he was less comfortable with wild animals. The nearest wildlife sanctuary for rehabilitating birds was better than 250 miles away. Kelly, Joe and the injured owl were on their own that lovely spring day.

“What do you suggest? Kelly asked.

“That we do the best we can with what we have,” said Joe, “it’s probably a recent injury and this bird has plenty of life left in her.”

“We can travel for help and she’ll stay stressed until she dies of infection or we can use her energy and will-to-live for healing…hold that wing out for me, please.”

Joe walked over to the tool shed and pulled a pair of limb loppers off the shelf. He returned to Kelly and, with one swift motion, removed the bird’s wing—forever changing her life.

“She’ll never survive in the wild,” Joe said, “but now, if she lives, maybe she’ll work out in our raptor demonstration program for the kids at camp.”

With much TLC, the owl lived. Her name became Mariah and she developed a fondness for frozen laboratory mice. After all, the bite-sized morsels were delivered to her cage daily much less work than gathering food in the wild.

Great Horned Owls, typically, live 15 to18 years in the wild. Mariah was an adult when she was injured, but her exact age was a mystery.

She quickly developed a reputation for being easy to handle in front of audiences. Her handlers figure she entrances about 3,500 middle-schoolers every year with her large yellow eyes and head that swivels nearly 360 degrees. Over the past two decades, she’s been the star of the summer camp raptor show and a learning tool for more than 70,000 youngsters.

This month, during spring break, she’s beginning her 21st summer—not bad for an owl that didn’t have many options.

Bing Bingham is a writer, rancher and storyteller. Since he heard this story, he’s never looked at limb loppers quite the same. If you’d like to read more of his stories about the rural American West, check… http://bingbingham.com/blog/


Passing Up the Money Shot…