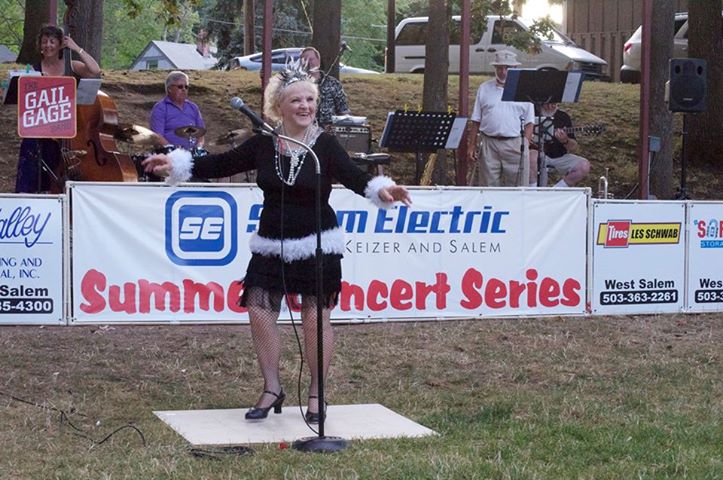 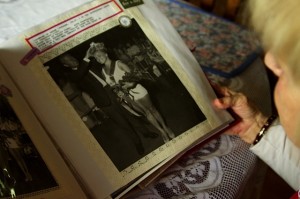 Looking through the scrapbooks of her youth shows her looking like a cross between Lana Turner and Doris Day; photo by Jan Jackson

SALEM, Ore – When Eileen Booth won a big talent contest last year, she was so excited she blurted out something she meant to keep a secret – her age. Still dancing at nearly 87, when she turns 90, she hopes to appear as the oldest active fast tap-dancer in the book of Guinness World Records.

Booth, who has been performing since the age of three, regularly entertains in Salem at retirement homes, care centers, fairs and various social events. Calling herself the Flapper Tapper, she appeared in the Chemeketa Community College production of Hello Dolly and also performed with the Follies at the local Elsinore Theater. She carries her dance board in the back of her car so she never has to turn down a chance to dance.

A native of Nova Scotia, Booth with three older brothers, she started tap dancing at the age of two because her doctor prescribed it. She does it today because she loves it.

“I was born with rickets, a common childhood disease in my day caused by a vitamin D and sometimes lack of adequate calcium in the diet,” Booth said. “When I turned two, the doctor told my mother to have me do something that exercised my legs. She came up with dance lessons. Mother was a single parent and we couldn’t afford much, but she found someone who would give me ballet lessons for $7 a month and signed me up. She and the teacher very quickly saw that I was too frisky to be good at ballet, so they switched me to tap dance lessons, which turned out to be a perfect match. 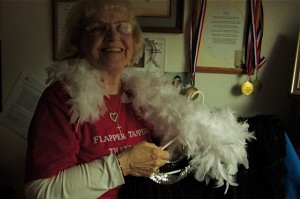 Amid costumes and awards in what she calls her ego room, Eileen Booth shows off her collection of Flapper Tapper memorabilia; photo by Jan Jackson

“Though I was still young when Mother and I moved to Montreal, I was in my teens when I started dancing at the Le Tick Tock, the Esquire, the Samovar and other Vegas-style cabarets. I danced while the cabaret dancers changed their clothes. By the time I finished high school, it seemed like all I was doing was a dancing, sleeping, showering, dancing, sleeping, and showering when what I really wanted to do by then was date, go to business college, marry and have children. Much to my stage mother’s chagrin, at 18, I quit dancing.”

While she put her tap shoes away, Booth (who looked like a cross between Lana Turner and Doris Day) continued to enter and win beauty contests, sing in musicals, fundraisers and church. She also completed Business College, married and became a very successful businesswoman. She has one son, four grandchildren and six great grandchildren.

Today, Booth is either, oil painting, knitting hats for the homeless, playing in a ukulele band or sitting at the computer writing her life story.  To work out, she dons her high heels and dances to the music on radio.

“I hate any exercise I have to push something to do, but I still have to keep in shape,” Booth said. “KBZY plays the music I like and when I hear a good one I drop what I’m doing and dance around the house.”

You see her performance on Youtube by visiting http://www.youtube.com/watch?v=6Qwhivp5QCU .