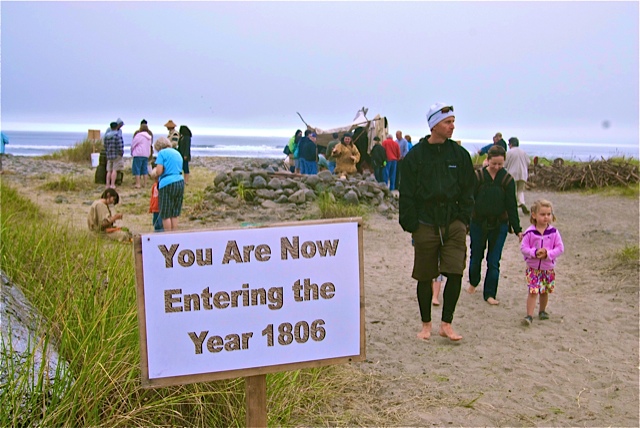 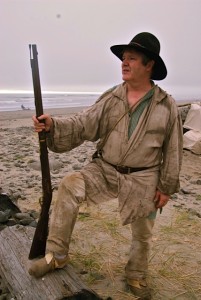 Private Gibson, aka Mark Johnson of Portland, stands guard at the Lewis & Clark salt makers camp on the beach in Seaside, Oregon; photo by Jan Jackson

“I was born in Chicago, but I have lived in Oregon since I was three years old,” Johnson said. “My folks had an intense love for history and as a kid, I remember riding with them through back roads reading historical markers and looking for interesting places of historical significance. I also grew up helping them volunteer at the Oregon Shakespearean Festival in Ashland, and between history and the theater, I now have a love for both. In fact, I’m one of the very few engineers at Intel that shows up for work in costume on Halloween.”

Johnson, who claims that successful interpretative work requires research, research and more research, has read everything about Lewis and Clark he can get his hands on. A self taught musician, he learned to play the mandolin and he and his fiddle – playing son Tanner made a CD of Lewis and Clark Expedition songs. His garage contains a wardrobe cabinet of vintage clothing – a hat he bought at a garage sale for a dollar, a deer tail he found on Lemhi Pass and a pair of moccasins he made himself out of deer and buffalo skin. 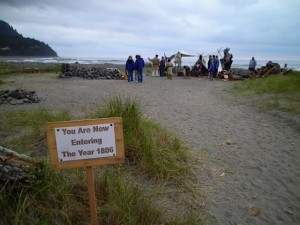 “I read and reread Louis and Clark’s journals to learn about the expedition details and though my wife won’t kiss me until I grow it back, I even shave my beard twice a year because it was military protocol of that time,” Johnson said. “I also try to experience some of the rough things they did – like taking my two-week vacation to paddle a handmade dugout canoe 100-miles down the Columbia River. In 2005, we went from Maryhill Washington to Astoria Oregon, stopping to do interpretations at the places Lewis and Clark stopped. Though I didn’t make my own canoe I did make my paddle. The experience was like riding on a log – with every wave breaking over the top. It certainly gave me a good idea what the members of the Corps went through.”

A unique way to experience the past, Johnson and the other members of the first-person living history
“About three weeks before a reenactment, the seven of us start an email conversation with each other to start talking about what we were going through during the expedition,” Johnson said. “We try to suspend reality and use our imagination to move into a different time and culture. We try to help our visitors enter the year 1806, where there are no hotels, modern houses or automobiles.

“It gets hard sometimes to balance the present when your day job deals with the future and your hobby deals with the past. However, it makes it all worthwhile when I look into the kids faces and see them become enthused about history.”