The Matriarch of 51st Street 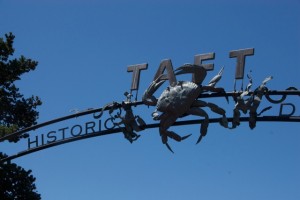 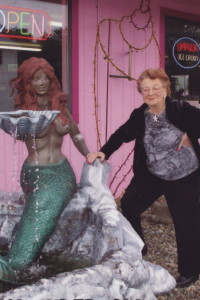 Eleanor Kramer – The Matriarch of 51st Street, stands by her signature red-headed mermaid in front of Eleanor’s Undertow and Take Out Restaurant; photo by Vickie Kramer Brosy.

LINCOLN CITY, Ore. – Eleanor Kramer, can look down 51st Street and see the house where her great grandmother lived. She’s also not far from the one-room Slab Creek grade school where as the only girl among nine boys, she went to school. And she still lives on the Salmon River where her grandparents homesteaded in 1908.

Eleanor has had a vested interest in 51st Street. She worked as an assistant manager for Mo’s for five years and with Mo Niemi’s blessing, she opened Eleanor’s Undertow and Take Out Restaurant at the west end of 51st Street.

The area now known as 51st Street used to be called Taft. A recent urban renewal project inspired a return to its original charm and the merchants and the city responded with enthusiasm. 51st Street, positioned on the north side of Siletz Bay and the ocean, has become a magnet for those seeking nourishment and respite.

The artisan can blow a glass float at the Jennifer Sear’s Glass Foundry, create a fusion art masterpiece at nearby Mor-Art or buy from a variety of artists whose finished works fill nearby galleries.

Float fairies hide 60 numbered and signed hand-blown floats each weekend between Labor Day and Memorial Day for the beach comber to discover. On special weekends you might even find some glass sand dollars and Japanese floats tucked here and there between the high tide line and the bluffs. It’s a one stop, everything-in-one-place place for singles, families and groups.

Taft’s famous red head
Eleanor, who can talk from experience about being one of the famous red head beauty contestants in the 1940s, the upcoming sand castle contest in August, catching crabs and bird-watching in Siletz Bay or beach combing, also chats easily about 51st Street’s future. The idea for the beautiful flower baskets hanging from the gas-style lamp posts was hers. If you haven’t taken a summer stroll down 51st Street to see them, you must do so.

Ed Johann – Legend In His Own Time


Ed Johann – a Legend in His Own Time…