Ed Johann – Legend In His Own Time 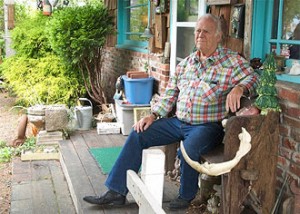 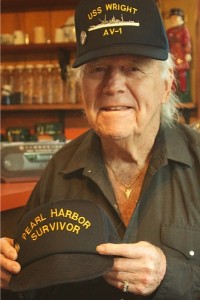 LINCOLN CITY, Ore. – It was more than 50 years ago that Ed and Marion Johann sat at their kitchen table in Portland and worked over their expenses to see how they could afford the empty lot they wanted to buy in Lincoln City. Money was tight in the early 1950s. The Johanns were raising three boys, already buying a house and a car and though a lot at the coast for only one-hundred dollars seems like nothing today, it was a lot of money then. They found the $10 they needed for the deposit and they came up with the $10 monthly payments. Today, Ed Johann is still living in the cottage he built on that lot and the folks in Lincoln City are the better for it.

The early days
“Marion used to come stay with her grandmother and fish out of the windows of the covered bridge that sat over Schooner Creek,” Johann said of his wife’s long time attraction for Lincoln City. “We used to bring the kids and camp on the east side of the highway when, if you found a spot you liked, all you had to save it was set your lantern or Coleman stove on the picnic table. Once we bought our lot, I moved in five truck loads of gravel, set about gathering used building materials and built the small cottage I still live in today. Where we were, just south of Taft, the roads were dirt and gravel and there were not many houses. It was called Cutler City, but today I consider it one of the ‘string of pearls’ that make up 20-Mirical-Miles of Lincoln City.”

Johann, the middle of three brothers, was born in the San Fernando Valley on July 11, 1923. Expecting to find glamour as the boy sailors he saw in the movies, he was 17 when he joined the U.S. Navy in 1941. He has military medals to show that he personally saved more lives than could be counted on the morning of December 7, 1941, when he was unlucky enough to be shipboard in Honolulu, but lucky enough to survive the Japanese attack on Pearl Harbor. He continued saving peoples lives for the next 30 years as a career Portland fireman and a mountain climber who volunteered for mountain rescue.

A life devoted to service
“After I got out of the service, I spent a brief time in northern California and then moved on to Portland and joined the fire department,” Johann said. “In my spare time, I led groups of people mountain climbing all over the world and also volunteered my time rescuing climbers in trouble. I stopped the mountain climbing not too long after my late wife and I retired to Lincoln City because it was too hard to make the trip to the mountain from here only to find the weather prevented a climb.”

Though his retired life didn’t require the same degree of bravery, his desire, determination and dedication to help people has made Lincoln City a better place to be. He started the Lincoln City History Museum, he served on the city council for 15 years, his columns have appeared in print, his community interviews have played over the airways and he’s done his share of clearing nature trails in and around the city.

The Lincoln City legend today
“I guess as the middle child between brothers, I always had to be on duty,” said the 86 year old Johann who doesn’t take himself too seriously. “I don’t drive any more but I still have the desire to be involved and to help people. I like being here in the rain and the sand buffered by the Salishan spit. Though the spit won’t save me from any impending tsunami and since I’ve already survived more than my share of peril, I’m not about to worry about that. My cottage isn’t computerized either, which is just as well because the last carrier pigeons I sent out haven’t come back either.”


The Matriarch of 51st Street