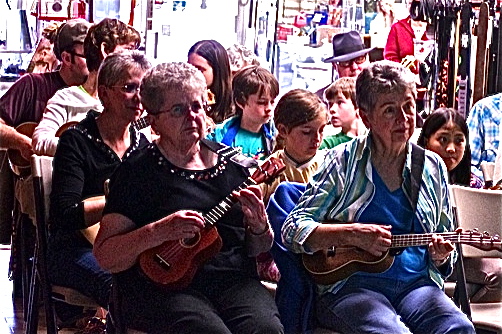 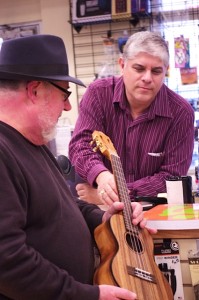 …Had the pioneers known about the ukulele, they would have brought it along with them on the Oregon Trail. Because it is small and easy to play, it is a perfect instrument to play around any campfire. Now however, after more than 100 years on the market (and more than 150 years since the Oregon Trail), the ukulele in Salem Oregon is going viral. The number of new players is going up, supply of quality instruments is having trouble keeping up with demand and enthusiasts of all ages are flocking to free ukulele circles for instruction. No longer just brightly painted plastic toys for kids, today ukuleles are found in music stores everywhere selling for $50 to $3000 (and way up). Just last month, West Salem guitar-playing retiree George Head, ventured out and attended his first ukulele circle at ABC Music in downtown Salem.

“Since 1995, when I retired in 1995 as a computer analyst for Oregon’s Children’s Services Division, my wife Cathie and I have traveled a lot,” George said. “And, even though I didn’t know how to play them, every time we went to Hawaii I would go into one music store after another and look longingly at the beautifully crafted ukuleles. Of course the ones that appealed to me were in the $1000 to $2500 price range and I thought that was too expensive for me to buy just to hang on the wall like a piece of art. Cathie took care of that, she got me one for Christmas.”

George, who was born in Oklahoma, soon moved to Roseburg, Oregon. When his mother realized his love of music kept him sitting entranced watching and listening to his uncle’s band perform, she bought a piano and signed him up for lessons.

“Mother was really strict about making me practice every day and of course I didn’t like that,” George said.  “She finally let me quit but when I wanted a guitar, she said, ‘Not so fast – you had your chance with the piano.’ I was 13 at the time and I decided if she wouldn’t buy me one I would make my own. I was 18 by the time I finished the first one but the next two only took a couple of months each. The first one I used myrtle wood, the second one was mahogany and the last one walnut. The ukulele Cathie bought me is made out of monkey pod and it’s a beauty. 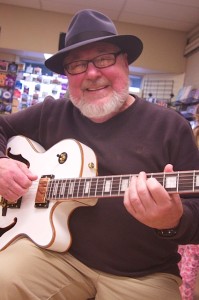 The ukulele is a sweet little cross between a guitar and a banjo and it has been around since the late 1880s when the Portuguese came to Hawaii to work in the sugar cane fields. Originally called a machete and sometimes a taro fiddle, we now know it as the Hawaiian ukulele or a uke for short. Although plastic versions abound in children’s toy stores and souvenir shops, the ukulele is back in music stores as a quality instrument and groups like ABC Music’s free Ukulele Circles are cropping up all over. David Chassman, who owns ABC Music, is third generation to operate on the site his family used to call Square Deal Hardware & Music Store.

“It’s been fun to see the ukulele come back,” Chassman said. “The age range of people go from kids on up and are attended by whole families. Some have their own instrument and some play the ones we have in the store so they can see if they like it. We’ve been doing this for a couple of years now and it draws all ages and all stages of musicians. Dan Miles starts the night teaching finger positions and in a short time they are all playing as a group. From 6 to 7 pm on the first Wednesday of the month, this place is a fun place to be.

Maximillion and His Bully Frog Gang…


Hiding Away at Happy Camp…