Why Sheep – The Lady is a Shepherdess 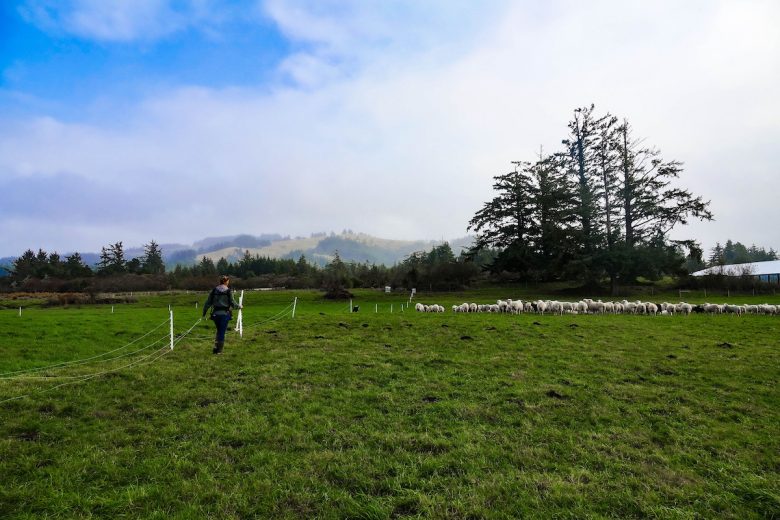 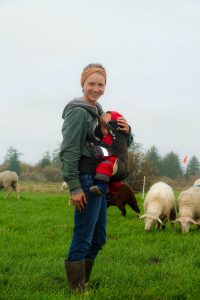 The lady is a shepherdess – Cora Wahl and baby son Ellis.

Langlois, Ore. – Cora Wahl knew the answer her mother needed to hear when she asked Cora what she planned on doing when she grew up. “I think I want to be a marine biologist,” Cora said. But even as she said it, the fifth-generation daughter of a sheep grower knew she too was going to raise sheep.

Today, the pretty young woman, wife, and mother, is indeed a shepherdess. Holding university degrees in agriculture and business management, she, and her husband Woody Babcock, are transitioning from owning and managing a 250-head sheep dairy to developing a flock of grass-fed meat sheep.

Cora was born in Coos Bay but after her parents divorced, she spent her grade school years in North Bend with her mother and her high school years living with her father on his sheep ranch in Langlois, a small town on Oregon’s southern coast. In the beginning, she mainly liked the ranch life and the working hard outside. But by the time she came home from Oregon State, she was caught up in every aspect of the sheep industry. 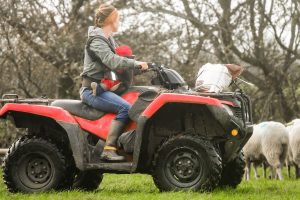 “Before I left for college, I wasn’t really in love with the individual animals that much,” Cora said.  “You know how some people are just great with animals that way? That wasn’t the thing that caught me. It was more of the overall full process of herding and lambing. However, by the time I came home I thought sheep were pretty cool. Today, I love it all.

“It’s easy to think about the wool and meat side of sheep, but there is the pasture management side and I love that too. You can do some cool stuff with pasture management which is something that is often overlooked. You can make sheep use the land in ways that can be very beneficial to both.

About the sheep dairy, after Cora did an internship on dairy in college, she told herself she was never going to run a dairy! 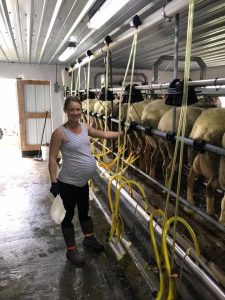 Cora working in the sheep dairy.

“But dairy sheep was a niche market that Woody really wanted to get into and so I jumped on board with him,” Cora said. “We didn’t have the money to go out and lease acreage and buy animals, so we started out with just a few animals. As good as the demand for the product was however, with the high price of feed and transportation costs from our remote area, we decided not to continue. As we transition now to meat animals, we’ll start small again. Woody and I make a good team and we have a supportive family and friends in the sheep industry who help us a lot.”

The history of sheep

The history of sheep goes back so far, it’s difficult to track. One of the earlies animals to be domesticated for agricultural purposes, sheep were originally kept solely for meat, milk, and skins. Sites in Iran suggests that selection for wooly sheep may have begun around 6,000 BC and earliest woven wool garments have been dated to two to three thousand years later.

European colonists started bringing them to the New World in 1493. Cora can trace her own family’s involvement back to Scotland five generations ago. With their wool, milk and meat all packaged in one little body with little, tiny, inoffensive feet, Cora says sheep can keep the country going.

“I’m always hearing how sheep are bad for the environment,  but that isn’t necessarily true. Good pasture management means working with the soil. Giving the plants a break by rotating them, gives the roots a chance to dig down and go deeper and which gives more water access and more biodiversity below ground.

“I don’t think people are aware of the huge benefit that as you have more going on with the fungi and bacteria they’re pulling in more carbon. They are not the big carbon polluters they are made out to be.

While developing their market lambs and selling meat business, Cora and Woody continue to look for available pastureland on which to run their animals.

“In this revamp to Wild Rivers Lamb, I spend a couple of hours a day connecting to a growing list of customers and selling and packaging our market lambs,” Cora said. “I get it U.S.D. processed, I sell it by the cut and mainly source from my family so it’s all local to our area. 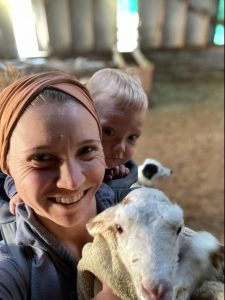 Cora and baby Ellis on duty.

“To be in this business, you have to be flexible – be able to go with the flow. Even when you can make a schedule, you can guarantee that by 10 AM you are not going to be on par with it. I don’t know if I’ve ever gone through a day as I have had it planned, but raising sheep is still fantastic.

“We have to feed everyone, and I’m convinced that the real benefits of raising sheep that they keep the land working and feed people at the same time. I think we can do that without using electricity and power and whatever else it takes to artificially make food in a lab. We can make it happen.” 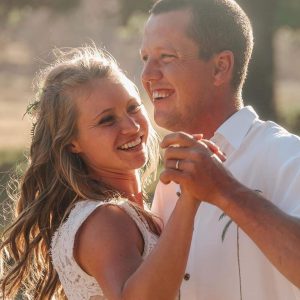 Cora  and Woody on their wedding day.

Cora has loved her shepherdess life as a student, and loves it now as a wife, mother and  responsible businesswoman.

“The sheep business is not a man-made or self-made business,” Cora says. It is a community-made business, and I’m grateful for it.”