A Hunter is Born 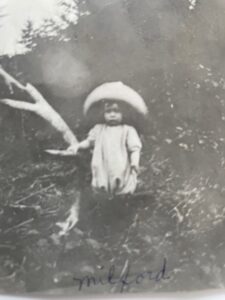 Once upon a time, a long time ago there was a small boy who must have been born at a real young age because he can’t remember anything before the age of two when his memory kicked into gear. It has been working good for almost 80 years.

I never learned how to lie so everything I write is true.

To start with at wasn’t my idea to become a writer at this late age but, move over Grandma Moses and make room for me.

Also, Jesus had nothing on me either, because he wasn’t the only one who slept in a manger. But that story will have to wait for the chapter on music.

At the age of five, I went on my first hunting and camping trip. My dad did the hunting and my mother, sister, and I did the camping. My sister was three years younger than me. We were too small to walk on a trip like that, so my father borrowed a gentle old horse from my uncle to carry us and the camp gear. They put the rolled-up quilts and blankets in a circle around us so we couldn’t fall off.

We went about 14 miles back in the wilderness to the head waters of the Clatskanie River. There were no roads more than one track wide for horses and wagons. Mostly giant wild-game trails. I had a lever action B. B. gun I wanted to take on the trip but the screw lost out where the front of the lever pivoted to cock it so I couldn’t take it. I hunted throughout the day for that screw but never did find it. That gun was just like the one they make now that’s called Red Ryder. 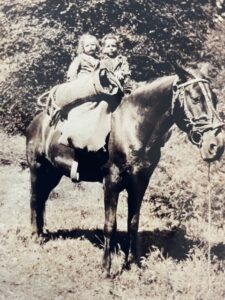 On the way back a bear had crossed the trail just before we got there. I have heard many years since that horses are afraid of bears and I will agree with that. I can still feel that old horse quiver. They took us off the horse to be on the safe side and led it on out the trail till it couldn’t smell the bear anymore. Dad scouted around for a while but didn’t find the bear. He didn’t get a deer that trip either. Speaking of funny names, the old horses name was Old Bird and the first cow my folks bought was name Pony.

When I was 6 years old a friend of my folks who lived at Aberdeen Washington gave me a single shot bolt action .22 rifle. I wasn’t big enough to hold it up, so dad let me take it out in the back yard and rest it over an apple box and shoot at a tin can on another box about 30 feet away. I could not keep my left eye shut so I held the rifle with my right hand (with the help of the apple box) and held my left hand over my eye. That way sometimes I could hit the can.

My dad let me get away with that two or three times and then said no more shooting until I could keep my left eye closed by its self.

I tell you I really went to work on that. It took quite a number of days before I could keep one eye closed and the other one open. My dad had only two guns. A .32 Winchester Special and a Winchester Pump 12 gage Shotgun with a 32-inch barrel.

When I was six, I was with my dad over on our hill side and he had his shot gun with him. I begged to shoot it, so he laid it across a 4-foot diameter log and told me to aim at that white spot on another big old snag about 40-yards away. I think that gun weighed nearly as much as I did. I could just barely reach the trigger, but I pulled it. I don’t suppose I need to tell you it was a long time before I wanted to tackle that gun again.

When I was 11, I wanted to hunt Columbian Ground Squirrel which we called grey diggers. They would concentrate around farmers grain fields and dig their dens under stumps at the edge of the field. I never knew what became of my little 22. I think probably it didn’t shoot straight and Dad got rid of it. He was awful particular about his guns.

Also, when I was 11 my mother sold 21 subscriptions to a magazine and for a prize chose a little Stevens Falling Block Action .22 rifle for my birthday. At that time this little rifle sold in Montgomery Ward catalog for $3.25. That’s a lot of money when you don’t have any. I never wasted any ammo. I had fur or feathers in my sights for every shot. That little .22 accounted for a lot of grey diggers and a few quail and grouse. Nothing was wasted, we ate them. A guy told me years later that our reputation was to shoot anything we saw and eat anything we shot.