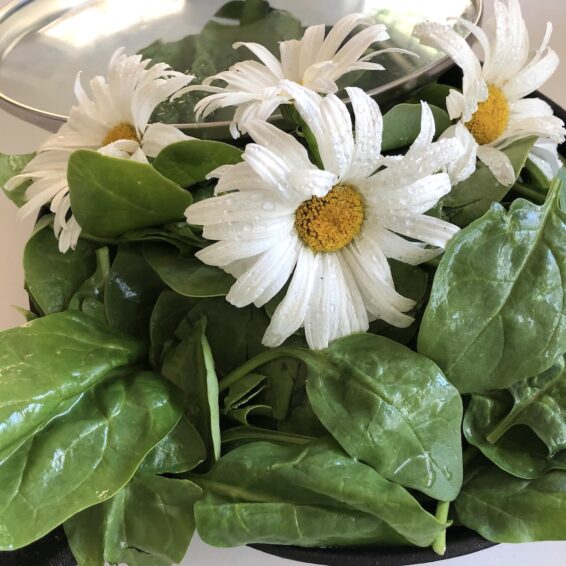 By Jan Jackson for One Pan Ann 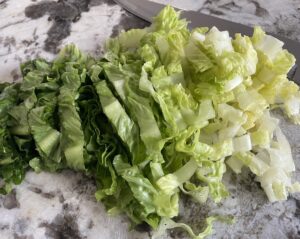 With the promise of anonymity, the fat lady agreed to sing. A source of experience, observation and wisdom, we’ll hear it as she writes it.

I love a good salad – once in awhile – but I also think salads are overrated. Everyone that goes on a diet, eats salads. Restaurants are filled with obese people eating salads. I think people want other people to see them eating salad.

So, that made me wonder what I would find if I Googled ‘Salads are overrated. I found a 2015 article Tamar Haspel wrote for the Washington Post. I’m going to add the hot link you can read the whole thing – but I’m also going to share the funniest things in it. Here goes:

How fun is all that? Ms. Haspel also mentioned that my favorite Oriental Chicken Salad at Applebees contains 1400 calories. Thats a two-day calorie allotment for me. Dang.   Why Salad is so Overrated. 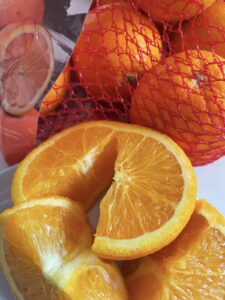 “Orange juice is the most popular fruit juice worldwide and has long been a breakfast staple,” says healthline.com. “Television commercials and marketing slogans portray this drink as unquestionably natural and healthy.”

Take a gander at this:

From the Orchard to Your Glass

Most store-bought types of orange juice aren’t made by simply squeezing fresh-picked oranges and pouring the juice into bottles or cartons.

Rather, they’re produced through a multi-step, rigorously controlled process, and the juice can be stored in large tanks for up to a year before packaging.

First, oranges are washed and squeezed by a machine. Pulp and oils are removed. The juice is heat-pasteurized to inactivate enzymes and kill microbes that could otherwise cause deterioration and spoilage (1Trusted Source, 2Trusted Source, 3Trusted Source).

Next, some of the oxygen is removed, which helps reduce oxidative damage to vitamin C during storage. Juice to be stored as frozen concentrate is evaporated to remove most of the water (4).

Unfortunately, these processes also remove compounds that provide aroma and flavor. Some of them are later added back to the juice from carefully blended flavor packs (5).

Finally, before packaging, juice from oranges harvested at different times may be mixed to help minimize variations in quality. Pulp, which undergoes further processing after extraction, is added back to some juices (1Trusted Source).

Supermarket orange juice isn’t the simple product it may appear to be. It undergoes complex, multi-step processing and can be stored in large tanks for up to a year before being packaged for sale in stores.

My advice? Just eat an orange. Hard to peel? Just cut it in fourths. Like tangerines better? Yes, I do – but – can’t get them year-round. Sometimes you just have to eat an orange. 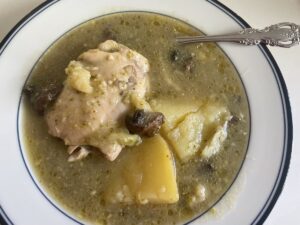 Yeah! Fall came yesterday and I was hungry for soup. Well, you might call it soup or you might call it stew. The point is, I took some of my favorite things, threw them in to my little rice cooker and in a very short time had a wonderful autumn meal.

I’m the good cook who doesn’t really care if she cooks or not but cares about eating healthy. So, this is what I threw into my little 6-cup rice cooker:

1 chicken thigh (you can use a chicken breast too but you won’t get the good flavor of chicken out of it).

3 mushrooms (because I love mushrooms and put them in/on/around everything). 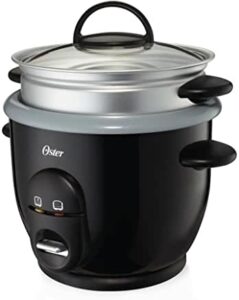 I added some seasoning salt, dried minced garlic to taste, and about two tablespoons of dry instant mashed potatoes (because I like the way it thickens the broth).

I plugged the rice cooker in, turned it on and in short order (didn’t time it but it was about 30 minutes or so, I was eating my first taste of fall.

Can’t say enough about the importance of cooking and eating plain uncommercial processed food. And, when you are cooking for one like I do, you can fix yourself any chemical and sugar free thing you want. 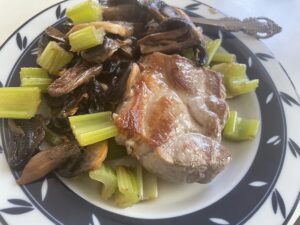 When one of your favorite poets is Ogden Nash, you know right away I’m not really into poetry. That said, one of my favorite Ogden Nash poems is:

So, when I found three pieces of celery in my fridge (they were headed downhill), I did what any red-blooded person would do. I cut them up and threw them in the pan with my meat du jour.

Now, my question is this (asking for a friend of course). What would Ogden Nash find to rhyme with celery fried. 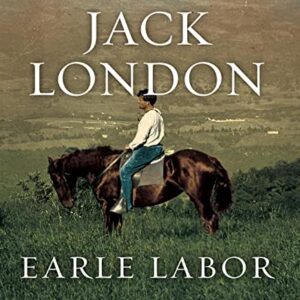 Just finishing up a fascinating biography on Jack London. I’ve been fascinated by the author Jack London since I visited Wolf Creek Inn & Tavern in beautiful Wolf Creek Oregon (an unincorporated community in Josephine County, Oregon, United States, just off Interstate 5). He stayed there and the door to the room he stayed in is on display but roped off. I’ve stayed there as well – thought about getting up in the middle of the night and crawling in his famous bed – but I didn’t. You may wonder why I’m talking about Jack London on my food page. 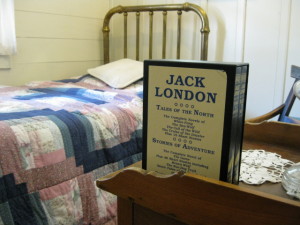 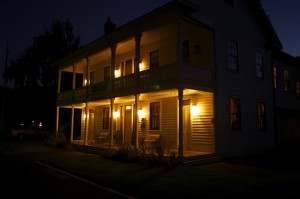 I think being addicted to the instant rather than ultimate, explains why we eat what excites us rather than the healthy stuff. We claim to want to be healthy, to want bodies that the diet books claim we can have. But that would mean we go for the ultimate. Judging by the obesity rate, the rising heart disease and diabetes statistics much less the profits the makers of junk food and the fast food companies are raking in, I suggest we would rather have the ‘instant.’

Might as well quit buying those get thin diet plans and just admit we  – like Jack London – are into ‘instant’ and not ‘ultimate happiness.’ 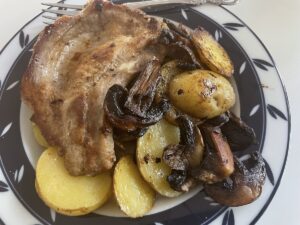 Well, just look at that. You can tell I love pork chops, yellow potatoes and mushrooms. I’ll eat mushrooms with anything and everything or alone. I like yellow potatoes because I don’t like to peel potatoes and I can eat the skins on the yellow ones. It’s not only a matter of lazy, but one of added fiber and nutrition.

The mushrooms and the potatoes are so tasty when I pan broil them with the pork chop. I can tell you that if you found a restaurant that served this tasty plate of food, you would encourage all your friends to go there. I can eat it as often as I want in my own kitchen in less than ten minutes and for less than $3.00. Sometimes I fix chicken, fish, lamb or beef – but two days in a row I had pork. 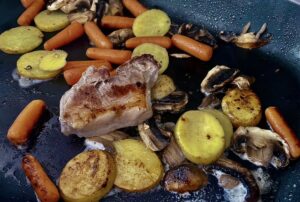 I just finished listening to an 18 hour Great Courses recording called “Food, A Culinary History.”  It was wonderful.

It, and many books I’ve read recently, talk about our eating habits today come from the need of convenience. If it isn’t convenient, we don’t do it. But, I’m not sure that is the root of the problem.

Take a look at the lunch I fixed myself today. I took a pice of meat, sliced up a yellow potato (no, I didn’t even peel it first), threw in a handful of carrot cores (yes – they started out as big carrots and were pared down to little ones), sliced three mushrooms and threw them into my electric fry pan. 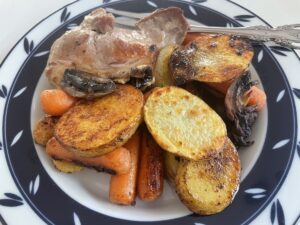 Do I think that was inconvenient? No, I don’t. The whole thing probably took less than 10 minutes and cost less than $3.00.  I didn’t have a pan to wash because I don’t wash it after every time I use it. I had one dish and one fork to put in the dishwasher. I not only made a good honest meal from scratch without being inconvenienced, but I didn’t have any boxes or plastic bags to throw in the garbage.

My grandmother had ten kids and not much money. She didn’t like being inconvenienced and didn’t really like cooking either for that matter. So she cooked the lazy way  – just like I fixed my lunch for myself. Neither one of us spent hours looking up recipes and putting different ingredients together to create  spectacular culinary treats. My own mother had only two children but she cooked the easy nutritious way too. I had four children and I followed suit.

I don’t think it is convenience we are after because you can prepare good honest healthy meals from scratch and not be inconvenienced. I think people are hooked on the salt, sugar and fat of processed and fast food.

I made a deal with my body that I wouldn’t throw food into it that it couldn’t process. That’s what it’s about. 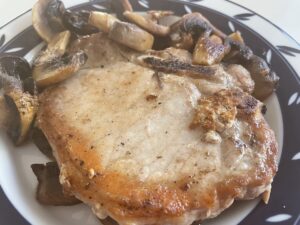 Any day that has a pork chop and mushrooms in it is a good day. Wasn’t today, but it was yesterday and that’s close enough. Topped off the day at 1185 calories, but they were plain food enough that I dropped two pounds four ounces. The small Heath Blizzard I ate the day before, caused a 7-ounce gain. It had been two or three years since I had had a Blizzard. It was tasty, but not so tasty but what I’ll wait another two or three years for another one.

A hamburger and broccoli day – 650 calories so far. Hope my interest in other things keep me from getting hungry prematurely. I don’t do hunger. I just know my body so well that I know what it likes to process, and it isn’t Dairy Queen Blizzards.

I tell myself all the time, “Toots, you’re lucky when it comes to meal planning because you live alone.” Of course, the rub is, you don’t really live alone. You live with your heart, liver, stomach, kidneys, bones, and muscles.  That’s quite a group to feed in a way that makes your body work.

I read a really good book called “We Are What We Eat,” by Alice Waters. What I got out of it more than talk about specific food, was her realization about how bloody lazy we are. She said it nicer than that but it’s what she meant. What she really said is, we were into convenience. Translated, that means we don’t give a rip about what our body needs, we just want to take the lazy-ass way out. 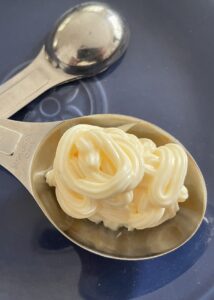 About one tablespoon mayonnaise – I probably put two in my salad at lunch.

This morning, I weighed myself, Oh! Not good. “OK Toots,” I said to myself. “We’re going to pay attention today.”

Breakfast: One tangerine (40 calories) and one cup black coffee = 40 calories

“Think that will do you till dinner time?” says I. ” Well we’ll just see,” I answered back. Sometimes I can sail smoothly through the afternoon and sometimes I can’t. Always interesting to see what the day brings. Can’t keep snacks around, because I’m programed me to eat them. What will I eat the rest of the day? I don’t know. For me to lose weight, it can’t be much. Will have to stay between 700 and 800 calories. Will this be the day for that? Just have to wait and see.

Had a great one-and-one-half-hour phone conversation with a friend – revved me up. When I’m raved up,  I don’t get hungry.

Dinner: So, by late afternoon I had an egg (80 calories) wrapped in two plain tortillas (100) and at dinner time had a sweet potato with a little butter on it (150).

You would think that a 750-calorie day would be a day that weight would drop off in chunks but instead it was a day I gained one ounce. My body doesn’t function well, so I’m never surprised. Im’s like a furnace that doesn’t draw. If my body was a furnace, I’d junk it and buy a new one.