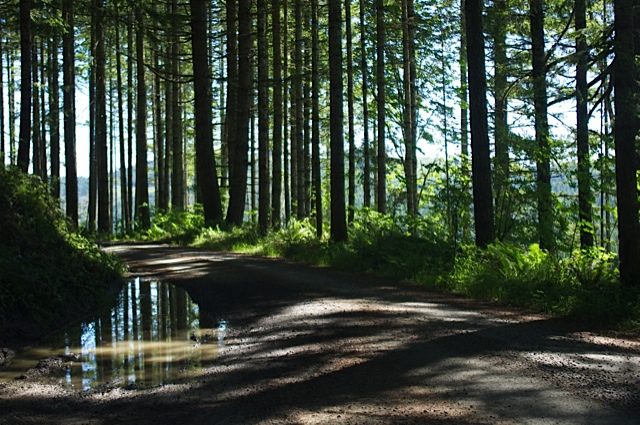 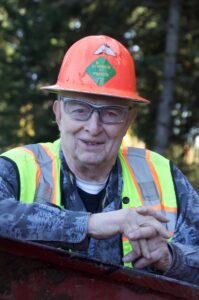 KC VanNatta, of VanNatta Brothers Logging, didn’t see the Quadco 4400 feller head on display at the February 2020 annual logging conference in Eugene, Oregon. However, his brother Robert did. When Robert told him how it would let a single operator cut and control the placement of up to 48-inch trees and then load them on the truck, KC headed for the Internet to find out how he could get one. Eight months later, VanNatta’s crew was operating the first and only feller head of its kind in North America.

The Quadco 4400 (QB4400) was invented by New Zealander Paul Ricco to harvest the fast growing but brittle and limby Radiata pine. Quadco saw the need for it in North America and about two years ago, they bought the patent, tweaked the design and started production. The Sale

“I’ve known KC for many years and wasn’t surprised that he would be interested in adding the QB4400 to his operation,” Kirk said. “As a private landowner, his 1500-acre mixed rotation operation was a perfect match, and he had a big enough machine to put it on. Because the 4400 comes with a maximum sock that can do a 50 or 55-inch bar, it will handle a big tree. One of the beauties of it is, that a logger can take his old equipment and make it ready for the 21st century and that’s what KC did. 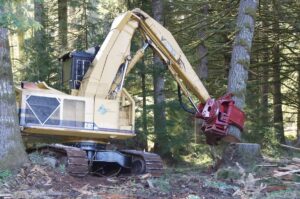 “I was there three or four different times talking to him about the machine, talking about the head, and making sure we got the right measurements so we could get the correct adapter Quadco was custom making for it. We had some challenges mounting it up to his machine because of all of the electronics involved but we were prepared for it and made it work. My main job, however, was making the calls that kept KC connected with the people at Quadco and connecting all the other dots together so things could go as smoothly as possible.

“KC has done some pretty amazing things out there already. It was so amazing to watch him work. He knows exactly what he wants to do, understands what’s best for his property and is very well set up to do it.”

VanNatta Brothers Tree Farm, located near Rainier Oregon, was developed on property George VanNatta bought and moved his family to in 1940.

“My dad, who was a lawyer, and his building contractor friend, had two things on their mind when they bought the land on which we still operate,” KC said. “They wanted to get their families out of St. Helens before the war broke out, and they wanted to follow their dream of starting a cattle ranch. The land they found was covered with willows, maples, snags and black stumps from a previous forest fire and defective Douglas fir that the Deer Island Logging Company had rejected. Dad ended up buying his partner out and going it alone and we ended up developing the property as a tree farm/logging operation. I still run a few cattle in the trees, just to keep the grass down. 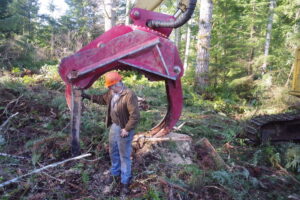 “My interest in the QB4400, is that I can harvest and load both the big ones for the domestic market, the smaller eight to 19-inch stuff for export and do it all with my three-man crew. Before, to do the same things, I had to bring in two tree fallers at $700 a day.  An additional savings is that because you can control the way the tree falls, we don’t get the damage we had before with the other felling methods. All of those things add up.

“Some of these big Douglas firs were head-high when Dad moved me here as a five-year-old. Son Jeff is running the machine and it’s been a steep learning curve for him.  He’s finding out It’s all between the operator and the tree and you have to get everything right.” 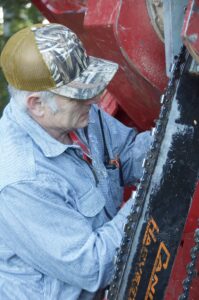 Jeff VanNatta, who was born and raised on the family tree farm, has been the sole operator to date.  Armed with a degree in Industrial Safety and Health from Oregon State University and seven years of night school courses in nuclear machining, he is the most experienced running their Cat 330-BFB forest machine.

“It is easy to operate. You can let go of the trigger and the bar will come back and then pull a trigger again and it’ll go back in and cut some more. You can sneak up on it that way, but you can also cut too much at one time and then you have an issue. You can see the tree start to move, but you may still have four inches of wood left. If you don’t get it cut down to maybe an inch-and-a-half or so it’s going to split up the side of the tree. It’s one that everybody has to figure out. 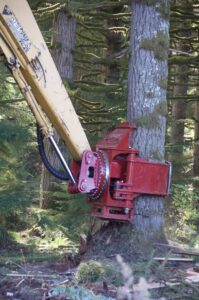 “On the smaller trees, upwards pressure before sawing causes the tree to turn off-stump. On the larger trees, you watch the sawdust for the color of the bark. But it’s falling trees over 36-inches where the QB4400’s 270-inch saw rotation really shines. This means you can place the head against the right side of the tree, swing the saw all the way out, cut the face and then move the head to the back side and fall it.

“The operations manual hadn’t been written yet and there wasn’t anyone around that had ever run one, so I bent the bar on the very first tree I fell. Now I carry an extra bar and lots of extra chains so I can change them in the woods. My advice is to have spare bars and extra chains and maybe a fifty-ton press for straightening bars.”

and threw water on everybody’s fire,” Joel said. “The beauty of this product is you have basically a controlled fall head so you can lay the tree where you want it. With a regular felling head, you’ve got to be pointed the correct direction and then once you cut that tree off the stump it’s going, its falling. It’s free falling and it crashes to the ground. This machine places it on the ground. It’s just a great multi-purpose tool.

“The QB4400, manufactured in Kamloops, B.C., takes Quadco about a week to assemble from the time it’s a piece of metal until final assembly. They are assembling them now, so I expect to see some at our facility, probably in January. We are also working on a 3500 and a 2500 so we will have a small, medium and large.”

The Quadco Group, which showcases Quadco, Southstar, Log Max and Keto, is located in the brand-new Port of Kalama industrial complex in Kalama Washington. The 22,000-foot facility includes the show room, parts, service and installation all under roof. For more information on the QB4400 call Joel Dupre’ at 360-699-7300

Photos by Jan Jackson and Robert VanNatta; as published in TimberWest Magazine and Logging & Sawmill Journal.