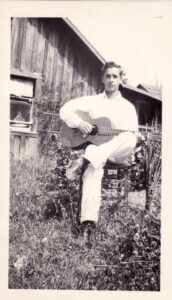 My father as a young man.

I remember everything about the day I got the call that informed me that my dad had cancer. I hung up the phone, folded my arms on the table, laid my head face down on my arms and cried. His dying was a three-year process, but how he accepted the verdict made an impact on me.

My dad was a regular one-of-a-kind guy though I’ve never met anyone like him. He was his own man who listened to his own drummer. He was a musician first, but that didn’t impress me because we were all musicians. He was an introvert who liked to entertain people. That was no big deal either because we were all like that. He was not influenced by what his friends and neighbors did, but none of us were. The way he accepted the news of his death however, helped shape my life.

This is what he did.. 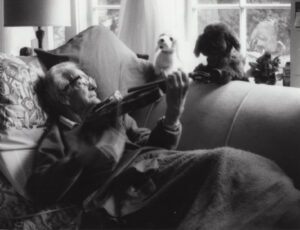 The last time he was admitted to the hospital was the last time because his next trip was to Hospice. He did not want to go. He wanted to go home which he couldn’t do because my mother was in the hospital getting a pacemaker and so there was no one to take care of him. I was the one who had to put him in Hospice. Had I not been made in his mold, I couldn’t have accomplished it. We were locked into the issue. He said he wanted to go home. I said that I understood it, but it could not happen. This went on and on. At the point he saw that he had no choice, he said ok and meant it.

One Pan Annie on Frozen Vegetables