UppityDogWear – For the Love of Frankie 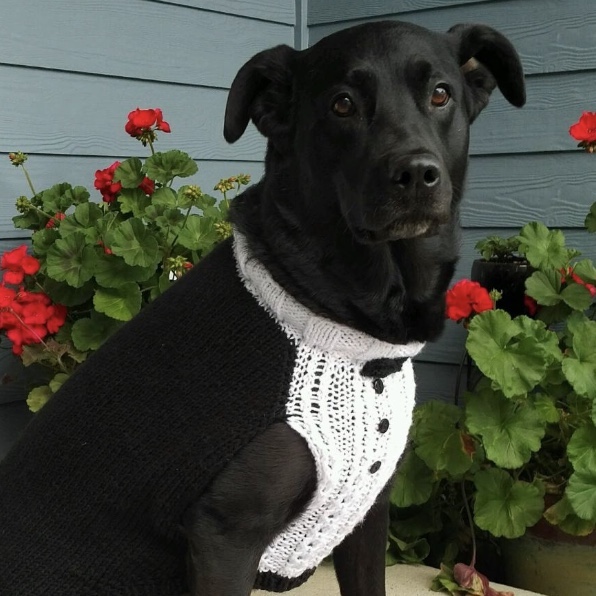 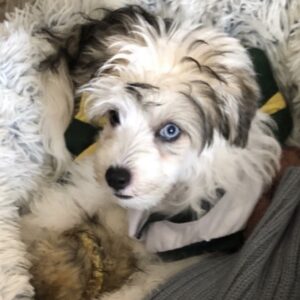 I met Frankie when I knitted her an Oregon Duck sweater. Well, it was a texted image-meeting, but it was still love at first virtual sight. She is the cutest dog I ever laid eyes on. Turns out she’s a Chinese Crested Powder Puff – I had never heard of one and certainly hadn’t seen one, but they have my attention now.

Frankie, named after Frank Sinatra because of her beautiful blue eye, was born in Ocampo California on September June 24, 2020. She lives in a San Francisco Nob Hill apartment with her owner Marilyn Hommes. Marilyn, who works in Artificial 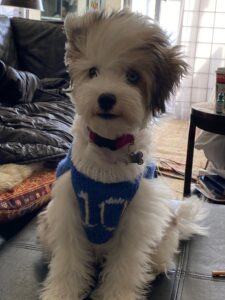 Intelligence/Machine Learning, didn’t have a breed preference when she found Frankie, she just wanted a puppy. To prove it’s not what you know but who you know, one of her best friend’s brother is a breeder of Chinese Crested Powder Puff dogs and he brought a couple of puppies with him when he came to visit.

“I picked Frankie for two reasons,” Marilyn said. “She was the friskiest and she had that one beautiful blue eye. Bill and Taffy McFadden, her famous breeders/handlers of numerous types of dogs, have won “Best of Show” in number of ties in National dog shows. Frankie wasn’t eligible though because of her one blue eye condition called Heterochromia iridis  especially noticeable in cats and dogs). She is strikingly gorgeous.”

Since the Chinese Crested origins go so far back in time, no one can really give anything but an educated guess about how the breed was  created. However, they say Chinese trading vessels traveled the high seas with the Cresteds onboard. The dogs became famous as shipboard exterminators, as they were expert at catching disease-bearing rats. The were traded among sailors in seaports around the world and, along the way acquired the name Chinese Ship Dog. There is a hairless Chinese Crested, but as you can see, Frankie is of the coated variety. 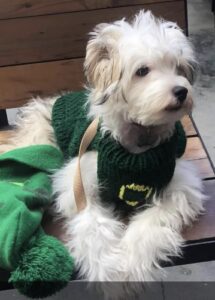 What does Frankie like to do? Well as luck would have it, she lives right across the street from Huntington Park and she is busy figuring out her favorite places to walk. She also loves sharing Marilyn’s love of sports. A graduate of University of Oregon, Marilyn helps Frankie follow the Oregon Ducks and Justin Herbert who is former Duck quarterback and now rookie quarterback for the LA Chargers. You can see the pics of Frankie wearing her Oregon Duck 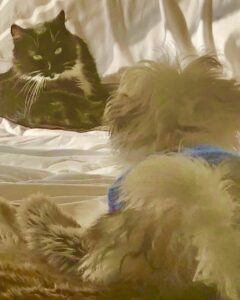 and her Justin’s #10. She and Marilyn also follow the NBA Golden State Warriors so there will probably be a new sweater coming to Frankie’s wardrobe.

Don’t get the idea that walking in the park and following sports is the only thing Frankie likes to do. She loves Jeopardy, the Queen’s Gambit, Dream Bones, Frank Sinatra, Biden-Harris and biting. She is great at playing fetch, loves to run around like the Road Runner (beep beep).

.You can follow her  on her own own Instagram account @  Frankie_the_Powderpuff. Oh, and she does have two pet cats (Elvis and Scarlet) –  but they aren’t BFF at all yet.

You can find Frankie’s sweaters (and more sweaters like it), at UppityDogWear@etsy.com

One Pan Annie on Useless Snacks