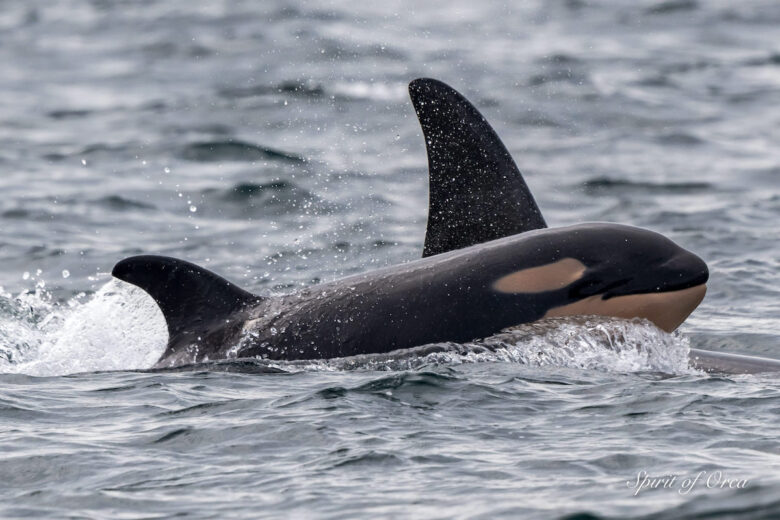 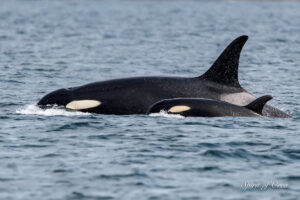 What a wonderful day with Super Pod 2020 and a new baby calf. The second time in a month we have had a Super Pod (the last one prior to this was in 2016). I got to see the new baby today. We actually saw two babies. The brand-new baby of J35 Tahlequah that Captain Sarah McCullagh first spotted a week or two ago, is the one that is pink in the eye patch and other white parts.

Tahlequah is the mom who birthed the baby girl two years ago and it died after a half hour. Tahlequah then went on to carry her baby girl on her head for 17-days before finally letting go. So happy this turned out to be a good outcome with this calf.

The other calf belongs to J31 Tsuchi. Her calf born last year is Tofino. It is still small and is among the first calf pics in my blog but is not as pink as the smaller one. Tofino got its name because it was first spotted off Tofino, B.C. 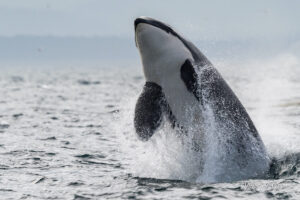 There was lots of foraging for salmon going on and it was nice to see them catching fish. The seagulls were hovering over them after a catch to get any tidbits left behind. 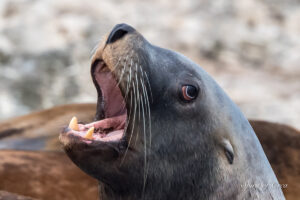 There are a few pics of other marine life including GREAT BLUE HERON, BALD EAGLES, STELLER SEA LIONS and HARBOR SEALS. I also snapped a shot of our United States Coast Guard as they flew over in a helicopter. 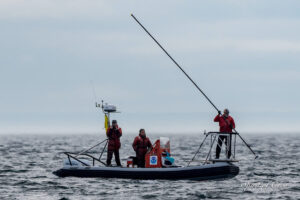 It was both sad and aggravating to see NOAA (U.S. National Oceanic and Atmospheric Administration) out there yet again harassing the whales by motoring up over their backs and stabbing them with a 20-foot pike pole to attach a tag on them. I have seen this crew riding the whales wake and making the whales mad. The whales were slapping their tail flukes showing their displeasure at have a boat over the top of them.

NOAA scientists are the only ones who practice this invasive type of study. At least they are no longer using a crossbow with two four-inch bolts shooting into the whales. A man in the bow of the boat did just that four years ago now, killing a 20-year old endangered species male named L95 Nigel. 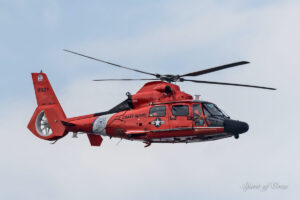 NOAA is charged with the responsibility to assist in the recovery of the Southern Resident Killer Whales and several species of endangered salmon. They receive millions of dollars each year and they squander it on study after study after study, fortifying their careers instead of actually doing something like say put more salmon in the sea so the Southern Resident Killer Whales can survive. They oppose the breach of the four Snake River dams which would also bring back more salmon for their winter food supply but that would mean a loss of millions in the coffers of NOAA and Bonneville Power Administration in maintaining those dams.

However, I have always applauded NOAA’s meteorologists who do an awesome job at predicting the marine weather and keeping mariners safe on the oceans and even here in the Salish Sea. Even in my early years as a captain, we used to get a weather FAX and you would know how good the forecast was by the signature of the man or woman who signed it. You got to know who you could count on for an accurate forecast. It is a shame these folks are linked to the NOAA fisheries folks who are utterly failing decade after decade with zilch for results in bringing back our endangered species squandering millions of taxpayer dollars every year.

To learn more about Captain Ken, visit Spirit of Orca

Whale Tales – The Chase Is On – Orcas vs Minkes