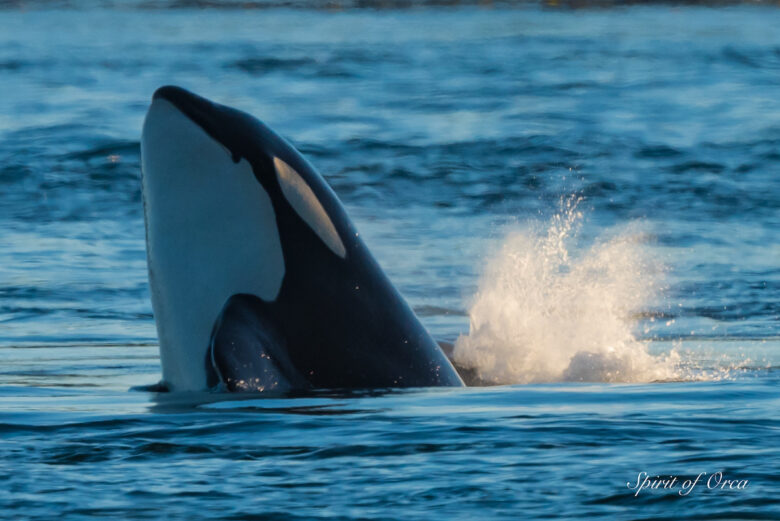 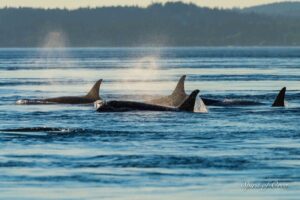 We were in a glassy Strait of Georgia then Ks and Ls at Salmon Bank in the afternoon. My pics start off with a Black Oystercatcher seeming to be teaching the chick how to seek out morsels from the crevices with the rocky shore. Mom finds a morsel; chick is saying, “What you are you doing mom?” Mom sets morsel down, chick picks it up and eats, then follows mom around again.

HARBOR PORPOISEs are hard to capture with the lens, but I did get one shot good enough to see what it was. Then Patos Lighthouse with Mount Baker in

A HARBOR SEAL pup at Skipjack Island and then K and L pod whales south of San Juan Island. There are a few other critters in the mix including a CORMORANT with its towering nest. A STELLAR SEA LION and a RHIONOCEROS AUKLET with a few fish for the days catch. 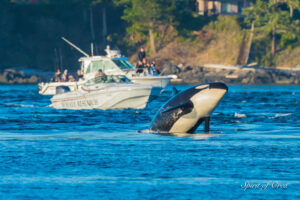 I am including a few pics of the Center for Whale Research senior scientist Ken Balcomb at work with the whales. If you have seen the movie “Blackfish’ and or “The Whale – The Story of Luna” you saw Ken advocating for the whales. Ken is far and above the most knowledgeable person when it comes to knowing our Southern resident KILLER WHALES.

NOAA fisheries has been squandering millions in Endangered Species monies every year. They were entrusted to bring back the resident whales from endangered status and all they have to show for it is 20 years of studies, directly killing one of our resident whales and indirectly killing others by their inaction. If they would just follow one piece of Ken’s advice and breach the four Snake River dams, that alone would bring back enough salmon to sustain the southern residents

In my pics, you also see another boat right in with Ken. I captured a breach that Ken missed seemingly because he was distracted by another boat that should not have been next to him.

I was about to see L97 Onyx for the first time this year. One shot of him has Mount Baker in the background. He started “porpoising” for a couple of miles to catch up with his family that was starting into San Juan Channel. 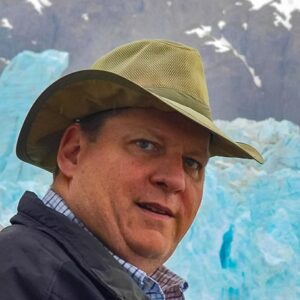