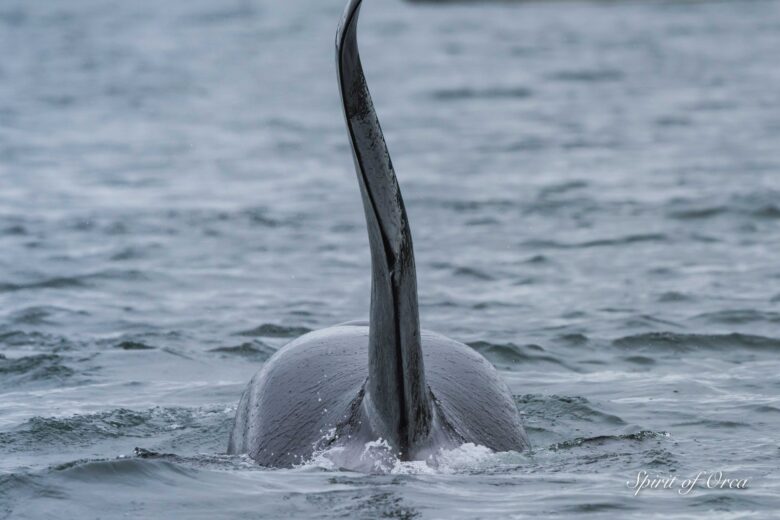 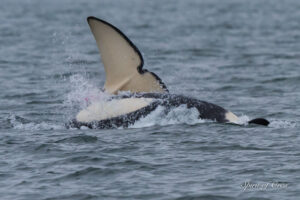 Today we saw sea birds, T65As, T46s, and much more. It started off great with news of a pod of Orca near Discovery Island on the Canadian side of the border (we hoped they would travel a typical northeast path and cross over into USA waters).

This COVID virus has shut down our ability to cross back and forth even though we don’t come in contact with another vessel or touch land. It hurts the Canadian boats when we have whales here at San Juan and it hurts us (as in today), when there are ORCA just across the border, but we can’t go see them.

The pod didn’t come our way.  Instead, it turned southwest and headed back out towards the ocean. 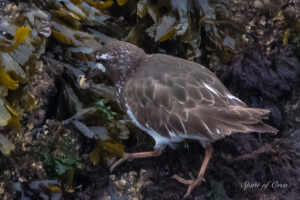 None of our San Juan Island boats found ORCA on the morning tour. We saw a beautiful BROWN TURNSTONE dip his head into a dark crevice and come out with a tasty morsel (I assume). A few BLACK OYSTERCATCHERS, including a chick, but this was a different one. The one I have been keeping tabs on already has mostly feathers and is looking like an adult other than its juvenile beak. Today’s chick still had a lot of fuzz and was obviously younger. 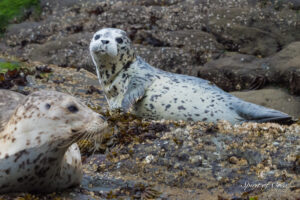 There was a pod spotted near Oak Harbor. Then, later another pod in Saratoga Passage also near Oak Harbor heading north. My plan for the afternoon tour was to head towards them even though the wind-wave outlook did not sound great. Once headed that way though, it was not that bad. The whales did not cooperate though and stalled out at Penn Cove near Oak Harbor.

On the way to see them, we spotted a GREY WHALE and stopped for a couple of views but did not work our way in, rather viewed from a distance. 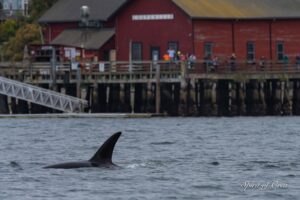 I had hoped they would continue north and eventually be within reach for me to call my morning guests and run them out to see them. That plan did not come to fruition and the trip back was pretty sloppy water so took a while to get back. I think it was and hour and forty-five minutes down there and nearly two hours coming back. It was worth the trip but definitely a rough ride.

While there, we saw the T46s for a bit and then the T65s showed up in a dramatic way. When the two pods got together, it seemed there was some mating activity going on as you can see in a couple of pics. We were right of the town docks of Coopville and many people were on the docks observing as well.