Whale Tales – J Pod and the US Coastguard 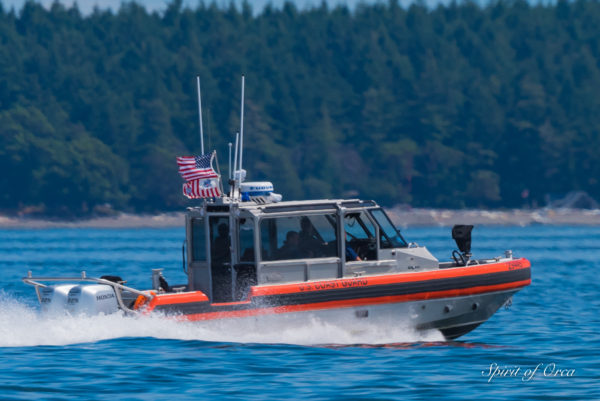 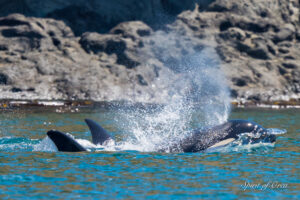 Today, we viewed J Pod and the United States Coast Guard (USCG) in Haro Strait. Then, the Strait of Juan de Fuca on the second tour. We spent some time with J Pod arriving from Canada into USA waters and at one point the USCG vessel #29445 entered onto the scene. They observed for a bit then approached the research vessel from SR3. SR3 vessel was flying its NOAA-Fisheries federal permit flag. NOAA is the National Oceanographic and Atmospheric and Administration.

The research vessel showed them their permit flag with NWFS at about twenty yards. They seemed to get the message, but they then kept 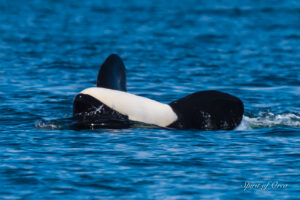 pursuing the vessel viewing the whales. I called the USCG vessel on VHF 16, letting them know that the vessel they were trailing had a valid federal permit to be with the Southern Resident Killer Whales (SRKWs). Also, that they were now to longer involved in their policing activities and were now whale watching and no longer exempt from the federal 300-yard separation from SRKWYs. They backed off and trailed for a bit but then took off at high speed also violating state and federal laws of the safe speed of 7-knots or less within a half-mile of SRKWs. Because they were not currently involved in USCG policing activity at that moment they violated federal laws protecting the Southern Resident Killer Whales.

Aside from that episode the time with the Rezzies today was pretty remarkable. I at one point caught up with J38 Cookie just as he was crossing over into Canadian waters which at this point due to COVID 19 restrictions we are not able to cross the border. Hoping that will end soon.

We saw most of J Pod in the morning but later after leaving the dock an hour late I was nearing the pod in Juan de Fuca, but the seas were getting pretty rough. It was a slow go and hard to spot the whales in those conditions, but I did find some. Two other vessels ending upcoming my way to view them as well. I decided not to continue on when they pointed their way into the heavy seas and turn back looking once again for J117 Blackberry who had been seen just before our arrival.

The whales didn’t seem, to mind the weather at al playing and cartwheeling through the waves. I don’t get many good shots with the boat being tossed around but there are a few here.