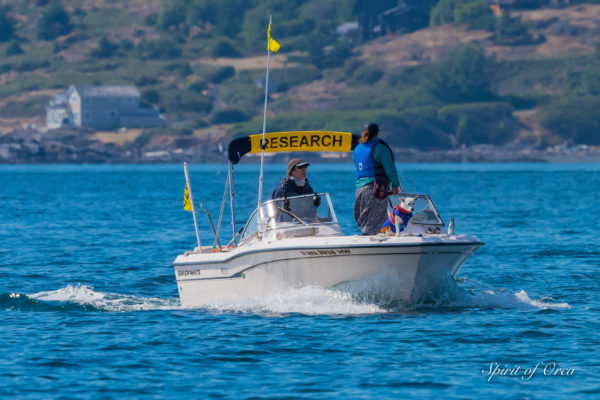 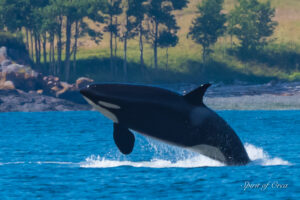 Wow, a nice day to spend with our most beloved J Pod (also known as the Southern Resident Killer Whales) and the whale-poop smelling dog Eba.

On the way out, we saw harbor seals, bald eagles and a romp of river otters.

We saw J27 Blackberry, the big male in the group and J26 Mike and another big male named after Canadian Marine Biologist Mike Bigg. We 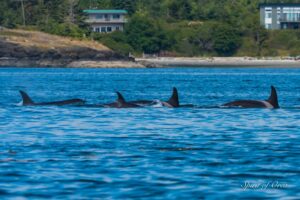 saw J22 Orca and her son J38 Cookie, J41 Eclipse, and our newest calf J56 Tofino and his mom J31 Tsuchi. Tofino got his name because of where he was first spotted near Tofino BC on the west side of Vancouver Island.

We saw J35 Tahlequah and J47 Notch, who is the son of Tahlequah. Tahlequah is the mom who gave birth to a calf that died a half-hour later. It is common for a mom to grieve for a day or two carrying her baby around, but Tahlequah carried her baby girl for 17 days straight grieving leaving many to believe she was experiencing a mental breakdown she would not recover from. 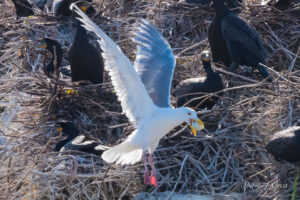 We saw Eba, the whale poop sniffing dog and her team of researchers Giles and her husband. The girls on today’s tour were going to watch Disney’s “It’s a Dogs Life” tonight featuring Eba and Giles. Dr. Deborah Giles and Eba are working with the University of Washington’s Center for Conservation Biology – Conservation Canines https://conservationbiology.uw.edu/conservation-canines/

I stopped by the cormorant colony and we found a juvenile bald eagle diving on the colony and seagulls were diving on him. In the confusion of it all, I happened to catch a seagull flying off with a cormorant egg. Looks to be a Brant Cormorant egg but would have to see it better to be sure. 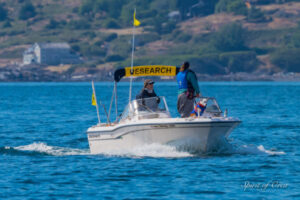 Learn more about Eba and how her work is important to the health of our whales here at this link https://www.wildorca.org/eba/ Thank you Eba, Giles and Jim for stopping by to say HI.

The girls on today’s tour were going to watch Disney’s “It’s a Dog’s Life” tonight featuring Eba and Giles. See the trailer at https://www.youtube.com/watch?v=Ptlg57Ilpso