The Death of the Mule Deer Fir 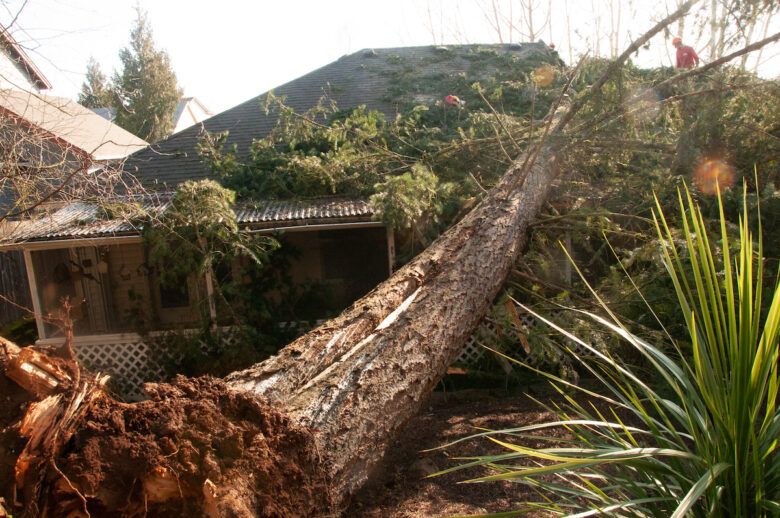 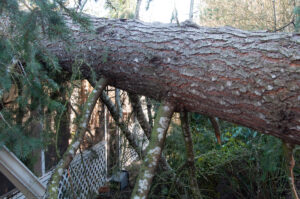 A light rain began to fall as Robert and I arrived at the scene where the giant Douglas fir fell.

“Rain on a damaged roof . . . not a good thing!” Robert said bringing his four-wheel rig to a halt.

“Yeah, dratted rain” I noted adjusting my parka to cover my head as I emerged from the passenger side.

Robert, expert at anything dealing with trees, laughed at my  aversion to a little water falling from the sky. Rain to a seasoned logger in Western Oregon is as common as breathing.

We were there to inspect the damage an 80-foot Douglas fir had caused when it fell on our friend’s house. 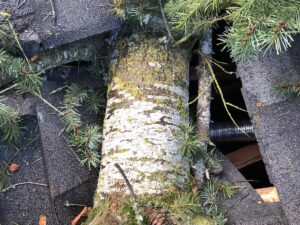 As we rounded the corner to the back yard, I couldn’t help but gasp. There it lay. Its fall had made a large gash where it penetrated the western and eastern slopes of the roof. The large branches that punctured the roof had also entered and essentially destroyed the bathroom ceiling below

“Wow, Annie, is a fortunate lady,” I said peering at the carnage through a gap in the exterior wall.

We learned later, that she had made a quick trip to the grocery store, thus was away when the tree fell.

The sun was beginning to burn through the shallow clouds. 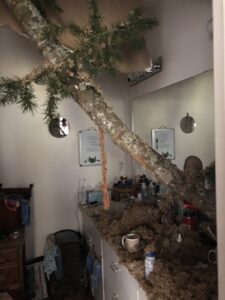 “Yeah, for now,” Robert said. “But Oregon being Oregon, it will soon return.  She’s going to have to get the big equipment in here toot suite so they can get that roof covered.”

“Wonder what caused the tree to come down,” I pondered. “From here it looks healthier than Arnold Schwarzenegger,” I paused expecting an appreciative laugh. Robert’s mind was on the tree.

Robert had moved along the trunk of the tree examining the limbs and bark. He paused near the upended stump. “This tree has been dying for a long time . . . I’d say the tree was about 15-years old when it was damaged.”

“How do you know that?” I asked a bit skeptical.

“Not exact science, but from the uphill side you can see where something made a gash in the bark. At this point,  we try to count the rings from the bark to the injury.” 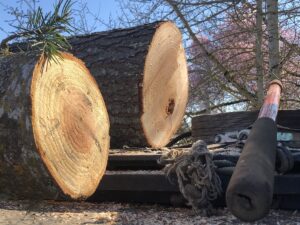 “The sap oozes a protective coating over a wound…”

“Like an organic band-aid,” I noted proud of my clever insight.

“Yeah, that’s good Arnie… like a cancer, which almost immediately began to ulcerate and rot the good wood. You could say the tree rotted from the inside out.

“ At any rate it encased the bark edge and continued to cover the wound with healthy growth.”

“The giant coverup,” I smirked hoping to entertain Robert. Of course he ignored me and continued.

“Back in the day in the logging business, when high climbers had to climb the tree and cut the top out of it, trees like this were a major cause of causalities. The climber had to stay up the tree as the top fell off.

“If the tree had a rotten spot in it, the shifting and swaying could be enough to finish it off in which case the climber who was way up there found himself tied securely to a falling tree. The end story, was never a happy one.”

“Yeah, it is pretty amazing. But it’s all a part of nature’s cycling and recycling. If this were a forest, this tree would have provided habitat for all kinds of critters. And when it fell it would have lain there until it all rotted and returned to soil.” 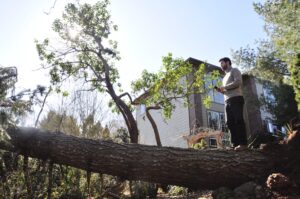 “Can’t she ship it to a sawmill and earn money toward a new roof?” I asked  innocently.

Robert laughed his deep incredulous laugh, “You show up at a sawmill with this and when the log scaler got done deducting for defects, you’d wish you had set it aside for cordwood.”

Robert and I had no more time for on-the-spot speculation as Mt. View Tree Service was creeping its way up Mule Deer to position the crane, lift the tree off the house and haul it away.

It was clear that the house would soon be draped in plastic to await the teams of builders, roofers and painters who would be swooping in to repair the damages done by the, now famous Mule Deer Douglas Fir.

Is your fur baby warm enough in our almost spring weather? Better have plenty of UppityDogWear hand knitted sweaters on hand – smile. Available with postage free shipping at UppityDogWear.Etsy.Com

One Pan Annie says “Just Do It”