By Morris Pike and Arnie 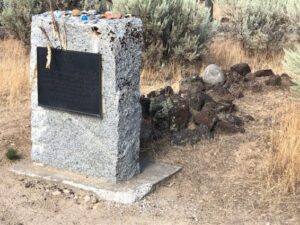 “Jean Baptiste Charbonneau . . . give it those French nasal sounds and you’re almost there,” I said as I pulled the car into the gravel parking and up to the historical marker labeling his gravesite.

“Almost where?” Arnie, my alter-ego asked hopping from the passenger side into the loose gravel. He had to grab the mirror of our Jeep Rubicon to keep from falling.

“Pretty pathetic for a National Historical Landmark!” Arnie grumbled.  “I can’t believe you talked me into driving all the way out into this God-forsaken part of Oregon. Besides that, why does anyone care about Jean Baptiste Charbonneau?”

“Lemhi-Shoshone Indian woman to be exact . . .  she was married to Toussaint Charbonneau, the French trapper who was part of the Lewis and Clark Expedition of 1805/1806. Sacagawea gave birth to Jean Baptiste “Pomp” Charbonneau in Fort Mandan, North Dakota while they were on the Expedition. ”

“Yeah, it was quite a trip . . . she acted as guide and interpreter on their quest to find an easy route from Missouri to the Pacific Ocean.” 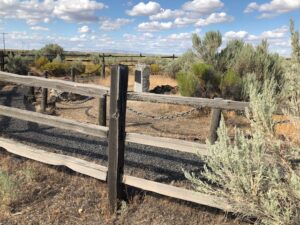 “Yeah, just a baby. Imagine it . . .  Sacagawea had to be one tough  woman to carry him all the way in her cradleboard. He was four- year- old when the party returned to Missouri. They say she nursed him until he was four.”

“Yikes! So, this monument marks the burial site of Jean Baptiste Charbonneau,” Arnie said examining the text on the wooden sign. “What’s it doing out here in no-man’s land . . . hundreds of miles from the nearest somewhere?”

“Ah, just say Jean Baptiste Charbonneau a couple of more times and you’ll begin to get it,” I said taking the few steps into the little sagebrush garden surrounding the grave. 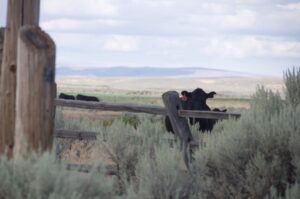 “Of romance too. Look, even the cows get it,” I said laughing at the gang of cows gathered across the fence pointing their ears in our direction.

“Well, look at them. As curious they are, if they could talk, I bet they and their ancestors could tell us about Jean Baptiste Charbonneau. They have been watching this site for 150 years.”

Arnie laughed. “And listening to other Jean Baptiste Charbonneau nuts like you.”

“Go ahead . . .  read the sign. You’ll see that Jean Baptiste Charbonneau was an exciting part of American history.” 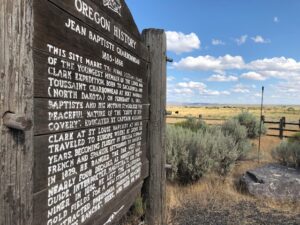 “This site marks the final resting place of the youngest member of the Lewis and Clark expedition. Born to Sacajawea and Toussaint Charbonneau” . . . 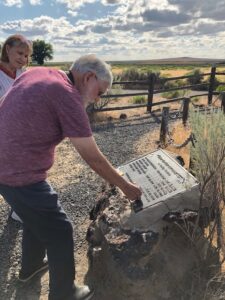 “There it is again, Arnie paused glancing at the cows who had moved closer as if to share their knowledge or glean some new tidbit of information.  “‘Charbonneau was born at Fort Mandan on February 11, 1805. Baptiste and his mother symbolize the peaceful nature of the ‘Corp of Discovery.’” Arnie continued, “Educated by Captain William Clark at St. Louis, Baptiste at age 18 traveled to Europe where he spent six years, becoming fluent in English, German, French and Spanish, returned to America in 1829.” Arnie paused as if to grasp the weight of learning several languages in six years.

“Mooooo” moaned one of the cows. 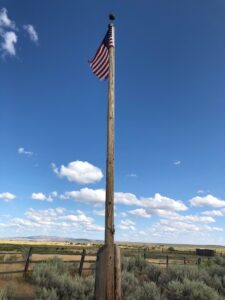 “Returning to America in 1829, he ranged the far west for nearly four decades as a mountain man guide, interpreter, magistrate and Forty Niner in 1865,”

“In 1865 he left the California gold fields for a new strike in Montana, and contracted pneumonia enroute. He got as far as ‘Inskip’s Ranch and died. May 16, 1865.”

Arnie ended the narrative and spent some thoughtful moments contemplating the complexity and ironies of Jean Baptiste Charbonneau’s legacy. “‘Indian baby surviving the grueling trek halfway across the content and back; accomplished guide, interpreter, diplomat and explorer: dies of pneumonia on the way back home.’” 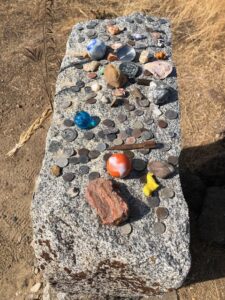 The two of us examined the artifacts left by others who had driven the miles and miles of blacktop getting to the site. Admirers of Jean Baptiste Charbonneau.

The cows had lost interest and moved away, but I was confident they would continue to graze near this landmark and come close to monitor the next visitors who came to this remote, but special place . . .  the grave site of Jean Baptiste Charbonneau.

For another Oregon story, read Morris Pike’s “The Diary of Snap Wolf” based on the real life story of OR 7 – the Wolf that walked 1200 miles across Oregon in search of a mate. Ideal way for grade school students to learn about wolves, Oregon and never giving up.


UppityDogWear – Dress for the Game