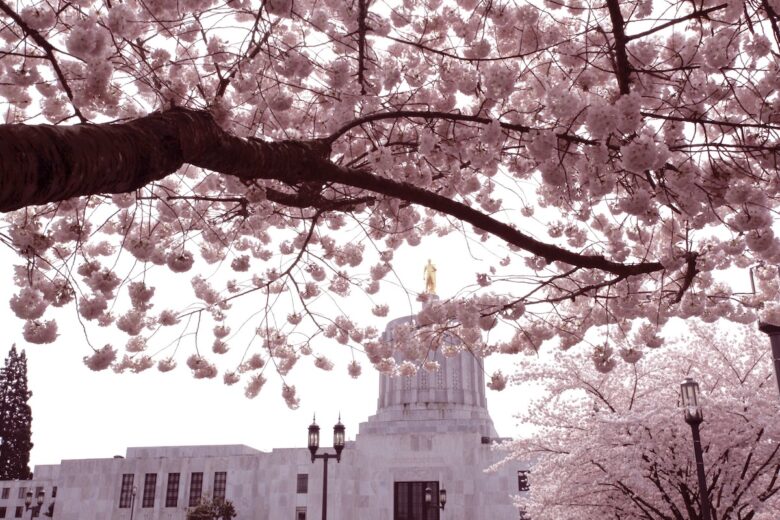 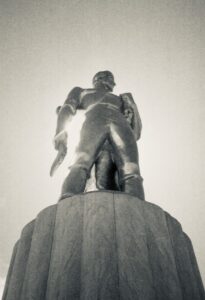 Oregon is famous for two things. The Lewis and Clark Expedition of 1805/1806 and the Oregon Trail Migration from the 1840s through the 1880s. A good place to find out more about both, is the Oregon State Capital in Salem, Oregon.

A brief history of Oregon’s government

In 1843, Oregon’s first government convened in an open field now called Champoeg State Park. Six years later, they started meeting 25 miles away in a granary in Oregon City and in 1851, they moved to Salem. Oregon became a state on February 14, 1859.

The present-day capitol was built in 1938. It’s the third one on the site because the first two burned to the ground. It is of Greek design and one of the few in the nation to be built from Vermont marble.

So, what about the big guy standing on top? The one with a tarp slung over his shoulder and a single-blade axe in his hand? He represents Oregon’s brave pioneers. He needed the tarp for shelter and the axe to clear his land.

Created by Ulric Ellerhusen in his New York studio and named it the “Golden Pioneer” (though its called the “Gold Man” in the official Smithsonian records). It was transported to Salem by steamship out of Long Island via the Panama Canal. The entire statue is covered in paper-thin, two-inch squares of gold leaf. When the statue needed repaired in 1984 (and the state didn’t have the money to repair it), Oregon school children mounted a successful fund-raising effort and raised the $40,000 needed to regild it.

The award winning photo of the Oregon Capitol during cherry blossom time by Morris Pike. For information on this years Festival (March), visit http://www.oregonfestivals.org/events/details/cherry-blossom-day-at-the-oregon-state-capitol-15671