The Anatomy of a Timber Tree 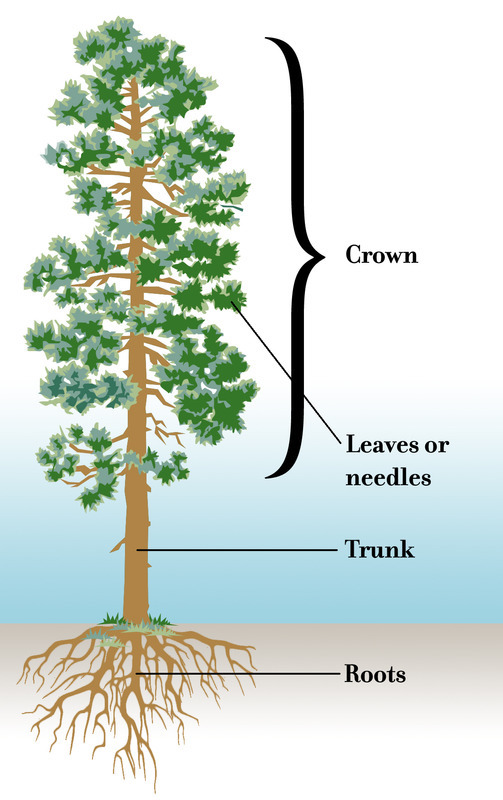 “Douglas-fir (Pseudotsuga menziesii), perhaps the most common tree in Oregon, is the most important conifer in the state because of its ecological and economic significance. The Oregon legislature recognized this when it designated Douglas-fir the official state tree in 1936. Eight of ten conifers west of the Cascades are Douglas-firs.

“As a versatile timber tree, Douglas-fir has few rivals. No tree in the world produces more wood products for human use. Its strong, relatively dense wood is used to produce large timber beams, boards, railroad ties, plywood veneer, and wood fiber for paper manufacture. Today, most Douglas-fir wood is from second-growth plantation trees or smaller trees in overstocked stands; huge beams are mostly a thing of the past.”  ( The Oregon Encyclopedia )

Oregon had more trees growing now than it did 100 years ago making it the poster child for forest management. Below is a quick lesson on how those trees work.

The leaves or needles act like solar panels, using energy from the sun to make food for the tree through photosynthesis.

During photosynthesis, the leaves also absorb carbon dioxide from the air that is combined with sunlight energy plus water and minerals from the soil to make sugars the tree uses to grow.

Supports the branches, which hold the leaves and the flowers, fruit or cones.

Underground, the roots anchor the tree. They also pull up water and nutrients from the soil

Thanks to Seneca Mills, (who just planted their 40 millionth tree) for the graphics.


Working in the Woods