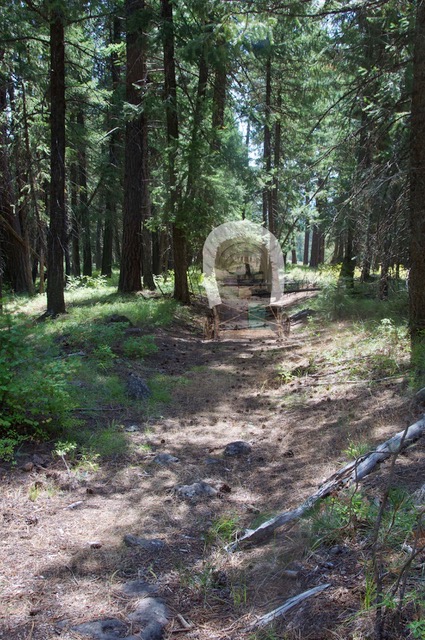 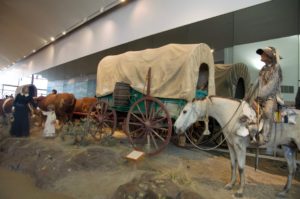 “Through all our trials, I cannot say that I have ever regretted that we have undertaken this journey.” – Asahel Munger, August 31,1839

“Asahel and her folks had guts,” my alter ego Arnie asserted as we stood reading the plaque on the wall in the Oregon Trail Interpretive Center.

“Would you have done it?”

I laughed. “You mean take the 2000-mile trip from Independence Missouri to Independence Oregon?” I paused in contemplation.

“In a way I did,” I said almost surprised at my answer.

Arnie laughed. “Yeah, sure . . .  you and your trusty air-conditioned Cadillac chugging along dusty wagon-wheel ruts over plains, through densely wooded mountains, across rivers, staying at fancy hotels along the way through Indian-infested territory.”

“Cadillac? No, a 1941 Plymouth sedan pulling a car frame converted into a canvas-covered wagon.”

“With all your belongings I suppose?”

“You could say that. My mom and dad decided to move themselves and their six kids 1600 miles from the hot, flat, dry plains of Texas to the cool, hilly, lush verdant forests of Rainier, Oregon.”

“Of sorts. For us kids it was morphing from sun-baked desert rats into soggy water-soaked ducks.” 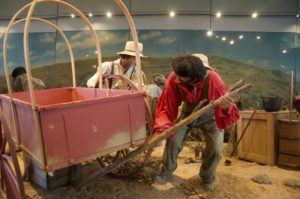 Arnie and I had entered the Oregon Trail Interpretive Center in Baker City Oregon and had paused near one of the displays depicting realistic moments along the trail.

“Well, I’ll have to admit that the difficulties we experienced on our Oregon Trail were nothing compared to the hardships faced by those early pioneers . . .  still, ours was tricky enough.”

“Look at those spokes,” Arnie pointed to a wagon wheel. “They were tough . . .  hickory, I think . . . but what a beating they took climbing over incredibly rough terrain, fallen timber, rocks, holes as deep as the Grand Canyon.

“Yeah,” I summarized. “The train could only travel roughly two miles an hour. It’s no wonder it took five months to get to Oregon.”

“Yeah, we’d have been able to do it in four days or so without that trailer,” I said. 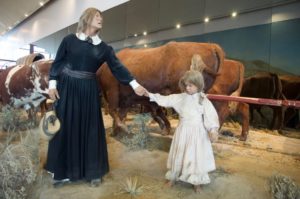 “As clean as those strong ladies could keep them. That wagon moved so slowly the kids could run off into the woods, play games and catch up with the train down the way. The men had to hunt for food and keep the wagons functioning while the boys took care of the horses, oxen and other livestock.”

“No playing in the woods for you on your way to Oregon, I’ll bet.”

“No . . .  only talk about the evolving wonder of the terrain and word games. Dad drove. My oldest brother Al helped spell him from time to time. Jerry was a baby so while my second oldest brother David and I rode in the trailer, Jerry and my sisters Carolyn and LaJuana rode in the car.

“But I have to admit, sometimes when Dad had to shift the car into low gear to get it up on of those steep Rocky Mountain grades, the car moved so slowly I could scoot down on the single step at the rear of the wagon, hop off and trot along behind it a while.”

“No! You didn’t!  Your dad and mom would never have stood for that!”

“They didn’t know. I always stayed behind the trailer so they couldn’t see me.” 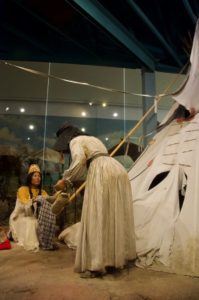 We paused by a display depicting a pioneer woman trading goods with an Indian.

“Looks like the pioneers got along with the Indians pretty well,” Arnie said gesturing at the friendly trading exchange before us. “Of course, your party didn’t have to be concerned about Indians, did you?”

“Of course not,” I chuckled, “In reality the pioneers didn’t have to worry too much either. Yeah, there was some hostility between the Indians and settlers . . . but for the most part the pioneers enjoyed friendly relations with them.”

“Yeah,” Arnie said. “There was friendly trade, but there was philosophy too. Listen to this:

‘Tomorrow dances behind the sun in sacred promise of things to come for children not yet born. For ours is the potential of truly lasting beauty born of hope and shaped by deed. Now let us lay the lance of hate upon this soil.’”

We paused at the display of 20 or so medicine bottles. “Better than nothing,” Arnie noted.

“Better not to get sick,” I concluded moving on to the next display.

The park system had done a splendid job of capturing the history and ambience of the Oregon Trail. The displays and videos in the wonderful facility had taken us on a virtual journey that left us feeling like pioneers. 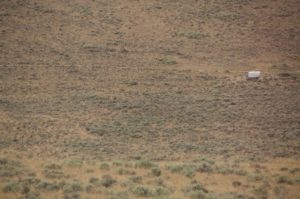 Not far from the Center was a wayside historical marker that pointed us to actual wagon tracks made by those covered wagons. Yes, there they were . . .  like lingering phantoms from the past . . .  reminding us of our history.

As we drove back to the highway, I was reminded of the winding twisting route our canvas-covered wagon had taken from Texas to Oregon those nearly 80-years ago.

Arnie was quiet. He knew that I was ruminating on the words Asahel Munger had penned 180 years ago…

“Through all our trials I cannot say that I have ever regretted that we have undertaken this journey.” 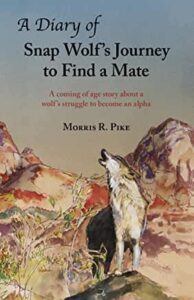 For another Oregon trail story, read Morris Pike’s “The Diary of Snap Wolf” based on the real life story of OR 7 – the Wolf that walked 1200 miles across Oregon in search of a mate. Ideal way for grade school students to learn about wolves, Oregon and never giving up.


Dirt Sailors on the Alvord Desert