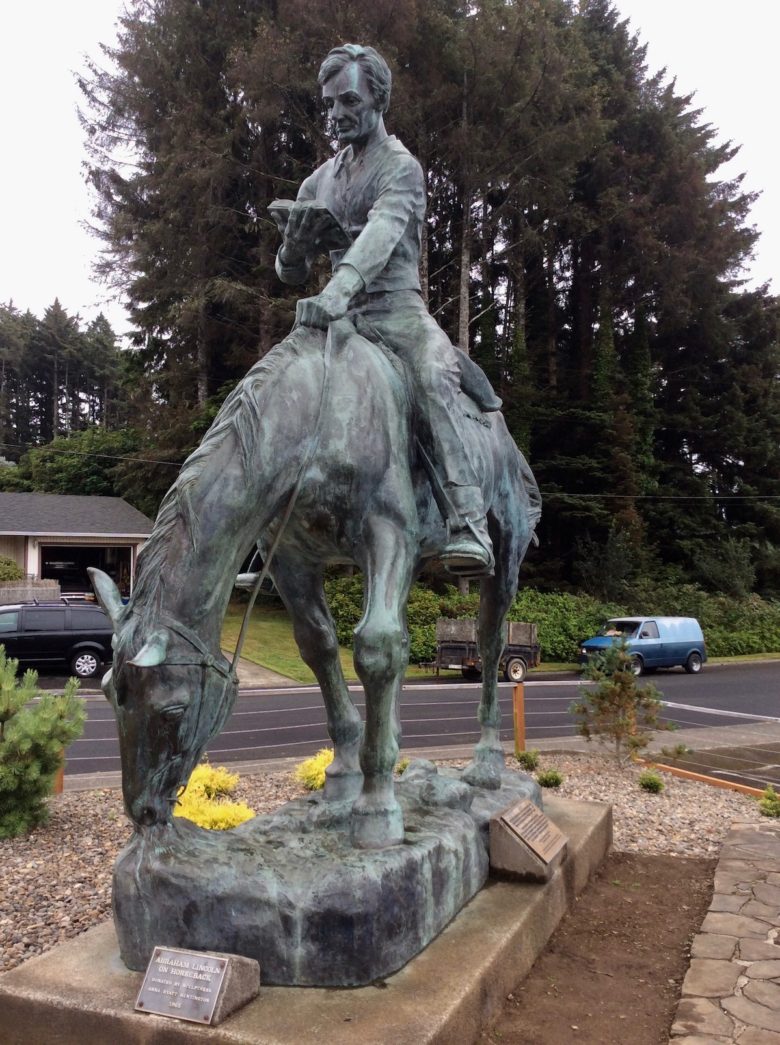 This interview is reprinted with permission from the July 1989 issue of The Traveler’s Times. 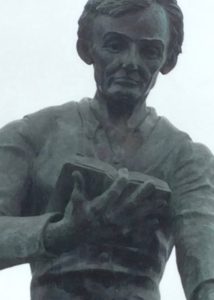 TRAVELER’S TIMES: Mr. Lincoln, I’m curious about you and why you are here. Do you mind if I ask you some questions?

MR. LINCOLN: I don’t know if I will know the answers but, I’d be pleased to try. Besides that, I like company.

TRAVELER’S TIMES: You came from the Illinois prairie which is very different from the wet and windy Oregon coast. Has it been tough to endure the damp salt air?

MR. LINCOLN: No. I like it here. Let me tell you, when those blustery squalls are over and that sun re-appears, the world out there looks fresh and new again. Yes, I like it here very much.

TRAVELER’S TIMES: I understand you almost came here as governor of the Oregon Territory. What was that all about?

MR. LINCOLN: Yes. In 1849. Of course, it was pretty rough out here then and when Mary didn’t want to bring our babies out into the wilderness, I just went along with her wishes.

TRAVELER’S TIMES: Do you think the course of history would have been drastically altered if you had come west? 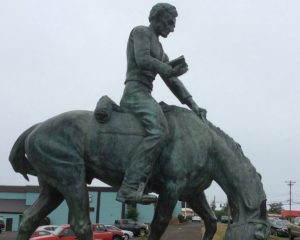 MR. LINCOLN: Well, you can’t look back. But I think staying where I was helped the causes I was working on.

TRAVELER’S TIMES: Your sculptress Anna Huntington is famous for her equestrian statues and you have always been at home on a horse. Are you pleased with her treatment of you?

MR. LINCOLN: Yes, she was a fine artist and her own love of animals, especially horses, gave a beauty to everything she did. I feel right comfortable here.

TRAVELER’S TIMES: Anna studied under the world famous Gutzon Borglum who did two wonderful sculptures of you that I know of. How do you feel about her teacher’s work?

MR. LINCOLN: Well, only Borglum was master enough to have created a work of art like Mt. Rushmore, and I am proud to have been a part of that. I am, however, particularly fond of the one he did of me that sits in front of the courthouse in Newark, New Jersey. I like the softened look he gave this old rail-splitter.

TRAVELER’S TIMES: Isn’t Mrs. Huntington famous for having statues all over the world?”

MR. LINCOLN: Yes, she is. Three come to mind right now — her Joan of Arc in Paris; Cid Campeador in Seville; and Jose Marti in New York City. I am proud to be included in her work.

TRAVELER’S TIMES: I understand you were — pardon the pun sir — pretty broken up by the time you arrived in Lincoln City. 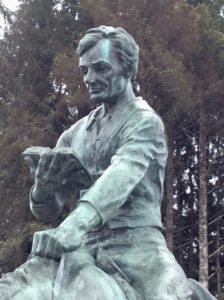 MR. LINCOLN: Yes, everyone had quite a time trying to get me patched up before the party. You see, when you are worth $600,000 and you arrive on a horse that has cracked hooves, a cracked nose and a snapped rein, it causes quite a stir. It took two full days to repair the damage.

TRAVELER’S TIMES: What did it take to move something like you?

MR. LINCOLN: Well it wasn’t easy I can tell you. I weigh 8,500 pounds you know and I’m 14-feet high. They built a special 2500 -pound crate, put me on a barge and transferred me to a special railroad car in New York City before I could start west. I had to be transported on tracks from I don’t know how many different railroad companies all across the country to keep from having to go through tunnels I was too big to fit through. In Salem, I was trucked the rest of the way to Lincoln City. We all know it would have been a tough trip for me to get here in 1849 but believe me, it wasn’t easy in 1965 either. Anyway, I made it and here I am. It’s amazing that I arrived in as good a shape as I did.

TRAVELER’S TIMES: Why did Mrs. Huntington decide on Lincoln City for you?

MR. LINCOLN: Well I don’t know for sure. There are three of me you know. One in Germany, one in Illinois and this one in Lincoln city. After she made the three, she broke the mold. I heard that she dedicated this statue to all students of all ages in the Old Oregon Territory. She was kind of enamored by the fact that I studied the way I did, devising my own “Saddle-bag College” and all and I think she just needed to do something with that.

TRAVELER’S TIMES: Well Mr. Lincoln, I appreciate you taking time out from your reading to talk with me.

MR. LINCOLN: That’s quite alright. I enjoyed the company. You see, most folks don’t even know I’m here. I see a few folks go by on a tour bus now and then but otherwise I just sit here in Kirtsis Park and wait for people like you to come by. The visitors are all different. Some have a great admiration for art and some for history. Some wonder just what I’m doing here reading a book on a horse. Some are surprised I don’t have a beard and others think my legs are too long or my body’s too short. A lot of people don’t realize what I looked like in my 30s and only knew me as the President. There are people who come from far away that make a special point to look me up and there are folks who live here in these 20-Miracle Miles that don’t know I’m anywhere around,

TRAVELER’S TIMES: Well thanks again Mr. Lincoln. I’ll be back. 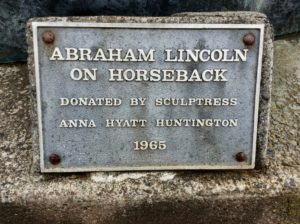 Anna Vaughn Hyatt Huntington (1876-1973) was an award-winning American sculptor, best known for her animal pieces and her large equestrian statues. Born in Cambridge, Mass. on March 10, 1876, she had planned to become a concert violinist but was encouraged by her sister to try sculpture. She studied briefly under H.E. Kitsen of Boston, and in the Art Students’ League in New York, and received valuable criticism from Gustav Borglum. Other artists with whom she studied include Hermon Atkins MacNeil, George Grey Barnard, Gertrude Vanderbilt Whitney, and Malvina Hoffman. As early as 1898 she began to exhibit her work and by 1906 had established a reputation as a fine sculptor of animals. She lived in Europe from 1906 to 1908 and again in 1910 when she won an honorable mention for her plaster model of Joan of Arc. She then returned to America where she executed many commissions, several of monumental size, such as the Joan of Arc which was placed along Riverside Drive in New York City. She continued to sculpt and produce fine pieces until illness forced her to stop in 1972, and she died shortly thereafter in 1973.

Location of Abraham Lincoln on Horseback is 2098-2116 NE 22nd St, in Lincoln City, OR. It sits one block of Highway 101 between Barnacle Bill’s Seafood and the Dairy Queen.

A Classroom filled with Sheep and Goats


One Pan Annie Interviews Her Kidney