Mural Mural on the Wall 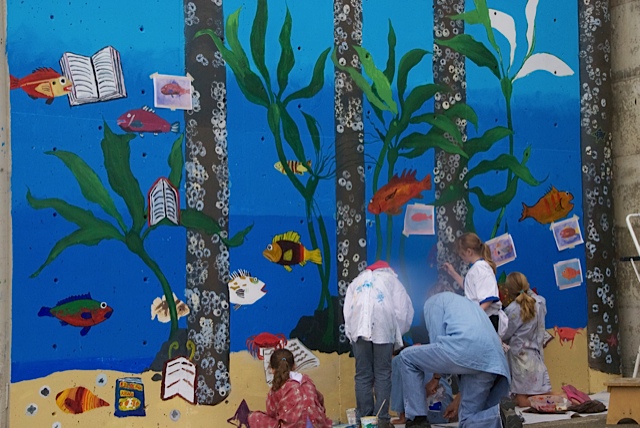 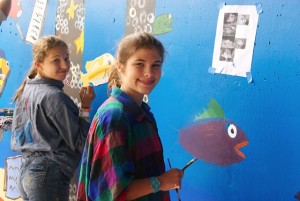 From left, Mairead and Clare Alexander paint on the mural while visiting from Greenbelt Maryland; Photo by Jan Jackson.

LINCOLN CITY, Ore. – When the Let There Be Arts folks get their thinking caps on, it usually means it’s a good time to pack up the family and head for Lincoln City. For many families, Lincoln City wins out over the other mid-coast towns because their children can participate in art opportunities hard to find anyplace else. A case in point was the chance to help paint a giant undersea mural on the external walls of the Driftwood Public Library. For Maryland residents Mairead and Clare Alexander, it was something to write home about.

Mairead, a newly graduated eighth- grader and Clare just out of the sixth-grade, arrived early for a mural painting briefing in the Driftwood Library parking lot. Both girls, who come from an art-loving background in their hometown of Greenbelt, eagerly put on their cover-up shirts and began listening to how to instruction from Krista Eddy, the artist who designed and prepared the wall for the undersea creature mural. By the time the children arrived, Krista had the students’ images drawn on the walls via an overhead projector, and all of the painting was done by the students themselves. 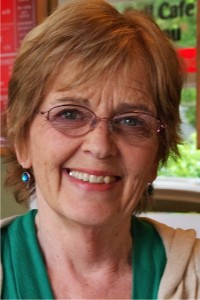 Since 2000, Let There Be Arts has partnered with Lincoln County School District to provide arts classes and artist in residency programs, support art clubs, sponsor concerts in the schools and provide materials or special guest artists for after school programs. The program began at Taft Elementary when that school received a small grant from the National Endowment for the Arts to provide after school arts for one year. The principal asked LTBA to implement and oversee the program. Local and regional artists and educators were hired to teach a variety of classes including music, movement, visual arts and drama. LTBA has continued to provide the after school arts program and has expanded it to other elementary and middle schools in Lincoln City.

Kaline Klaas, executive director since the program started, was herself an art and drama teacher for third-through twelfth-grade students. Klaas believes in the program.

“As art program after art program gets cut from the public school curriculum, we felt someone needed to step in and get these kids good art experiences to help further their education,” Klaas, said. “We call it Let There Be Arts because it is important to include all of the arts – like drama and dance and so on. For projects, such as murals, we teach art classes in the schools, select and copy student work and then project their work onto the mural surface. It is truly work created and painted by kids that you see in public places around the city.

“We have had good support from the city of Lincoln City and from private business as well,” Klaas said. “The Freed Gallery was the first to step up and do gala fundraisers for us and other groups have partnered with contributions like giving office space.

“The Driftwood Library mural was designed to accommodate about 350 children who now, like the Alexander girls, can come back anytime and see a piece of themselves still here in Lincoln City. Who knows, we may become the mural capital of the world.”

The Undersea Creature Mural at the Driftwood Library is on display 24/7, at 801 SW Highway 101, Lincoln City Oregon. For information on other Let There Be Arts projects in Lincoln City,  visit www.lettherebearts.com.


In the Shadow of the Moon