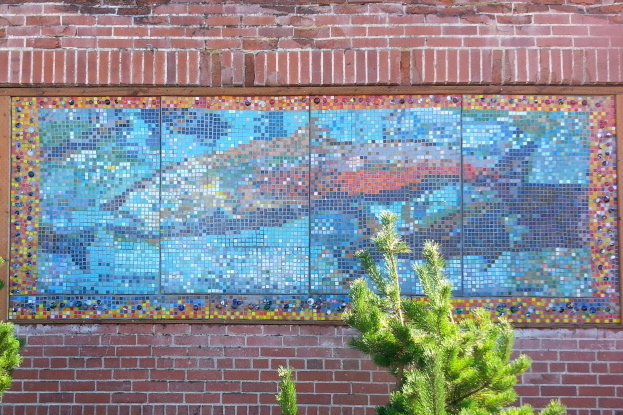 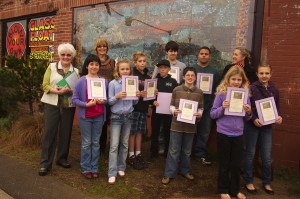 Children receiving accolades for being part of the Let There Be Arts Salmon Mural project; photo by Jan Jackson

LINCOLN CITY, Ore. – While the list of children leaving their mark on Lincoln City is long, the city’s Let There Be Arts program continues to come up with new exciting projects for them. The latest, inspired by Sandy Pfaff, executive director of the Lincoln City Convention and Visitors Bureau, was to do something that would help beautify the northern wall of the Jennifer Sears Glass Studio.

The project quickly became a collaboration between Let There Be Arts and the Lincoln City Public Arts Committee. In a one-week summer workshop held at Taft Elementary, mural artist Krista Eddy, and Let There Be Arts director Kaline Klaas, worked with 20 to 25 young kids ages 10 – 16, to lay the thousands of glass tiles needed to depict the five-by 12-foot image of salmon swimming in the nearby Pacific Ocean. The mural was publicly dedicated on October 25, 2013.

“We like to talk with the kids before we finalize a project and everyone agreed that salmon swimming in the ocean would be a perfect subject for this one,” Klaas said. 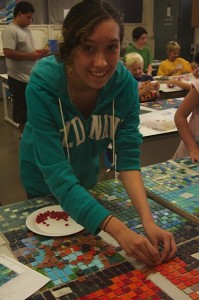 “After Krista created the image, and ordered the glass tiles, she pixelated the image into 12-inch by 12-inch grids for the children to use as patterns. In addition to the glass tiles, the border of the mural includes dozens of tempered glass baubles that get cut from the hot glass at the studio.

“We thought we could do it in four days but, some of the older kids came back on the fifth day and helped with the wonderfully messy job of mixing and spreading grout.”

The mural, which can be seen at 4810 SW Hwy 101 in Lincoln City, is the fourth public arts project created by Let There Be Arts kids. The three other projects include cedar salmon hanging on the retaining wall at Regatta Park, painted silk banners depicting beach and kite activities hanging high at the Lincoln City Community Center and the underwater mural painted on two walls under the Driftwood Public Library and city Hall building. More Lincoln City stories

For more information about Lincoln City’s Let There Be Arts program, visit www.lettherebearts.com.


Mural Mural on the Wall