Blowing With the Wind 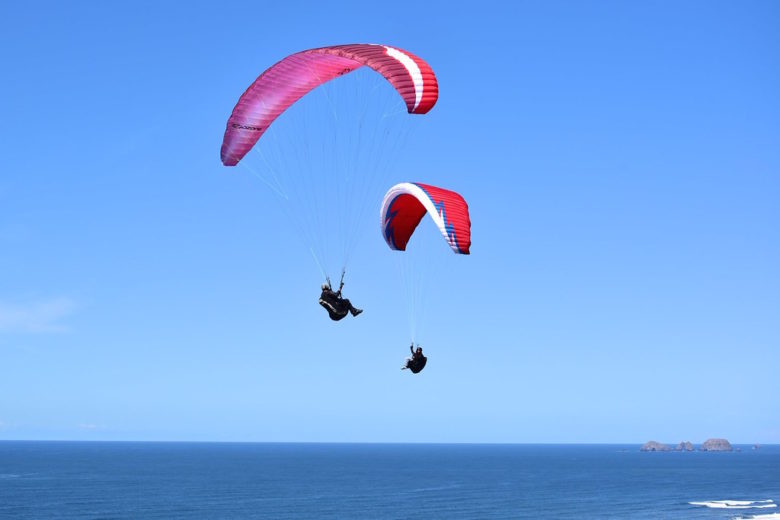 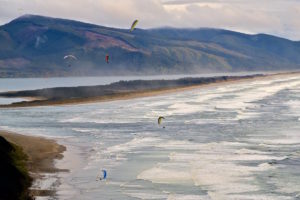 Doug Jackson flies through the air like a bird on a regular basis.

A member of the Cascade Paragliding Club in Oceanside, Oregon, Doug loves nothing more to grab his backpack full of paragliding gear and meet his buddies at a launching site.

“We launch into the wind, usually from a steep hill or mountaintop,” Doug said of his favorite sport. “It’s like having your own amusement ride.”

The sport of recreational paragliding as we know it today was born in France in 1978 and grew rapidly in the French and Swiss Alps during the mid 1980s. It reached various areas of the U.S. in the mid to late 1980s and most of the growth occurred during the 1990s. 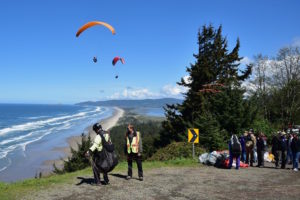 Paragliding should not be confused with parasailing that occurs above the water behind a boat or hang gliding that uses a rigid aluminum frame and looks much like a kite. A paraglider looks more like a parachute. It can fit in a large backpack, stored in a closet and  ready to go in a minutes notice.

“Hang gliders can fly in stronger winds where our sweet spot for flying is between five and 15 miles an hour,” Doug said about the difference in the two sports. “The harness you sit in has everything you need and though it may look complicated, once you figure out which lines bring the wings up to launch, which ones determine the way you steer and which ones make you stop, you are ready to go.  After a week or so of training you are in the air.

“I do recommend wearing helmets but for me dress is determined by the time of year and when and where I am sailing. If I’m paragliding at the beach in the summer I may be in shorts and sandals but I’m going to look a lot different if I’m lifting off a mountain in the snow. 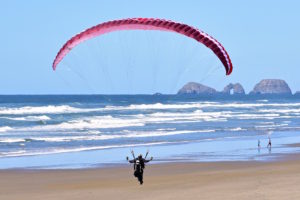 Paragliding participants include a wide range of men and women ages anywhere 11-years on up. Personality types include those who are conservative, competitive, like short flight, distance flying or dare devils who love acrobatics.

Doug, who entered the sport in 2006, says you don’t buy equipment until you’ve gone through training, but even so it’s not that expensive.

“You do a couple of days training before you do your low-level flight. You progress through the techniques and in a week or so you are in the air,” Doug said. “There is a lot of knowledge involved in working the lines which is why it is essential to get trained and not do it on your own. There is a certain level of apprehension at first, but it’s exciting.

“We like to have people come out and watch us but it’s good for them to bring a chair, some snacks and maybe a book in case we have to wait for the right wind. One of the fun places to see us is LongSword Vineyard near Jacksonville because you can sit and enjoy a glass of wine in the winery and watch the show.”

In the Shadow of the Moon