A story behind the Vanport Flood of 1948… 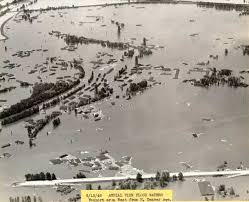 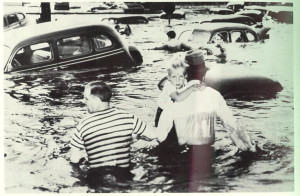 At 4:05 pm on May 30, 1948, a 200-foot (61m) section of dike collapsed that was protecting the 18,500 residents of Vanport City Oregon from the Columbia River. At the time, the city (built in1943 to house workers at the wartime Kaiser Shipyards) was home to World War II veterans and their families.

SALEM, Ore. – Gary Geerhart was only 11 years old when the flood destroyed Vanport City. Though he didn’t live there, he was on the railroad tracks that ran on top of the dike when it happened. It launched his volunteer career with the American Red Cross and he remembers it like it was yesterday.

“It was Memorial Day, 1948, and my friend and I were walking the railroad tracks on the way home from fishing for catfish in the Columbia Slough,” Geerhart said. “While we walked, we threw rocks at the insulators on the power poles. When the poles started falling over on themselves and water started rushing over the tracks, we thought we had caused it. We were so scared, we ran home and confessed to my dad.

“As it turned out, the power poles were falling because the flood waters were breaching the railroad tracks on the dike we were on. Still, as punishment for throwing rocks at the insulators, my dad got in touch with the American Red Cross and signed us up as volunteers to serve hot and cold drinks to the dike workers.”

Geerhart, born in Boise Idaho, had moved to Portland just a year before all of this happened. After was graduated from Benson High School, he moved to Seattle and volunteered by teaching Red Cross first aid classes. In 1963, he transferred to the nearby Vashon Island Missile Complex and served as a volunteer fireman helping families whose homes had burned down.

When he was transferred to Yakima in 1974, he volunteered for the Red Cross disaster service health and safety program and served on the board of directors for two years. He sought out the Red Cross Chapter when he moved to Squim, Washington. When he moved to Newport, Oregon in 1989, he was hired as that chapter’s executive director. In 2000, he moved to Monmouth and started volunteering for the Willamette Valley Chapter. He helped Lincoln, Marion and Polk counties during the tsunami alerts caused by the earthquake in Japan and before that it was the Aumsville tornado. 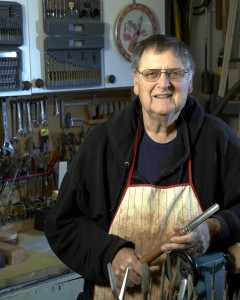 Of the many jobs Geerhart has performed during his 60-years, the opportunity to help people in situations they aren’t normally in and training people to prepare for disasters is his main attraction to Red Cross work.

“I was lucky that the Red Cross people always seemed to have stuff for me to do so that I felt I accomplished something,” Geerhart said. “I was a big kid so they never made me stuff envelopes. Some people are more interested in managing and supervising and others want to be workers. We have volunteer positions available for just about everybody.”

“The Willamette Valley Chapter serves We serves all of Marion and Polk counties by providing housing, food and clothing relief to families who are snow bound and lose heat and electricity, and setting up shelter for people in need. Though Geerhart’s volunteer hours can run from 15 to 40 hours a week, he still saves time for working in his home woodworking shop with his grandchildren.

“I slowed down fishing some time ago because there just got to be too many rules, but I have grandkids now so I’m starting up again,” Geerhart said. “I’ll also keep coming in to the Red Cross office. First I get my chocolates from the receptionist, next I go on back for the cup of coffee to go with it and then I get to work.”

For more information about the American Red Cross, visit http://www.redcross.org/

Morris and Arnie at the Gallon House Bridge . . .