Morris and Arnie at the Gallon House Bridge . . . 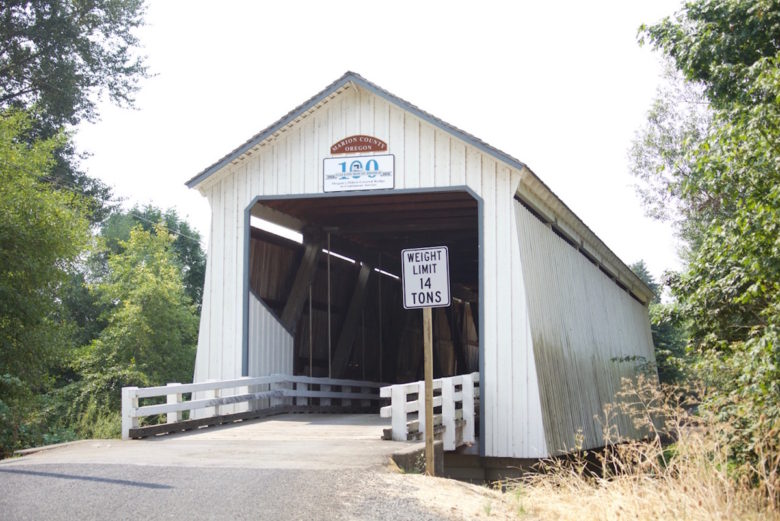 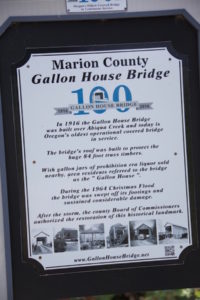 “Yeah,” I agreed easing up on the gas peddle so we could enjoy the field of sunflowers shouting at us in their harvest glory. “It’s just half a mile down this road.”

“No, the Gallon House Bridge,” I said gesturing at a stand of hops soon to be digested by big a gobbling machine.

“Why we going there? Thought we were headed for the monastery in Mount Angel.”

“That’ll come later . . . now look ‘round that corner there,” I said tossing my head forward.

“Oh!” Arnie spurted with an element of surprise. He lifted both hands and gestured toward the structure. “Didn’t know there were any covered bridges left anywhere in the world.” 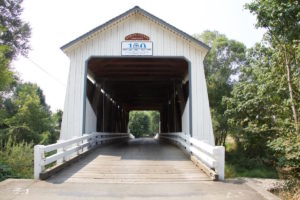 I laughed at Arnie’s intentional hyperbole. “This is the last functional one in Marion County . . . been rebuilt a bunch ‘o times. ”

“Why’s that?” Arnie said emerging from my Solara heading for the wooden ramp up the slight grade to the bridge.

“It’s all wood . . . You know, sun sucks the moisture out of the timbers . . . and dry rot . . . and a flood or two,” I said walking into the deep shade of the bridge’s interior. The opening at both ends of the bridge allowed enough light into the otherwise enclosed structure to appreciate the bridge’s construction and take photographs. 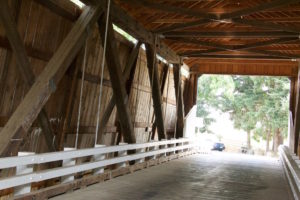 Pointing to the interior walls of one side I said, “The Howe Trusses you see interact with one another to support the weight of the bridge and, hopefully, what passes over it.”

Arnie stood for a half minute taking in the engineering feat. Unimpressed, he said “Yeah, well, okay.”

He walked out the opening at the other end of the bridge 84-feet away. He leaned over the creek-side barrier and scoffed, “Call that a river? Poor excuse for one, if you ask me.”

“It’s a creek… Abiqua Creek,” I said with the flair of a docent who knows the scoop. 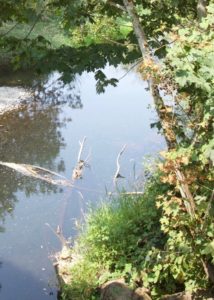 “So, what are we doing here looking at a size 92 shoe box and the pathetic trickle o’ water?”

“Well, you are looking at a bridge that is listed in the National Registry for Historic Places.”

“Yeah, sure…” Arnie scoffed, he laughed and added, “And so should my dog Blackie’s house and his raised-leg puddle.” He laughed again, “So what gives this bump in the road superstar rating?”

“Well, for one thing, there aren’t that many wooden covered bridges still in existence. This is Oregon’s oldest operational bridge in service.”

I laughed and pointed to the sign, “Take a look.”

“Well, I’ll be a dumfounded tourist,” Arnie snickered. “It says here that during the prohibition era residents bought and sold liquor in a house near here.”

“Yeah,” I drawled, “thirsty folk from ‘dry’ Silverton came here to buy white lightning from bootleggers from ‘wet’ Mt. Angel.” I paused to let my point sink in. “They sold it in gallon jars . . . so, voila! The bridge became known as the Gallon House Bridge. And curious people like us drive out of our way to take a look”

“Okay . . . so, we know how this colorful relic from the past got its name. But, riddle me this. Since you are so smart, how’d this tiny creek, that without fanfare ignominiously meanders its way through the open fields, get its name and what does it mean?” 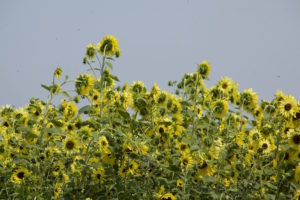 “Arnie, you are a scholar and a poet to want to know that,” I teased, then, added, “The fact is, no one knows.”

“Hey look at this,” I said, approaching a rough wooden table by the road.

I gathered six ears of corn. Arnie grabbed two tomatoes. I slipped three dollars in the narrow slit of a sizable galvanized pipe.

Arnie was already in the car. I took a last look at the vintage bridge, satisfied that I’d once more sniffed an interesting piece of Oregon history.

I climbed behind the wheel. We rolled away headed for the monastery . . .in Mt. Angel. . . the once wet city.

For more about Morris R. Pike, see About Us.

In the Woods with FNRL