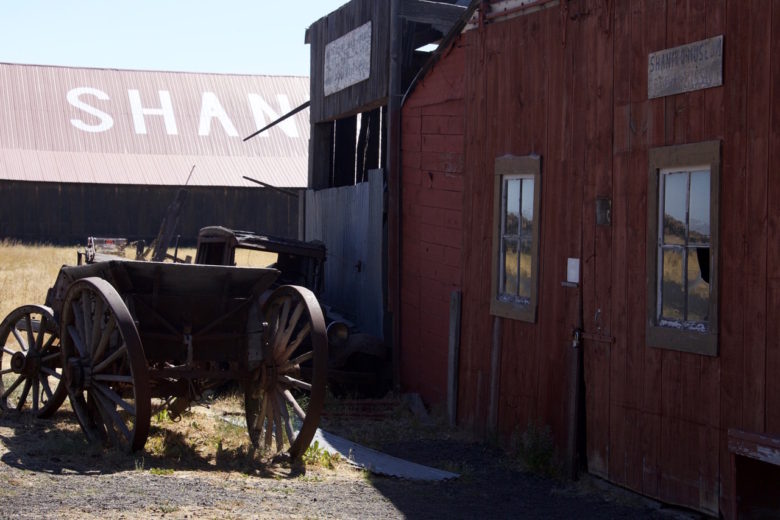 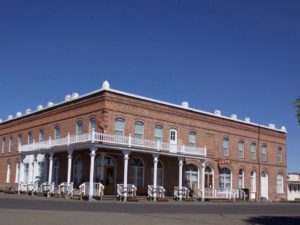 The wide street was deserted. The desert sun parched everything in sight . . . didn’t matter for most things. Rickety wagons, yards filled with rusty harrows, plows and other retired farm machinery spoke of the days long gone when they helped ranchers ready the sheep they sent to market.

The wool warehouse at the end of Main Street still advertised the days when the railroad sliced across Oregon’s central desert moving hundreds of thousands of sheep to markets in the east. Alas, that is until a more efficient railhead relocated elsewhere and trains quit coming to the town. The shipping of sheep went with the railroad and when that was gone, Shaniko dried up. Just like that. 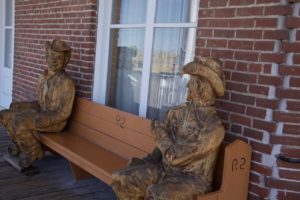 Arnie, my alter ego, walked in the center of the street opposite the old Shaniko Hotel, which until it went dark, offered the occasional travelers an authentic taste of the Old West. While guarding one door, a pair of “desperados” carved out of wood sat outside jawing hearsay and telling jokes.

“What on earth are you doing?” I asked Arnie who was striking the pose of a bowlegged gunfighter. 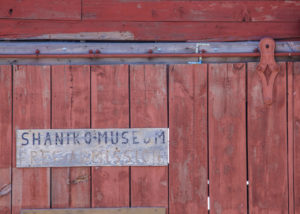 “Outlaw coming this way,” he drawled gesturing toward a woman emerging from one of the shops opposite the hotel.

Of course, the woman didn’t respond to Arnie . . . instead she approached me. “Want to see something special?” she asked with a sweet smile.

“Sure,” I said not knowing what to expect.

The woman took steps toward one of the shed-like buildings. 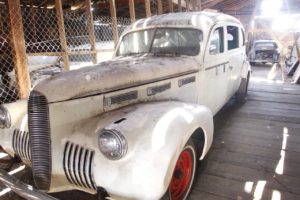 Arnie hitched up his trousers and followed mumbling, “Miss Kitty, I suppose.”

Miss Kitty slid the door open and there, filling the center lane of derelict automobiles, stood an old dust covered white car. Across the front above the windshield were the letters, “… ice.” Couldn’t make out “Pol,” but am certain, that’s what it said.

“This baby would move in her day,” I admired. 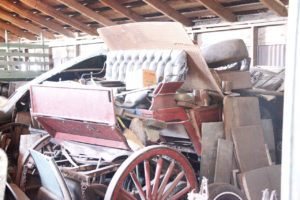 “Yeah,” Arnie said, imagining himself storming across the desert chasing sheep rustlers with a Tommy Gun blazing in each hand.

The nice lady explained that her deceased husband had collected the old cars and brought them to Shaniko to preserve them in the dry climate. He died and she was left with a barn full of his dream.

Restoring the collection would cost a fortune but it would be worth much more. I asked her what she was going to do with them.

“Keep ‘em,” she said bluntly. “Let people see ‘em.” She turned and calling over her shoulder as she left the museum, “Stay as long as you like. When you’re done, I’ll show you what’s in that house,” she said pointing across a field. “I use to live there.” With that she disappeared.

Behind the police car and on each side behind wire fence were 20 or so other vehicles in varying degrees of disrepair.

“Wonder if Jay Leno knows about this place?” Arnie said admiring the front end of a Cadillac.

A bit frustrated that we couldn’t get a really good look at all them hidden behind parts of who knows what, we left the museum and headed for the house. 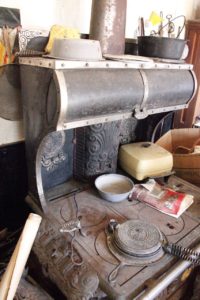 Miss Kitty led us into the kitchen of the wooden structure. In it was a cast iron wood burning stove and old cooking utensils . . . a bonanza for antique lovers and other souls who want to live in the past. Other rooms also were filled with whatnots from a bygone era. Miss Kitty pointed to a peddle-powered Singer Sewing machine. “Used to sew on that,” she said with a tone of pride and nostalgia. No more . . . arthritis and eyes.”

“Don’t know anything about that.”

“How about a phone?” Arnie whispered as we returned to the kitchen.

“Surely you have a phone?” I insisted voicing Arnie’s concern.

Miss Kitty laughed, “Wouldn’t know how to operate one of those fangle-dangle things.” She walked out the door and headed for a chapel 40-feet or so from her house. 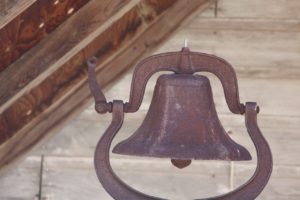 “Use to do lots of weddings in here . . . not so much anymore,” she said pulling the rope of a bell. It called out in crystal tones, ‘Come in, come in.’ “Stay as long as you like,” she said and over her shoulder called, “Got a mess o’ beans cooking.”

Arnie and I left the chapel and walked passed the hotel to our car.

“Bet Miss Kitty used to hang out at this Longbranch,” Arnie laughed.

“Yeah,” I said halfheartedly. “More like the Lonebranch now. That must be lonely.”

“Nah,” Arnie scolded. “This town is crowded with phantoms from yesteryear. You 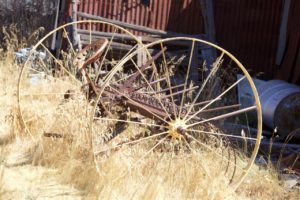 The late afternoon sun was hanging low at the end of Main Street. A gentle wisp of dust rose behind our vehicle as we rolled out of town. It looked . . . almost . . . like a ghost.


In the Woods with FNRL