Shipwreck Where the Columbia Meets the Ocean 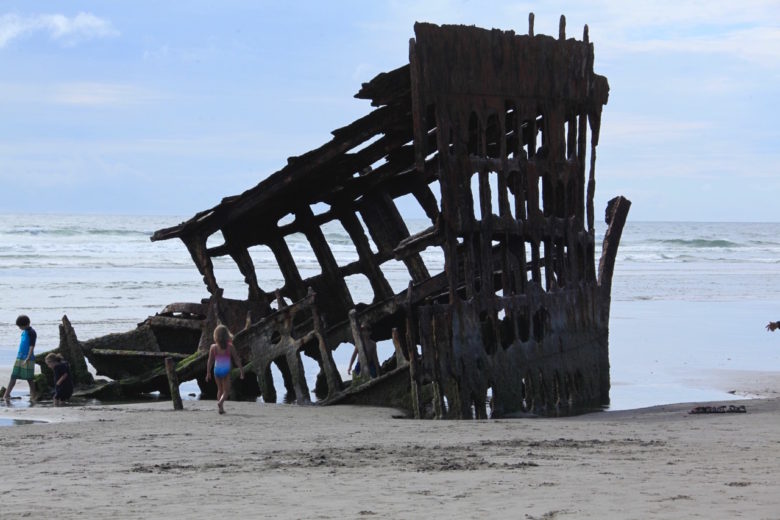 Shipwrecks. Who wouldn’t be interested in having a look at one . . . especially when it’s so easy to get to?

I parked in Fort Steven’s parking lot near the site, grabbed my trusty camera, bounced over the berm and into the loose sand headed for the wreckage.

Momentarily, I was cut short, almost breathless, by the sight of the ship. There she was, the Peter Iredale, gripped snug in sand at the water’s edge. Her thick coat of scaly rust told me that she had been there for a long time. . .  well, 110 years, according the nearby tourist information sign. I trudged closer to the wreckage . . . Her upper torso was etched against the cloudless sky. She stood there motionless like a stanch sentinel on duty . . . forever.

“How could they have let it happen?” I thought, approaching the rusting icon.

I was glad there was no one to answer. I wanted to enjoy exploring the wreckage alone, taking arty shots, and letting my imagination recreate the scene of the ship’s demise.

I got closer, avoiding the puddle of ocean water at the base of a fragment. I raised my camera and began shooting. “A dozen different angles of the rusty skeletal remains will be enough,” I thought . . . “well, almost enough . . .”

“How could they have allowed this to happen?” I repeated as if asking the stalwart bow beam rising above graveyard?

Words from the captain

I was surprised when a voice came in the wind . . . or was it the bow beam talking? “Captain Lawrence did his best to save me from the ravages of the storm,” the voice said, “ . . . The court let him off . . . even praised him for his effort to save me.”

“The ship knows,” I thought, then, protested out loud, “Experienced sea captain would have known . . . Crossing the bar into the Columbia River . . . It’s one of the most dangerous crossings in the world . . . and in a storm, . . . Even then, he should have been ready.”

“Not as easy as you think,” I heard the fragment explain. “An iron clad, four mast ship isn’t as nimble as those skinny schooners you see skimming across the surface like water skippers.”

“Stowaways?” I asked, moving to get another close up shot of bow.

“Couple of lads from Bristol, wanting a spell of adventure, hid in one of my life boats,” the bow beam grunted and laughed. . . The captain was livid… extra mouths to fee. . .  but when he saw how hard the lads worked to earn passage, he let up.”

“Being on the Iredale in that storm had to be a frightening adventure,” I said imagining the scene.

“More than an adventure!” the beam said, “The crew were all asleep except for the lookout . . . In the dark of the early morning of October 25, 1906 the sailor spotted the Tillamook lighthouse. . .  ‘We are headed for trouble,’ the sailor shouted. Captain Lawrence was on deck. ‘Set course for east northeast!’ He commanded. A detail scampered to the rudder. . .  others to the sheets.”

“But that was not enough . . .” a piece of rib shouted, as if in the furor of a storm. “‘Northeast!’ came the captain’s command! The helmsman responded attempting to wear the ship away from the shore . . . But by then the winds had gathered their full furry and a rising tide was pushing us toward the Clatsop Spit. A final ambush from a heavy northwest squall drove us into a sand bar grounding us.”

“The crew. . .  what happened to the crew?” I asked caught in the terror of what the sailors must have felt and what may have happened.

“Oh, it was scary enough for a while…” the beam explained, “but life boats from nearby Hammond assisted in evacuating the my crew . . . took them to Ft. Stevens,” the beam hesitated a thoughtful moment, then continued, ”I was the only fatality in the wake of that storm. I sat stuck in the shifting sand for several weeks awaiting attempts to dislodge and get me back to the deeper waters off shore. But merciless winds and high seas dictated otherwise . . . ” The beam paused again tamping down an emotional recall of the painful event. “Finally, I couldn’t help it . . . The power of the surging waves on a rising tide and strong, relentless winds blowing against my side was too much,” the beam paused again as if swallowing hard. “Finally, I listed to port and it was over,” the beam paused again, then continued, “Attempts made to right me and to get me back to sea . . . were futile.”

The beam paused again collecting fragments of memory and in a dejected voice added, “All hopes of getting me up the Columbia to Portland were abandoned. Much of my cargo was unloaded… and in the coming months salvage crews took as much of the iron as possible from my hull.” The beam chuckled, “That’s one reason I look so embarrassingly naked.”

“That was over 100 years ago,” I said attempting to encourage the fragment.

In an attempt to divert the shipwreck’s painful moment I observed, “Wonder if the Bristol stowaways made it to Portland.” The beam didn’t answer.

For a long moment the only sounds present came from gentle waves lapping at the foot of the rusting monument and  distant laughter.

“Well, at least the Bristol boys had their adventure.”

The beam ignored my comment with his own, “Not seen them or any of the crew since that day . . . But we’ve seen thousands of lookers and frolickers like those young ones coming yonder . . . You watch… they give us life.”

I didn’t stay to watch. I knew the young ones would have their fun . . . And my shipwreck moments were complete.

For more information on the Peter Iredale