Oregon’s Only Frank Lloyd Wright House Open to the Public 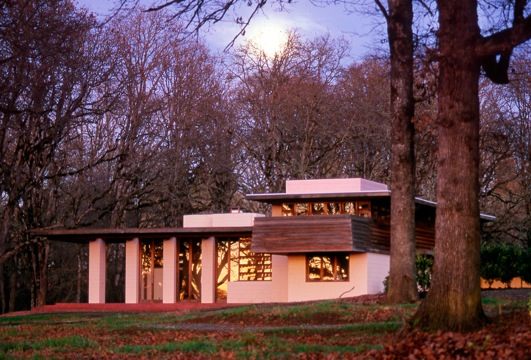 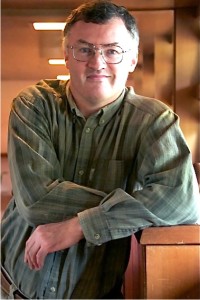 Eric Silberg, docent at The Gordon House since it opened to the public in 2002; photo by Jan Jackson

SILVERTON, Ore. – Little did Conrad and Evelyn Gordon know that when they commissioned Frank Lloyd Wright to design a house for their Wilsonville farm, that it would end up making a wonderful contribution to the art world. Commissioned by the Gordons in 1956 and designed by Wright before he died in 1959, the house was completed in 1964 under the guidance of Taliesin Associated Architects, Wright’s architectural firm.

The house was taken apart and moved to the The Oregon Garden in Silverton Oregon in 2001, and was reassembled and opened to the public in March 2002.  One of only 60 of its kind, the custom designedGordon House is the only Frank Lloyd Wright house open to the public in the Pacific Northwest.

Eric Silberg, a volunteer docent since the house opened, has developed a passion it.

“I’m sure onlookers were surprised to see the house perched on the back of a flatbed truck, moving four miles an hour along the 40 miles of back roads between Willsonville and Silverton,” Silberg said. “It had to be cut into moveable sections, the pieces marked, numbered and categorized and then reconstructed like a giant jigsaw puzzle. It was built to sit along the Willamette River on the Gordon farm, but after Mrs. Gordon died and the property was sold, it was relocated to Silverton in the grove of oaks.”

Silberg, who was born in Boston and went to high school in Billings, Montana, came to Oregon and entered Linfield College on a baseball scholarship. Armed with a degree in accounting, he was working at The Oregon Garden when the Gordon House arrived.

“My first encounter with a Frank Lloyd Wright house was a visit to Fallingwater, in Mill Run Pennsylvania,” Silberg said. “My mother and I were touring historic battle sites in the Virginia and Washington DC area and ended up close enough we decided to continue on and have a look. I was inspired and when they needed docents when the Gordon House was opening, I volunteered.

“Frank Lloyd Wright had such a long career and was such an interesting man, that the big problem is limiting the information to the 40-minute tour time frame. We just do the best we can.  Some who visit the house already are Frank Lloyd Wright fans and some are new to him. Visitors come from all over the world though most are from the Pacific Northwest. We also get architecture students from the University of Oregon, motorcoach and travel group tours and the house is available to rent for small private celebrations and corporate and association group meetings. I volunteer at least a couple of times a month or whenever they need me.”

Though hated by some and celebrated by others, Frank Lloyd Wright (1867 – 1959) was a genius ahead of his time both in his professional and personal life.  An American architect, interior designer, writer and educator, he was a leader in promoting an organic architectural concept that not only used local materials but also incorporated his designs into the landscape. Refusing to build houses with rooms that were boxes beside boxes within boxes, he designed and built houses as a unified whole that appeared to grow naturally from the earth. The Gordon House is one of his Usonian houses (an abbreviation of the United States of North America), which he designed to make affordable to the common American family. They had no attics, no basements, and minimalist ornamentation and were built with carports (Wright’s own term) instead of garages.

“Whether it is the Guggenheim Museum in New York City, Taliesin West near Phoenix Arizona or any of the 60 Usonian houses, Wright’s buildings are as unique as the man was himself,” Silberg said.  “To walk into the Frank Lloyd Wright Gordon House is an experience apart from walking into any other structure. It is a work of art and you feel that the minute you step inside.”