The Story Behind Multnomah Falls Lodge 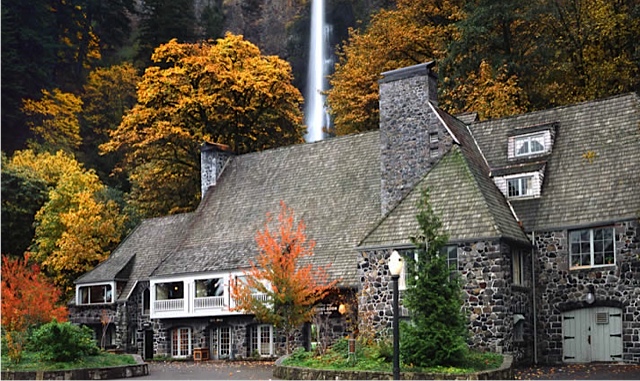 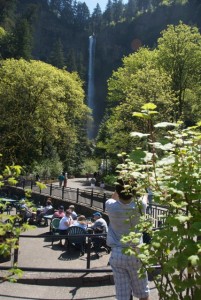 Multnomah Falls mid-week in May; photo by Jan Jackson

You only have to drive I-84 between Portland and Hood River to see that Multnomah Falls Lodge is indeed one of Oregon’s most visited attractions. Located but a hefty stone’s throw from the Columbia River, it’s a jaw-dropping place.

When Meriwether Lewis camped nearby it on his way to Astoria (1805-1806 Lewis and Clark Expedition), he described  “Streams falling from great heights becoming perfect mist collecting on the rocks below.”

Today, the streams are still falling from great heights but groomed trails, footbridges and coffee kiosks have been added. You can buy a good variety of local, areawide books and many locally produced items in the sophisticated gift shop and the US Forest Service has an information desk to help you take part in everything Oregon has to offer. I personally love eating in the lodge dining rooms sometimes in front of a nice warm fire in the big stone fireplace and other times while watching the falls from the sunlit atrium-style dining room they built around the old patio.

After years of wondering why they call it a lodge when you can’t stay there, I decided to ask concession owner/operator Rick Buck.

“In the beginning, you could stay overnight,” Rick said. “It was a seasonal place where visitors could have something to eat, hikers who didn’t mind the cramped quarters could rent one of the five small rooms and employees could live on the top floor. In 1952 however, they turned the guest rooms into staff offices and the dormitory floor into storage space.”

Open in the summer and shuttered entirely during World War II when gas was rationed, the property became a year-round destination in 1977 when they hired Harold Buck.

“Harold Buck, was my dad,” Rick said. “He had been in sales and hospitality at Crater Lake National Park prior to coming here. He was an innovative person with great leadership skills and when they gave him the go-ahead to take it from seasonal to year-round, he did just that. Some days there were only one or two people here but he kept it open. Dad, who was 93 when he passed in 2013, was always the figurehead. Famous for  putting in his two-cents worth, he was great to work with.”

History of the Site

In 1915, to preserve this beautiful spot, the famed lumber baron and philanthropist Simon Benson dedicated the land to the state. A short time later, the Washington Railroad and Navigation Company (forerunner of the Union Pacific Railroad) donated the property to the City of Portland to build the Lodge. Multnomah Falls Lodge was completed in 1925.

In 1939, the City of Portland transferred the operation to the US Forest Service, which now contracts with Multnomah Falls Company to host more than two million visitors each year.

There used to be a railway station and ticket office here and in the summer. Folks from Portland could ride out on benches placed on flatbed railway cars, spend the day and take the same train back. Today, it is still Portland’s playground even though the train service is long gone and visitors come in cars,motorhomes, buses and on bikes.

“My job is to carry on the tradition that started when the lodge was built,” Rick said.  “My daughter Jill is managing the company now and we are constantly upgrading – building more bike racks, stocking our gift shop with as many locally produced items as possible. It is a wonderful place. I used to go to work and pinch myself to make sure I was really privileged enough to be able to work here. It’s still challenging and fun and I try never to take it for granted.”

The Columbia River Gorge National Scenic Area follows the course of the Columbia River as it cuts through the Cascade Range. The boundary line between Oregon and Washington, the gorge is known for its spectacular views and numerous waterfalls, including Multnomah Falls the tallest waterfall in the state.