The Story Behind the Jennifer L. Sears Glass Art Studio 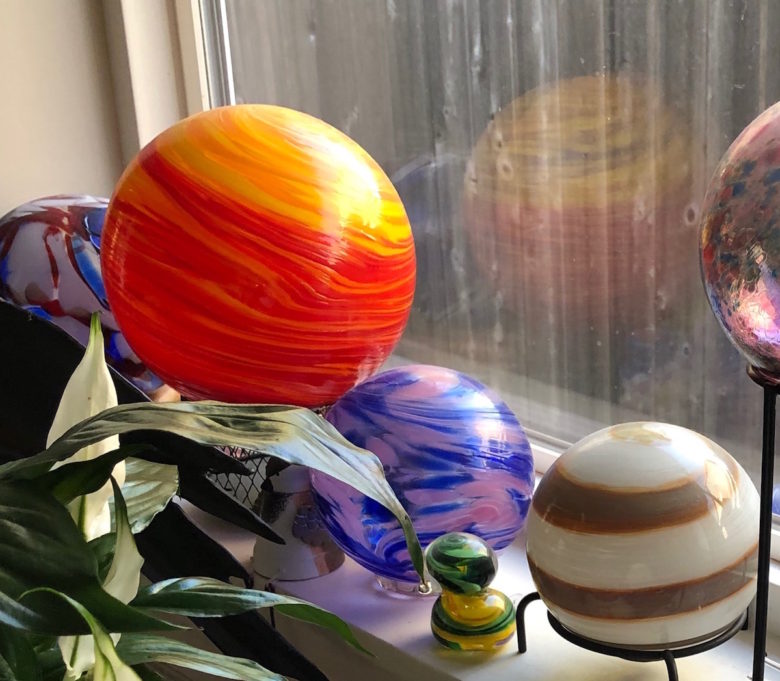 LINCOLN CITY, Ore. – It was October 1979 when Jennifer Sears got the idea that became the Jennifer Sears Glass Art Studio that for more than six years has been helping to fuel the tourism economy in Lincoln City. The idea to make glass blowing available to the average person took 26 years from the day she walked the wooded path to watch a glass blower near historic Jamestown, Virginia to the February 2005 opening of the glass blowing studio that bears her name. Jennifer died in March 2005 of cancer of the brain stem . .  but she lived long enough to see her dream become a reality.

The Jennifer L. Sears Glass Art Studio offers free glassblowing demonstrations to the public, and for a fee, teaches anyone who wishes how to blow their own glass float or paperweight. Their art objects are ready for them to take home at noon the following day. It didn’t take long for the word to spread. 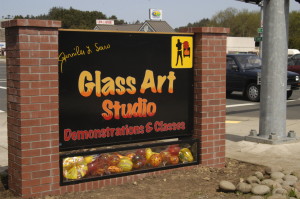 “Because Jennifer’s venture was such a new idea, I was afraid no one would come when we opened,” said studio artist and manager Kelly Howard. “But by the second week, people started coming in saying that their friend had blown a glass float here and they wanted to do it too. Now we have people coming to Lincoln City from all over the United States for the sole purpose of being abled to blow their own glass. In the summer months we are so busy they have to take a number.”

Putting the studio together involved the whole of Lincoln City. It meant selecting and remodeling a suitable site, shopping for, buying and installing the state-of-the-art equipment and interviewing and hiring artists who could manage and teach glass blowing.

The studio, located in the historic Liftin Motors building at 4821 SW Highway 101, was chosen not only for its location but for its two large overhead doors on the north end of the building that make a perfect place for overflow visitors to view the glass blowing operation. The south end now holds a gallery that showcases local artists’ work and includes a small area dedicated to visitor information. 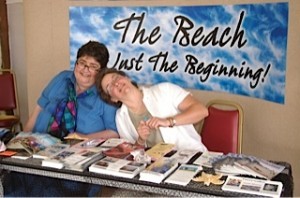 Jennifer Sears (1956-2005) left, with then Lincoln City Mayor Lori Hollingsworth during a promotional party held May 2004, at the Glass Art Studio; photo by Jan Jackson

Jennifer, a native Oregonian whose family was involved in the tourism industry, joined the U.S. Army as a journalist photographer hoping for an opportunity to travel. After four years stuck at Fort Sill Oklahoma, she came home, completed college and went to work traveling the world as an escort for Jan Jackson Travel.

Jennifer worked seven years in motorcoach tour operations, spent 10 years in National Group Sales for the corporate office of Shilo Inns and for three years was on the staff of Washington County Visitors and Convention Bureau. She became executive director of the Lincoln City Visitor and Convention Bureau in 2000.

Jennifer never doubted the positive effect the studio would have on tourism in Lincoln City. She would not have been at all surprised that 20,000 people came through the door the first year of operation or by the nearly 100,000 a year that come now. She would not even have raised an eyebrow over the statistics that show 40% of the people say that it was the Glass Studio that brought them to Lincoln City and 25% stayed more nights than expected.

As the number of visitors who come to Lincoln City for the sole purpose of blowing their own glass float continue to rise and major publications like the Wall Street Journal continue to give it free editorial press (more than a quarter million dollars in the first three months of 2011), tourists looking for the glass blowing experience keep pouring in. You can see it start to finish on You Tube.

Lincoln City can be proud of having an attraction that makes it a town like no other.

Find out more at: www.jennifersearsglassart.com