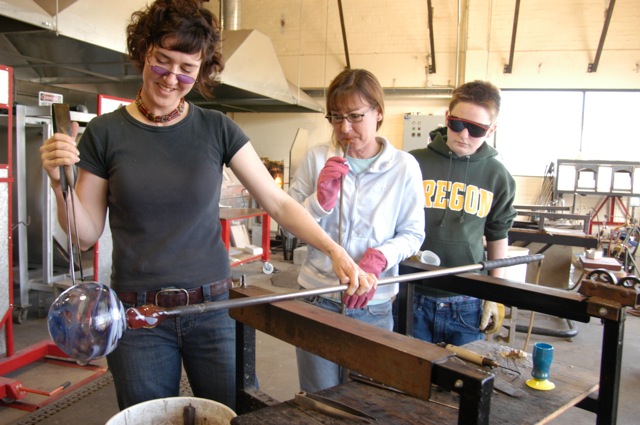 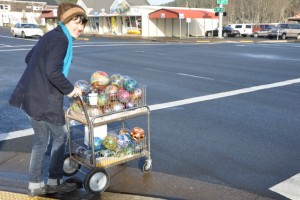 Glass artist Kelly Howard moves her precious cargo from her workshop across the street to sell in Volta Glass Gallery; photo Jan Jackson

LINCOLN CITY, Ore. – When you buy and blow your own glass float, paperweight or starfish at the Jennifer L. Sears Glass Art Studio in Lincoln City, the chances are good that you will encounter glass artist Kelly Howard. Kelly and her team of artists in residence are there five days a week in the winter and seven in the summer giving one-on-one help to any child or adult who wants to make and take home their own one-of-a-kind blown glass creation. Since it officially opened in February 2005, the first visitor-centered, hands-on studio of its kind has seen more than 250,000 men, women and children come through the door.
The first of its kind
“Because Jennifer’s venture was such a new idea, when we opened I was afraid no one would come,” Kelly said. “But, by the second week, people started coming in and saying that their friend had blown a glass float here and they wanted to do it too. Now we have people coming to Lincoln City from all over the United States for the sole purpose of being able to blow their own glass. In the summer months, we are so busy they have to take a number.” 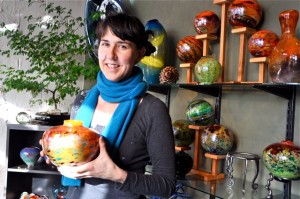 Kelly, who was born and raised an hour west of Chicago, grew up painting and drawing and made many projects in her father’s industrial design workshop on weekends. In 1990, she enrolled and spent a year at the School of the Art Institute of Chicago. She transferred to the University of Wisconsin at Madison and earned a Bachelors of Art degree in psychology in 1994. While at the U of W, she spent a semester traveling to Italy and Venice, and after graduation she accepted a presidential merit scholarship to SAIC to study painting, drawing, fiber arts and bronze casting.

The turning point to her future as a glass artist however, came the summer she enrolled in her first glass-blowing class.

“From the first time I tried it, I knew it was for me,” Kelly said. “After that, I couldn’t get enough of it. After I got my BFA, I took a job at the school as Assistant Director of Admissions and used all of my vacation time to take more glass classes. But, working full time in the office and interviewing students for admissions, I didn’t have enough time left over for glass blowing. In 2000, I met some folks who were opening a studio in Vancouver Washington and when they offered me a job managing their studio, I moved to Portland. Part of my pay was getting to blow glass. It was while I was working for them that I ended up in the glass scene in Lincoln City.” 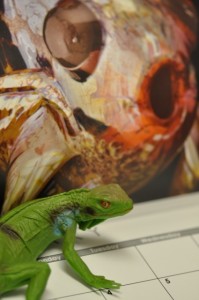 Kelly, who contracts with the City of Lincoln City to teach glass blowing to locals and visitors, makes about 16 to 20 pieces a day to sell in her gallery located across the street from the glass studio. In the winter when the studio is open Wednesdays through Sundays, she works Mondays and Tuesdays creating her signature glass art. During the hectic summer months, she does her work in the early morning before the studio opens to the public.

World wide acclaim
Earning a reputation for her beautiful use of color and form, Kelly is now enjoying widespread attention for her art. This past summer a glass collecting German couple who had also visited the famous Murano glassmakers in Venice, included Lincoln City in their travel itinerary so they could add a few pieces of Kelly’s glass to their collection.

“It has been fun to visit with folks from all over the world, but it’s also fun to see the locals come in,” Kelly said. “Whether its shoppers in the gallery or individual folks or groups for tours, corporate team-building and other special occasion tours in the studio, we’re open for business.”

For more information about Kelly Howard glass art and Volta Glass Gallery, visit 4830 SE Highway 101, Lincoln City, go online to http://www.kellyhowardglass.com or call 541-996-7600. To watch Kelly do it, watch this You Tube

The Hidden gems in the Opal Creek Wilderness . . .