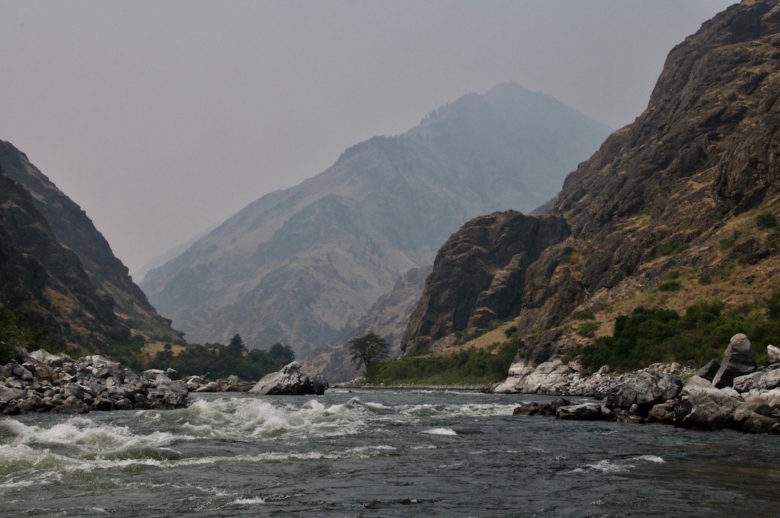 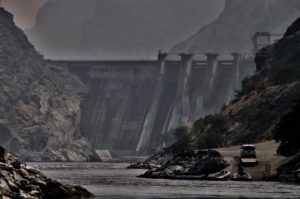 One hot August morning Arnie and I found ourselves slaloming down the Snake River in a 42-foot long jet boat. Well, “found ourselves” isn’t quite right. We’d reserved our spots several months before. Now here we were speeding headlong into what we knew would be an exciting adventure. We would get to experienc wonderful things in North America’s deepest canyon.

We were in the largest jet boat in the wild river section that starts just below Hells Canyon Dam. The water, coursing down the rocky channel provided bouncy buoyancy for our craft. Being on the river was a pleasant relief from the heat we’d experienced at the launch site. 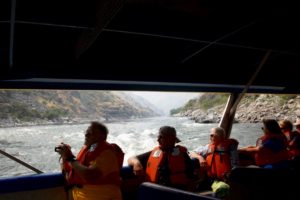 I gave Arnie a look of “whatever.” A Puritan looking woman seated in the center row smiled.

A nerdy looking man seated on the other side of the boat offered, “It’s about right. The average high temperature in the Canyon for August is 95 degrees Fahrenheit.”

“Gotta be near that now,” I returned.

“And more,” Arnie mumbled removing the light jacket he’d worn thinking it might at least have been cool in the early morning.

“Probably don’t have to worry,” the nerd said. “Good chance we’ll all get wet when the pilot negotiates the category four rapid coming up. That will cool you off.”

An alarm signal went off in my brain . . . It might be okay for our body to get

soaked . . . but not my five thousand dollars worth of camera equipment. 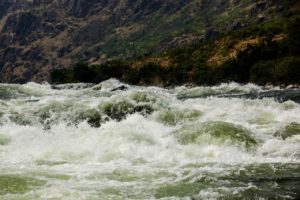 The pilot picked up on my panic. “Yeah, before we hit the four, you might want to put your camera under one of the center seats,” he said pointing. “The compartment is almost waterproof. I’ll give you a head’s-up!”

Relieved, I laughed and said that a bit of dampness would feel good in this heat.

The Puritan smiled and nodded.

“Where’d all that haze come from?” Arnie asked, indicating the smoke hovering over us and filling the canyon.

I didn’t know, but the nerd did.

“A dozen forest fires and a couple of prairie ignites are raging several places in Oregon . . . not particularly pretty,” he opined.

“Well, it really doesn’t detract from the incredible beauty, and I’m happy to say, it filters the sun’s harsh rays,” I said. “ . . . makes it almost like sweet light in the middle of the day.”

“That’s not right here though,” the young deckhand contradicted, pointing in a southeasterly direction. “That’d be near Devil Mountain. It’s in Idaho.”

I marveled that the teenager would challenge the nerd.

“North America’s deepest river gorge,” the nerd said ignoring the young man. “In this stretch of the river it averages 7,993 feet.”

“Wow, that’s more’n a mile,” Arnie marveled. “I would have thought the Grand Canyon was the deepest.”

“Yeah, everybody does,” the nerd said putting the topic to rest. After a pause, he added, “the Grand may have all those colorful layers of rock . . . but for shear size, Hells has her beat to hell and gone.” 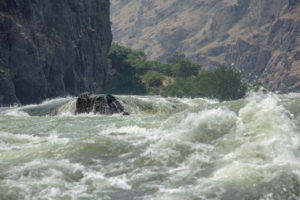 We skipped happily over smooth sections of the river and slid easily over several rippling rapids. The pilot skillfully avoided the dozens of crests in the water caused by huge boulders resting on the riverbed.

“Glad the pilot knows his stuff,” I muttered to myself studying the towering cliffs on both sides of the canyon.

“You think anyone was around when that boulder broke lose?” I asked, pointing to a locomotive sized rock to our left.

The pilot laughed, “Don’t have to worry,” he said. “In all the years we been doing this . . . never seen even a pebble drop.” 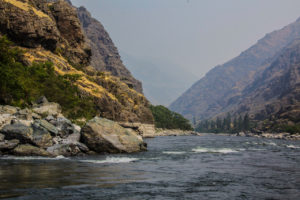 The nerd singled me out and said, “Happily cruising down this marvelous canyon, surrounded by incredible beauty and you get caught up on the rare chance that we might get hit by a marble? Relax!”

I felt chastised. I looked at other passengers for a tinge of support. No one else seemed concerned.

“Category four coming up,” the pilot warned. “ Now’s the time to think about protecting your cameras.”

Several of us quickly stashed our gear in the center compartment.“

“What about us?” Arnie asked returning to his seat. “If the waves are that big, what’s to keep’em from washing us overboard?”

The nerd and the young deckhand laughed. The Puritan turned pale.

Suddenly the boat slid abruptly to the left, then, almost immediately feinted right… then left again. Arnie and I grabbed the rail behind us and held on. The Puritan clutched her man’s arm. The nerd tensed up but managed to cover his unease. The deckhand raised both hands in the air challenging the river to do its worst.

Ohs and ahs mingled with laughter and cheers filled the air.

Just as I turned my head to monitor our progress through the four, a wall of water hit me. Many of us were completely doused.

I turned to look at Arnie. He was spitting out a mouth full of water. His eyes betrayed a bit of shock.

The boat took a last dodge left and, then settled again into its smooth routine on a relatively glassy section of the river.

For a few moments bursts of laughter and lighthearted banter filled the air. Obviously, everyone was relieved that they had made it though their first Mt. Everest-sized encounter. 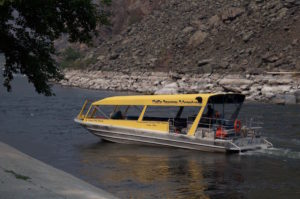 For a moment I was lost in replaying what we had just happened. I retrieved my camera from the chamber, raised it and once more began to record our exciting adventure. The nerd was right, no need to worry . . . every reason to wonder and enjoy. The deck hand was right about the captain knowing his stuff.

My wet clothes felt good . . . like the canyon was suddenly air-conditioned.

More information about riding the rapids through Hells Canyon at www.hellscanyonadventures,com