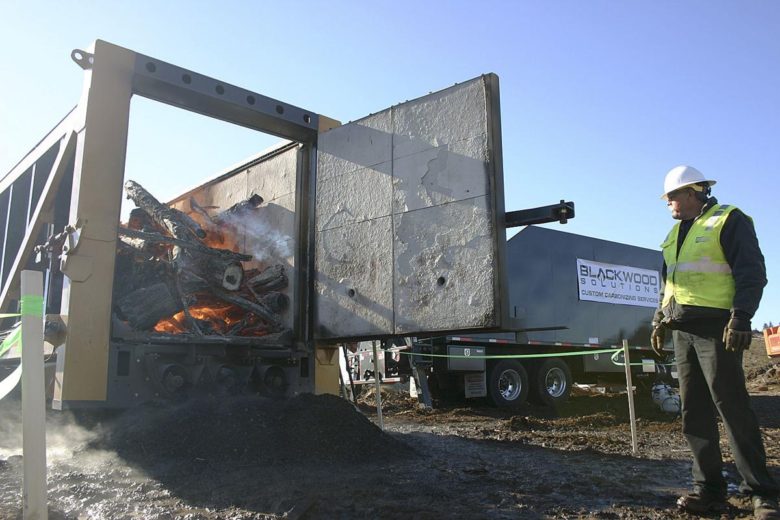 LEBANON, Ore. — A blast of intense heat escapes the Carbonator 500 as Anders

Normally, loggers burn this type of unprofitable forest waste in large slash piles, but the

Carbonator 500 — a behemoth mobile system created by Ragnarsson and his company,

Ragnar Original Innovation — is designed to convert the material into biochar, a valuable

Ragnarsson and his business partner, Matt O’Connor, were on hand Jan. 30 for a

demonstration of the Carbonator 500 on private timberland near Lebanon, Ore. Other

demonstrations were also held across Oregon, including stops in Wallowa, Fossil and

doesn’t have a viable market,” said O’Connor, director of the carbonizer division at Ragnar

Original Innovation. “We are sequestering all of that carbon that can then be utilized in a

Making biochar is not an original concept. The history of the substance dates back to

since it acts like a sponge in soil to soak up and hold water. As a soil amendment, biochar

marketplace. Based in New Hampshire, Ragnar Original Innovations developed the

Ragnarsson said he expects to build between 30 and 35 units in 2019, as more companies

and forest managers learn about the benefits of making biochar.

“The trick here is not to burn up all the carbon in the wood, because then it would go up in

The Carbonator 500 is built like a tank, and operates by remote control. Because it can

drive directly to the site, Ragnarsson said it eliminates additional transportation costs of

hauling woody debris from the forest.

Slash is dropped into the combustion chamber, which burns the wood at 2,500 degrees

Fahrenheit. A 148-horsepower diesel engine powers fans that create an air curtain around

the fire, keeping in smoke and emissions while keeping out oxygen — a process known as

As the material burns, it breaks up and falls beneath a grate into a chamber where it is

quenched in water to stop combustion. Auger conveyors remove the finished biochar from

the vehicle, where it can be cooled and collected.

Walking Point Farms, a company owned by disabled veterans that brokers with government

agencies and partners to provide agricultural products such as biochar, fertilizer and

herbicides, has expressed keen interest in the Carbonator 500.

Chris Tenney, vice president of business operations, said they are working with Ragnar

Original Innovation to help the technology gain a foothold in the Pacific Northwest.

“This thing could offer solutions for just about anyone here who touches biomass,” Tenney

Jim Archuleta, biomass and wood innovation coordinator for the U.S. Forest Service in

Portland, has worked with a nonprofit organization, Forest 2 Farm, interested in providing

forest waste as a source of material for biochar that can then be used on farms.

product in the woods.

“This is an opportunity to create a bridge from the forest to the farm,” Archuleta said.

Tom Miles, an energy and engineering consultant in Portland, works with the International

Biochar Initiative and helped to schedule the Carbonator 500 demonstrations in Oregon.

He said there are currently about 135 biochar producers in the U.S., though he expects that

“We have a huge educational challenge,” he said. “It’s very difficult to get people interested

in what biochar is, and how it can help.”

Story and photo by George Plavin; Capital Press – The Wests Ag Weekly since 1928

For  a good story on another method of dealing with slash, read “Learning About Logging” by Larry Rea – www.taxaflora.com