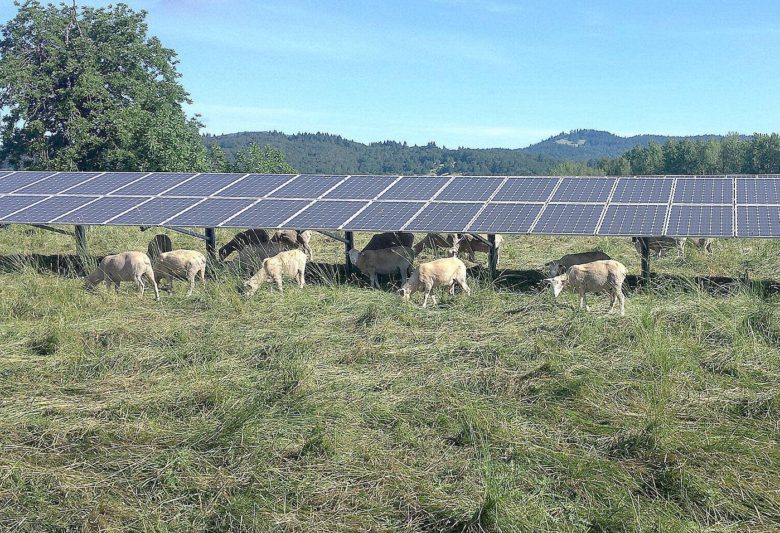 Oregon’s land use regulators have temporarily expanded restrictions on solar arrays on high-value farmland over the objections of advocates who claim they’ll impede development.

Solar facilities larger than 12 acres on high-value farmland have required conditional use permits in Oregon, but ambiguities in the regulatory language raised concerns among farm and conservation groups.

For example, one project was approved without a permit last year because the county government determined it didn’t “preclude” agriculture use, since bees could still forage beneath the solar panels.

In response to these concerns, the Land Conservation and Development Commission issued temporary rules clarifying that solar projects cannot “use, occupy or cover” more than 12 acres, regardless of whether they “preclude” farm uses.

During a Jan. 24 meeting in Salem, Ore., the commission voted to approve additional provisions prohibiting most solar development on top-quality soils: those defined as Class I, Class II, prime and unique.

However, the revised rules will allow solar facilities of up to 20 acres on such soils if the project includes a “farm use element” for the project’s duration, as determined by county land use rules. The special rules for “dual use” facilities are set to expire in 2022.

Due to a request to submit additional information, the commission will also revisit the solar rules again at its meeting on March 21-22 with the goal of enacting permanent regulations.

A representative of Renewable Northwest, a nonprofit that supports solar energy, hopes the additional information will be compelling enough for the commission to decide changes need to be made to the rules.

“From the perspective of solar interests, the rule is extremely prohibitive and has the potential to cripple the state’s community solar program before it really gets going,” said Rikki Seguin, the group’s policy director.

Under Oregon’s community solar program, residents could subscribe to a shared solar facility within their utility’s service district, but the recently adopted rules could greatly restrict where projects could be built in the Willamette Valley, Seguin said.

Solar facilities can help Oregon farmers earn extra income to keep their land in the family and the property can ultimately be returned to agricultural use, she said.

“There’s a fixed life to solar facilities,” Seguin said, adding that preserving Oregon farmland should be balanced with developing the state’s clean energy economy. “What we see missing from these rules is any consideration of balance.”

The farmland preservation group 1,000 Friends of Oregon supports the temporary rules in light of the “challenging process” and “strong interests on all sides of the issue,” said Meriel Darzen, rural lands attorney for the nonprofit.

“In the end, we feel the department did the best it could with the very difficult position it was in,” she said.

The regulation takes the “best of the best soils” off the table while leaving enough land open so solar development can occur in the appropriate areas, she said.

The rules are likely just the beginning of the conversation and 1,000 Friends of Oregon would like to see Oregon continue to revisit the issue and develop a statewide vision for renewable energy and land use, Darzen said.

Mary Anne Cooper, public policy counsel for Oregon Farm Bureau, said the rules were a “step in the right direction” and hopes they will be revisited as more data becomes available about solar development in the Willamette Valley and elsewhere in Oregon.

The Farm Bureau would like to see the state government recognize other aspects of agricultural productivity other than soil quality, such as the availability of irrigation, drainage systems or high-quality rangeland forage, she said.

Data collected by Oregon’s Department of Land Conservation and Development — which is overseen by the commission — indicates 80 projects are currently proposed on nearly 1,000 acres of high-value farmland in the Willamette Valley.

Although solar advocates argued that proposed solar projects represent less than one-tenth of 1 percent of the nearly 1.46 million acres of high-value farmland in the Willamette Valley, DLCD recommended enacting the stricter regulations because the farmland impacts have been “disproportionate” in some areas.

The proposed conversion of nearly 1,000 acres of high-value farmland in the region “in a relatively short period of time” indicated that the existing rules for solar development were “too permissive” in the context of preserving farmland, the agency said.

Sheep graze underneath a solar array at Oregon State University in Corvallis, where researchers discovered grass growing more lush later in the season than elsewhere in the pasture. Such dual use projects are subject to special provisions under new Oregon rules for solar developments. (Oregon State University)