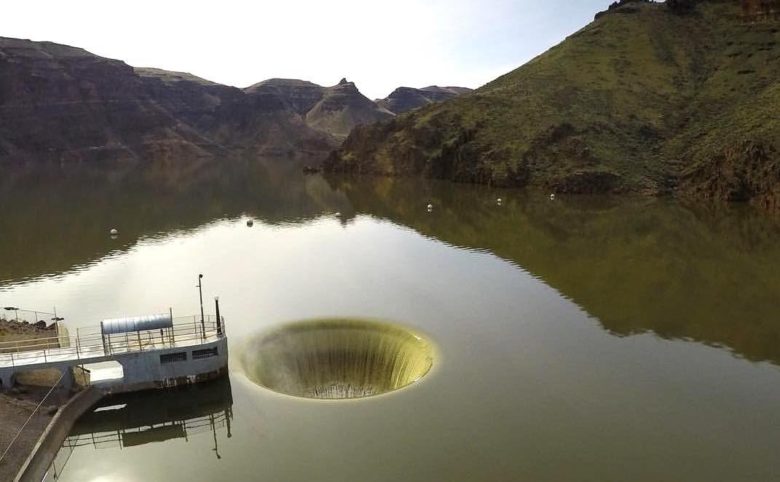 Repairs are expected to start by summer on part of Owyhee Reservoir’s “glory hole” ring-gate spillway.

The system, built into a rock outcropping just upstream of the dam, moves runoff water through a concrete chamber and into the river below with help from a floating steel ring on rack-and-pinion gears.

“We are having some superficial damage on the concrete itself,” Owyhee Irrigation District Project Manager Jay Chamberlin said. “We’re going to have to go out there, do some demolition and knock loose portions off.”

Crews in turn will find concrete reinforcement bars within the existing structure and begin to rebuild damaged areas.

Access poses a challenge because the damaged area is halfway around the structure and facing the reservoir rather than the dam, he said. Most equipment will be small so it can get to the site on scaffolding attached to the ring-gate structure. Pneumatic pumps will carry concrete.

“Logistically, it’s going to be very difficult,” Chamberlin said. “You have the vertical drop and are out on the rock outcropping.”

The system remains functional. The project’s start could be in May or June depending on how runoff season affects access, he said.

Cost will be determined based on further review of the project’s scope of work, Chamberlin said, but “we’re hoping to keep it under half a million dollars.”

The U.S. Bureau of Reclamation owns Owyhee Dam outside Adrian, Ore. The dam is operated and maintained by OID, Owyhee Project South Board of Control and the Old Owyhee Ditch Improvement District.

Snowpack was well below average in the Owyhee drainage last year. It was around 99 percent of average Jan. 28, 2019, when Reclamation pegged the reservoir at 38 percent full and Chamberlin said Owyhee Reservoir contained about 240,000 acre-feet of water. The reservoir needs 500,000 to satisfy full allotments for all irrigated acres, he said.

Maximum snowpack typically occurs April 1, and “whether there is enough time to accumulate desired levels remains to be seen,” said Brian Sauer, just-retired water manager for Reclamation’s Middle Snake River region. “We are going to need a little help from Mother Nature. There is some snow in the long-range forecast, so that will help.”

When Owyhee Reservoir is full, he said, “barring any extreme drought, there is usually sufficient water for two years of adequate water supplies.”

The ‘glory hole’ at the Owyhee Reservoir funnels excess water into the spillway and out into the river below the dam. (Courtesy Bureau of Reclamation)