An Oregon Tree for a Capitol Christmas 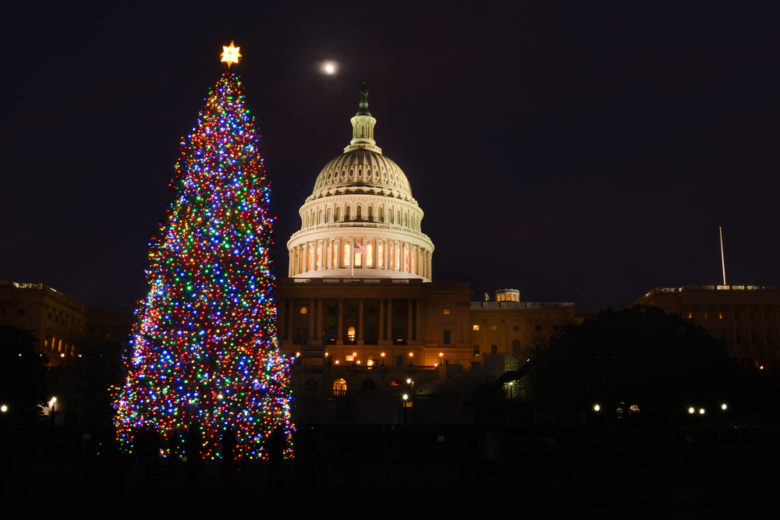 An 80-foot Noble fir from Oregon will be placed on the West Lawn of the U.S. Capitol and lighted on Dec. 5.

The 82-foot noble fir resting on cradles for move to Sweet Home.

The Capitol Christmas Tree ready for transport to Sweet Home for wrapping.

SWEET HOME, Ore — The Capitol Tree is ready to make its way to D.C.

An 80-foot tall Noble fir was cut and loaded onto cradles on a long trailer following ceremonies in the remote forest of the Willamette National Forest’s Sweet Home Ranger District Nov. 2.

Despite what one person called a “very drippy, wet Oregon day,” more than 50 people selected to attend the tree cutting ceremonies joined Forest Service and others despite sometimes heavy rain.

The cutting ceremony was just the first of more than 30 events planned in coming weeks. Following at street fair and parade in Sweet Home this coming Friday, more special celebrations are planned in 10 other Oregon cities before the tree, only the second ever Capitol or “People’s Tree,” begins a 3,000-mile journey to the West Lawn of the Capitol, where tree lighting ceremonies are planned for Dec. 5.

Mo McElroy, a member of Choose Outdoors, a group that helps coordinate annual Capitol Christmas Tree celebrations, told of her experiences during community gatherings held when previous trees have made their way to Washington, D.C.

“It’s amazing,” McElroy said of the response by people in communities during previous trips. “The tree is greeted by thousands and when we get to D.C. its celebrated by thousands. This is the spirit of love.”

“This is really the beginning of Christmas,” echoed Linn County Commissioner Will Tucker.

Sweet Home Mayor Greg Mahler referred to his city’s historic reliance on the timber industry, saying, “This is really a tribute to our roots.”

Given special tribute was Nikki Swanson, the Sweet Home District Ranger credited with her lobbying efforts to have this year’s Capitol Christmas Tree harvested from her ranger district. She noted the noble fir, the first-ever selected as the Capitol tree, was selected from five possible trees by the Architect of Capitol earlier this year. According to Swanson, he deemed the tree “by far the most beautiful tree.”

During the caravan to D.C., Swanson will post a daily blog. Ongoing information will be posted on the Capitol Christmas Tree Facebook page and at www.capitolchristmastree.org.

Forest Service officials noted the 80-foot tree was relatively young, an estimated 36 years. It was located on a Forest Service road eight miles up a dirt/gravel road.