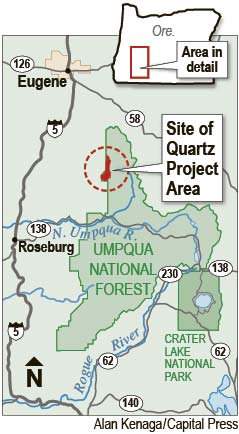 Environmentalists have failed to win an injunction against a 500-acre logging project in Oregon’s Umpqua National Forest.

A federal judge has denied a request from several environmental groups for a preliminary injunction against a 500-acre logging project in Oregon’s Umpqua National Forest.

Cascadia Wildlands, Oregon Wild and Benton Forest Coalition filed a lawsuit against the U.S. Forest Service earlier this year for allegedly approving the Quartz project in violation of the National Environmental Policy Act.

The plaintiffs argued a preliminary injunction blocking timber harvest was warranted because the federal agency hadn’t re-submitted its environmental analysis for public comment after additional red tree vole nests were found in the area.

Red tree voles are a protected species the Forest Service must “survey and manage” under the Northwest Forest Plan, a federal law intended to resolve conflicts between logging and conservation in the region.

The 517-acre Quartz project consists of “matrix” lands, which are designated for multiple forest uses, and includes trees in the range of 90 to 130 years old.

Initially, the Forest Service found only 13 red tree vole nest sites within the project’s boundaries, but amended that estimate to 87 nest sites and later added 70 more due to objections and data from the environmental groups.

Despite these findings, the Forest Service determined the area was “non-high priority” for the species, leading the plaintiffs to claim the agency had “gone out of its way to ensure the existence of red tree voles would not hinder its proposed timber harvest.”

The environmentalists alleged the Forest Service should have re-opened its environmental analysis to public comment both times the nest site estimate was changed.

The agency should also have updated its analysis with information about how revised land management plans on adjacent Bureau of Land Management property would affect the red tree vole, according to the plaintiffs.

U.S. District Judge Michael McShane has now rejected their arguments, ruling that the public comment opportunities on the project were sufficient under NEPA.

“Requiring the FS to open up every additional confirmation of a nest or site in the Quartz area to public comment would likely result in a never-ending process of supplements and further comment,” he said.

Likewise, the agency’s assessment of the new management plan for BLM property was adequate, since “it does not follow that any changes to land use practices on adjacent lands necessarily results in a meaningful impact” to the “non-high priority” designation of the Quartz site, McShane said.

An injunction also isn’t warranted partly because the plaintiffs waited eight months after project approval to file their complaint, he said.

During that time, two timber companies — Rosbo and Swanson Group, who have intervened in the case — signed contracts and otherwise planned to harvest timber, creating “private vested interests,” McShane said.

“Roads have been built. Logging has begun. The defendant intervenors are depending on the lumber to keep their mills open and active now and during the coming months,” he said.

The Quartz project is also intended to reduce wildfire risk in the area, which weighs in favor of the public interest apart from the private economic considerations, he said.

“While the risk of fire is certainly speculative as to the specific area in question, the raging (and massive) months-long fires in Oregon and Northern California the past few summers demonstrate the threat is real,” McShane said.


Forestry Skills Come to the Classroom