Folks are Friendly in Fossil 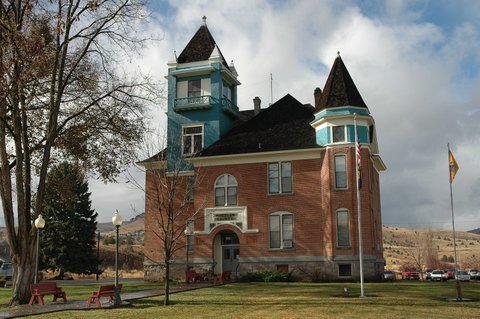 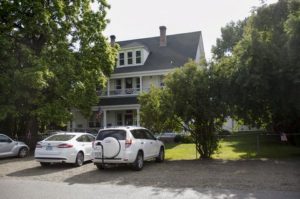 What’s to see and do in Fossil? My friend and I were about to find out. With a goal of spending at least one night in each of Oregon’s 36 county seats, Fossil was our destination in Wheeler County.  .

On this near record hot summer day, we chose Oregon Route 218, which starts in the ghost town of Shaniko (Wasco County) and ends 46 miles later at the intersection of Oregon Route 19 in Fossil. As we crossed the John Day River, the temperature was 99-degrees Fahrenheit. The gauge climbed to 129 degrees as we reached the summit.

As we descended into Cottonwood Creek Canyon and into Fossil, the temperature bottomed out at 109 degrees (a little below the record of 111 degrees set in July 2003). With an elevation of 2,654 feet, there was hope for a cool evening, as Fossil’s weather records indicate it can freeze any night of the year.

Fossil is located at the confluence of the Butte and Cottonwood creeks. Its population is listed on the 2010 census as 473 people, but it is reported to have declined slightly since then. 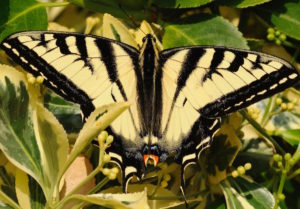 We found our Bed and Breakfast , the Hyatt House, to be a delightful two-story home well-shaded by trees that shielded us from the afternoon heat. Our hostess greeted us, showed us to our rooms, and pointed out some of the sights. In addition to the County Courthouse, where folks were setting up for an annual bluegrass festival, there was the restaurant and the grocery store should we want to “fix our own supper.”

We walked the few blocks to the store and sat on a bench in the shade of the canopy. Folks stopped by to chat about the weather and their day. Later, it was back to the B&B, where we sat on the veranda and watched magnificent swallowtail butterflies joust in the yard.

The clip-clop of horses’ hooves announced the arrival of cowboys . . . twirling lassos as they rode . . . perhaps practicing for the rodeo coming the second weekend in August. Later in the cool evening mule deer would be roaming the streets. After dark, we heard the cry of coyotes foraging nearby.

The next morning, we joined our fellow travelers at breakfast and shared adventure stories We decided to skip fossil digging and instead bid farewell to the friendly folks of Fossil to continue our journey to the next county seat.

Photo by Larry Rea. You can learn more about his travels at  at taxaflora.com

For more about Fossil, visit https://traveloregon.com/places-to-go/cities/fossil/