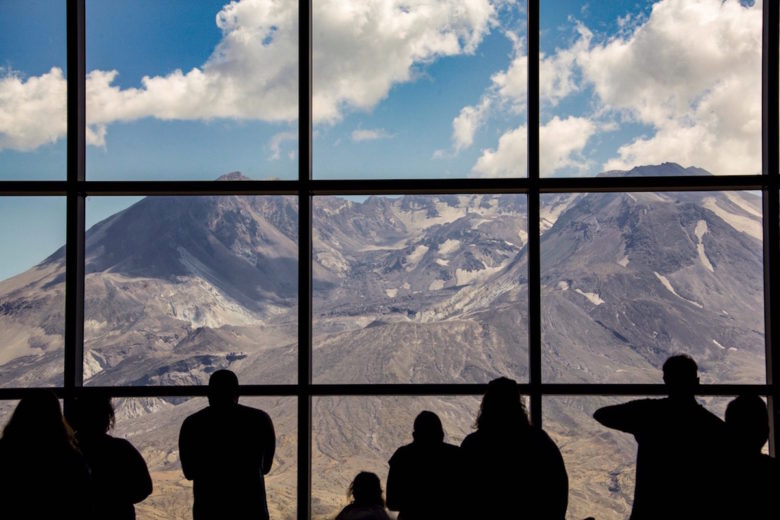 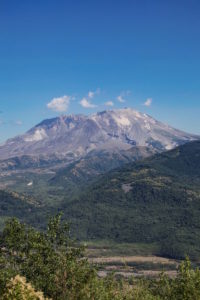 “And why would I want to visit the Johnston Ridge Observatory at Mount St. Helens?”

“ . . . And the view of what remains is sobering and will blow your mind.”

Moments later we were heading north on I-5 for the Castle Rock Exit and the 4000-plus foot climb to the mountain. The smooth highway wound its way through stands of evergreen and deciduous forests. As we climbed, we played tag with the Tuttle River. 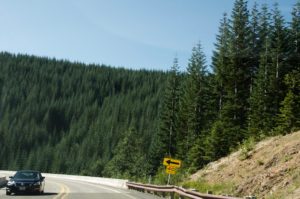 “Look more closely,” I said. “Notice the even tree skyline.”

“You got a point there . . . its got a well-groomed look, unlike the shaggy haircut look of forests we’ve seen elsewhere. Why is that?”

I chuckled with a know-it-all smugness. “When the mountain blew, it sent rivers of mud and ash downhill flattening everything in sight including every structure and tree it encountered.”

“Yeah, and because Weyerhaeuser replanted the devastated acres all at the same time, the fir trees all grew at the same rate . . . thus the well-groomed look.”

“Well, isn’t that a kick in the pants . . .” Arnie marveled. “But what’s with the patches of mixed trees . . . with just a few evergreens mixed in with the others?” 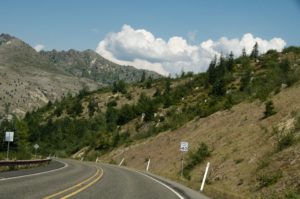 “The mixed acreage is federal land. The United States Forest Service is mandated to let its land reforest itself.”

“Well, tree lovers wouldn’t call them ‘junk’. The deciduous trees add variety and beauty to the forest . . . as well as who knows what other benefits.”

By now we had reached the approach to the Johnston Observatory. We had watched periodic panoramic views of St. Helens for several miles. In the hazy distance the mountain had looked like a giant had reached out with an enormous finger and gouged out an unwanted blemish that left an ugly scar in the otherwise beautiful face of that almost perfect, sugar-loaf mountain.

We were surprised to find the large parking lot nearly full of cars. Obviously, viewing the remains of that catastrophic event is a popular attraction. The center was also crowded with visitors viewing the excellent displays.

“Can you believe it?” Arnie said pointing at one of several graphic boards telling of the harrowing stories of those who somehow survived the event.

We joined a lengthy line of people heading into the sizable auditorium to view fragments of video taken during the event.

Though I had seen much of the footage before, it still seemed incredible that the top of a mountain could simply be blown away so quickly.

The movie (one of three) we were watching was over . . . we sat in the dark expecting the lights to come on so we could safely leave the auditorium.

Suddenly, the movie screen the curtain behind it slowly raised revealing a wall-filled window out of which we could see the mountain. There she stood making her statement. “I stand exposed, naked before you . . . Go ahead, look your fill . . . examine every crevice, every wrinkle, every blemish. It was breathtaking.

And wrinkles there were. Jagged edges and rivers of ash had spilled out of the crater and solidified those nearly 40 years ago. In the middle of the crater was a new dome rising like a boil. It appears likely that it will one day blow again.

After getting a camera full of pictures we headed for the car and down the mountain.

“Named after David Johnston, a volcanologist who was camping on the ridge when the mountain blew. He shortwave radioed his last words, ‘Vancouver, Vancouver, this is it!’”

His body was never found.