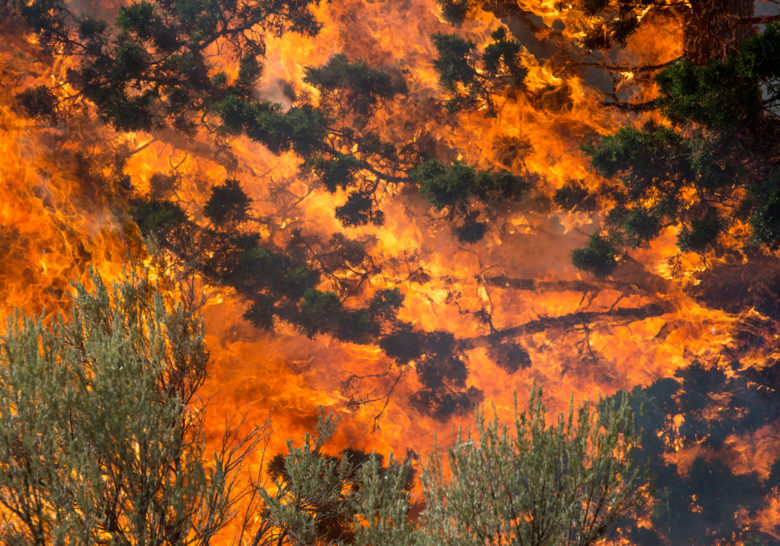 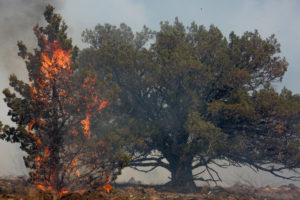 Heavy wildfire weather was what the locals were discussing at the cafés long table. The long shadows that pointed eastward that summer afternoon; the tiny, micro-thunderstorms that had marched across the sky, matching and mirroring the drifting and bouncing army of tumbleweeds rolling across the desert; the rain that had bucketed in isolated strips, no wider than a football field while everywhere else, dry lightning pounded the parched range.

“You’ve got two smoke sightings on the other side of the creek.”

The fire boss and his 19-year-old stepson swung into action. Running to the semi-truck-sized water pumper, their sights were set on protecting their community and neighbors from a wildfire that could quickly consume everything in its path.

“This is going to be a long night,” the fire boss muttered, concentrating on the road.

Quickly, steadily they made their way on a back road along a ridge, tracking two fires by the shifting glow, deep in the distance. One fire was burning high on the east slope of a juniper and sage covered ridge. From his house, a rancher had seen the original lightning strike just over a mile away in his winter grazing range.

When the fire boss arrived, they consulted.

If the fire was allowed to cross the ridge toward the rancher’s house and hay fields, it’d be a long, hard fight in rugged terrain. They felt their best option was to hold it on the high ground until bulldozers arrived. 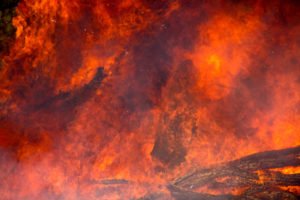 The fire boss returned to the pumper truck cab and his stepson scrambled up onto the deck with the water tanks. At the same time, the rancher’s son joined the first responders on his ATV (all-terrain vehicle) to assess the situation from close range.

Crossing the valley and over the ridge, they watched as the wind-driven fire raced parallel to them through the sage and rabbit brush about 150 yards away.

Night-blinded by the bright fire, they missed seeing another micro-thunderstorm bobbing through the sky toward their ridge. Once again, the wind changed direction—right at them.

Between one breath and the next, the flames gusted higher than the pumper truck roof. Before their next breath, the fire was on them.

There was no place to run or hide.

“GET DOWN!!!” the fireboss bellowed at his stepson, as he turned his pumper truck directly into the howling inferno.

The rancher’s son, still astride his ATV, saw the fire blow up in their direction. He got low and sucked his vehicle in tight behind the pumper truck’s bumper. Together, they drove for their lives. 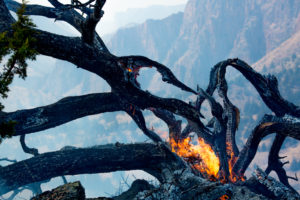 When it was safe, the fire boss stopped the pumper truck to assess his stepson’s injuries. He had second and third degree burns over almost a third of his body—serious, but not life threatening.

He limped the pumper truck back to the rancher’s house on a flat tire. Once there, he phoned for medical assistance to fly his injured stepson to the big-city hospital burn unit.

Then he went back to work helping to contain the fire until reinforcements arrived.

So, that’s what the café locals were talking about. The conversation created a question:

How do we express our gratitude to people who put themselves in harms way while protecting their community?

No one at the table had any easy or quick answers, except to say…

“THANK YOU. OUR HOUSES AND FAMILIES ARE STILL HERE BECAUSE OF YOUR SACRIFICE.YOU’RE APPRECIATED!!!”

First wildfire responders are the partisans of the high desert. For them, it’s about the community and neighbors helping neighbors. They have skin in the game when they stand between their family and friends and crackling flames on the range.

The stepson spent three weeks in the hospital and recovered from his burns. He returned to college classes last winter and plans on helping his community with wildfires this year.

For those of you who are interested in more stories of the rural American West, check…http://dustydogcafe.com/

Merinos in the Rain