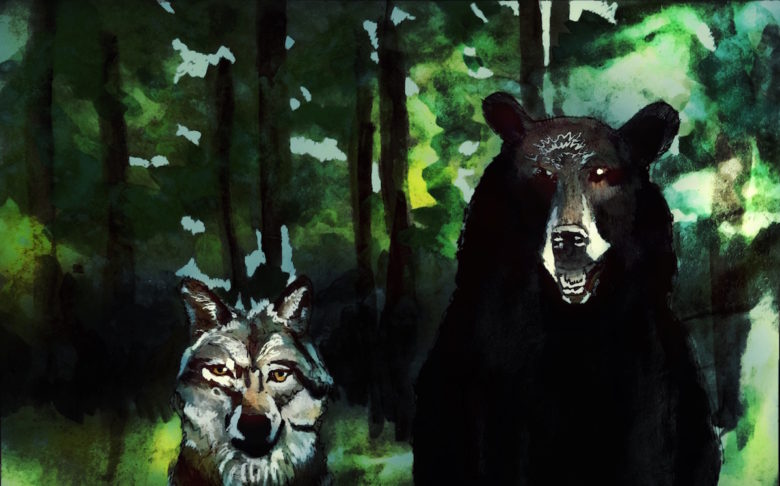 “If I can catch one… they’re tricky… feint left and go right.”

“I just as soon swat fish out of the river or gnaw on a wad of buckwheat,” Burly continued.

“Listen,” Snap said impatiently turning in a circle, “… I’ll take the deer down… you can feed on the carrion.”

While Snap trotted off light footed down a slope, Burly followed placing one heavy paw after another to the ground and grunting with every step. The noise the big bear made annoyed Snap.

Suddenly, Snap stopped, his muscles tense. He spotted a doe partially hidden by a cluster of sagebrush a hundred yards away. Burly lumbered up beside Snap and snorted.

The deer’s head shot up facing their direction, and before Snap could make a move, dashed away.

“Nice,” Snap said sarcastically. “Do you have to move like a boulder?”

“Like a bear…” Burly said defensively. “What’s wrong with the way I move?”

You scare everything else away… No wonder you have to eat hay and green stuff.”

“You want to go on without me?” Burly asked, his tone revealing hurt feelings.

Snap looked at the big creature. He guessed the bear was right… he moved the best he could. Changing his tone, he said, “No, come on! Just try not to snort so much,” and after a moment added, “Don’t snort at all… would be best.”

Burly didn’t say anything. He just hurried to keep up trying to make as little noise as possible. Snap felt certain that as long as the clumsy bear was with him, he was not likely to take a deer.

‘Maybe I ought to ditch him,’ he thought. ‘No… he is a companion… haven’t found a wolf… don’t know when I will…’

By now the pair had hiked about five miles. Along the way Snap caught and devoured an ermine and a long-tailed weasel. They stopped for water a few miles south.

“Doesn’t it bother you to eat those helpless little critters?” Burly asked finishing off a leafy spurge and sitting down in the creek’s cool water.

“Seems unfair,” Burly said, “… big creature like you preying on the little ones…”

“Yeah, I guess…” Snap paused reflecting, “But it’s the way of the world… I noticed you pop grasshoppers and clean up after me… so who are you to judge.”

“Have to get fat… get ready for hibernation…”

“I need to rest a bit more,” Burly said getting out of the water.

Snap didn’t like the idea of lingering… but he liked the bear’s company so he settled down in the shade of a juniper until the moon showed over a ridge to the east.

Snap walked to a nearby rock outcropping and howled into the air. He waited for an answer. Again there was silence. Snap wondered if his quest was hopeless. Sleep overcame his thoughts.

Snap Wolf’s Journey to Find a Mate is available in paperback or on Kindle at Amazon.com

From the Annals of The Oregon Bee Project


Which Came First the Otters or the Coho