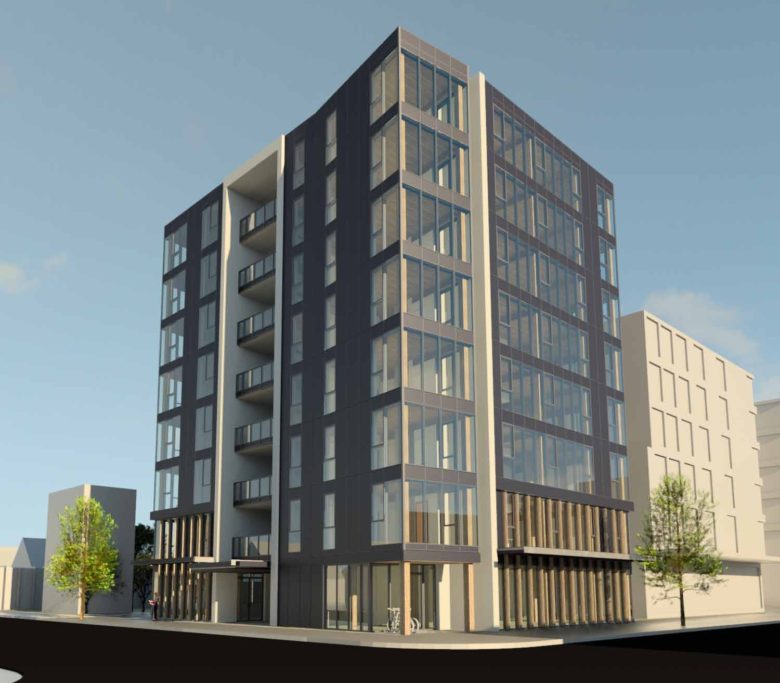 The good news is, 21st century technology has figured out how to build a safe, low cost all-wood high-rise. It is also good news that it’s happening in Oregon where the timber industry knows how to grow the trees sustainably. Economical, renewable, sustainable – you can’t get much better than that./Ed.

PORTLAND — Officials in Oregon have approved construction permits for the first all-wood high-rise building in the nation.

Construction on the 12-story building, called Framework, will break ground this fall in Portland’s trendy and rapidly growing Pearl District and is expected to be completed by the following winter.

The decision by state and local authorities to allow construction comes after months of painstaking testing of the emerging technologies that will be used to build it, including a product called cross-laminated timber, or CLT.

To make CLT, lumber manufacturers align 2-by-4 boards in perpendicular layers and then glue them together like a giant sandwich before sliding the resulting panels into a massive press for drying. The resulting panels are stronger than traditional wood because of the cross-hatched layers; CLT can withstand horizontal and vertical pressures similar to those from a significant earthquake with minimal damage.

They are also lighter and easier to work with than regular timber, resulting in lower cost and less waste.

For this project, scientists at Portland State University and Oregon State University subjected large panels of CLT to hundreds of thousands of pounds of pressure and experimented with different methods for joining them together.

State officials hope the building will stir greater interest in high-rise construction using mass timber and help revitalize the state’s lagging logging industry. Logging, once a major source of revenue in Oregon, has dropped sharply in the past few decades because of greater environmental protections for salmon and the spotted owl. The loss of the industry has devastated some of the state’s rural communities.

“Projects like the Framework building present a new opportunity for Oregon that we are perfectly suited to take on,” Gov. Kate Brown said. “Oregon’s forests are a tried and true resource that may again be the key to economic stability for rural Oregon.”

The Portland building will be filled with subsidized apartments and bank offices.


From the Annals of The Oregon Bee Project