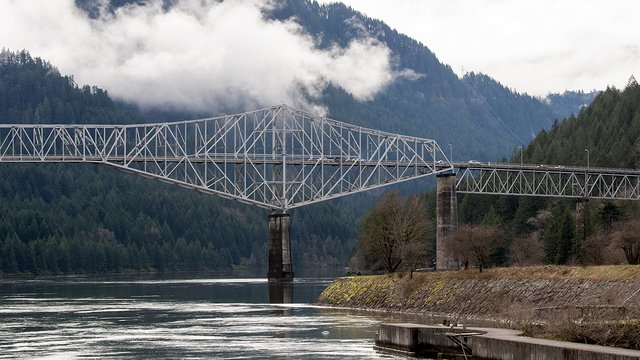 “The engineers among you will recognize the “Bridge of the Gods” (located at Cascade Locks, Oregon),  as a steel truss cantilever structure. It was named for a geologic feature (landslide) that once blocked the river here and eventually formed the cascades here on the Columbia River.

The berm to the right is part of a lock that allowed boats to bypass the cascades . . .   thus the name “Cascade Locks.” The Pacific Crest Trail, which runs from the Mexican Border in California to the border with Canada in Washington state, crosses the Columbia River on this bridge.

And, for you trivia collectors, this is the lowest point on the Pacific Crest Trail.”