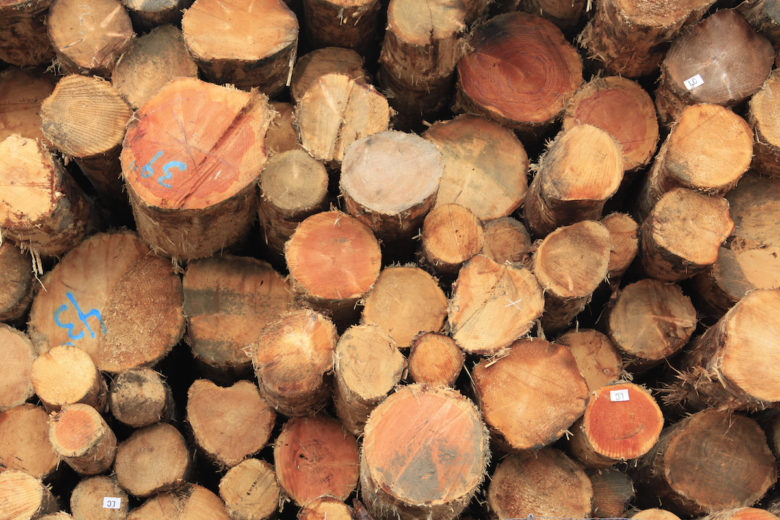 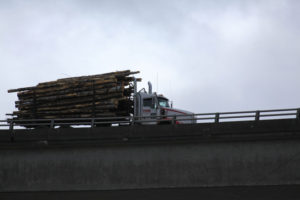 Walked Astoria’s waterfront again today. Of course Arnie, my alter ego was with me. Can’t seem to shake him these days.

We started out after having continental breakfast in the Riverwalk Inn lounge. From our table I could see the segment of the Astoria-Megler Bridge that comes to rest on the Oregon side. I was admiring the design and engineering of the massive structure, when a log truck came into view.

“Look at that!” I said pointing to the impressive vehicle.

Arnie turned. “Wow,” he said. And after watching the rig for a few seconds, continued, “Wouldn’t you think the truck’s tires would explode under all that weight?”

I laughed. “Shows you don’t understand the physical laws governing such stuff.”

Arnie retorted, “And you do?”

I know what I read and what my expert buddy KC tells me.”

“That we’re probably looking at a five-axel truck that can gross 80,000 pounds.”

“Makes my brain glaze over,” Arnie said, hoping to dismiss the metadata.

“Arnie, aren’t you curious about where those logs came from and where they’re headed?”

“Yeah, as long as it doesn’t get us into another overload of statistics.”

“Come on,” I said getting up and heading for the door.

A few minutes later we found ourselves looking at an astonishing sight . . . 50-yard-long piles of logs stacked 25 to 30 feet high waiting on the pier ready to be loaded on oceangoing cargo ships.

“Wow, that would make a lot of lumber,” Arnie said with genuine awe. “Where do those trees come from?”

“All from private tree farmers.”

“Private? How do you know?”

“Well it isn’t legal to export timber from public lands . . . in fact, you can tell these were harvested from private operators because they have tags on them instead of dabs of paint . . . red would tell you that the logs are from state lands and yellow says they’re from Bureau of Land Management.“ 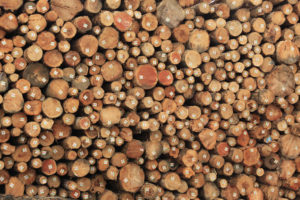 “Yeah, in a way . . . we’re talking about using wisdom in harvesting, you know, clear-cutting and other means of taking trees. Not everybody wants to harvest trees – some want the forests to stand untouched.”

“I’m with those who want them to stay untouched. Those clear-cuts look like bad haircuts . . . and taking all the trees has to harm the atmosphere.”

“Shows you don’t know much about good forest management . . . the methods they use these days leave the ecosystem healthier than letting the trees grow into the old more mature forests.”

“Oregon Forest Practices Act rules. Do you think those guys who own those tree farms want to destroy the atmosphere? NOT! Doing so would destroy their livelihood.”

I laughed, “It doesn’t take long for that hair to grow back.”

“Okay, so now what happens to the logs?” Arnie asked gesturing to one of the stacks. 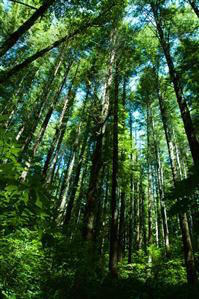 “Most of them go to Japan to use for building materials . . . and a little comes back to the US as trinkets. You know, that’s another war . . . those who don’t want logs to leave the US without being processed into wood products and those who want the free market to determine what happens to them.”

“I suppose you want laws that require that logs to be milled here in the US?” Arnie asked.

“I’m a chameleon on that issue. I like free enterprise and I also like keeping jobs here. The other problem is, Japan likes to build custom-cut houses . . . our system is set up based on feet and inches and they are on the metric system . . . so, it makes more sense to just send them the logs.”

“Wonder why those logs are piled different from the rest?” Arnie asked having had enough controversy.

“Got me. I like the skinny stack . . . has a certain artistic mystique about it.”

I laughed, “In the summer, cruise ships dock at this pier. At first the cruise company was concerned about their passengers not wanting to see all the mess but it turned out that the tourists liked watching the log loading better than going into town.”

Arnie and I laughed at the fickleness of mankind . . . and then we declared that we were a bit that way too.

After being satiated with logs, we returned to the hotel. At the gift-store I bought a wooden trinket. Wouldn’t you know, it was made in Japan.

For a fun look at Astoria’s Waterfront, take a virtual trolly ride https://www.youtube.com/watch?v=2DPEIIlAIzM