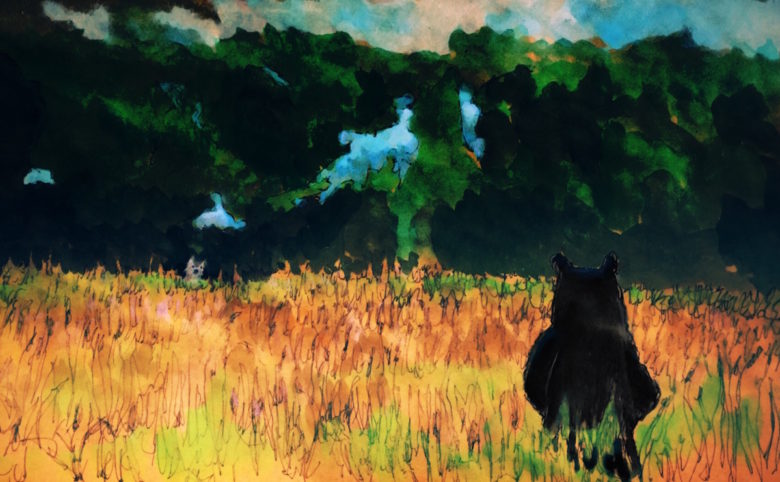 Snap peered back across the river for signs of Chester. The gangly, fearful critter was nowhere to be seen. He crouched low behind a bush, paused a few moments and listened . . . no sound of bigs, which is what he called humans.

He began to think he had made the wrong decision. ‘ . . . Should I have listened to Chester,’ he thought. ‘ . . . Nothing here . . . little satisfied his hunger by catching and downing a batch of grasshoppers. They didn’t taste good, but he could sustain himself by feeding on them until he encountered a deer.

Snap vacillated between thinking he should return to Powder River or move on in hope of finding a creek, a forest . . . other animals . . . anything promising a meaningful new life for a wolf. ‘Or maybe I ought to just go back to the Imnaha . . . back to the pack . . . back to servitude?’

He got to his feet and continued south.

He came to a black rocky trail (the bigs call it a road) snaking its way over and through the rugged hills to the east and west. Snap had never seen a trail that busy. Hollowed out logs (the bigs call cars) raced this way and that. ‘ They can run faster than me. What are they looking for?’ Snap wondered. It didn’t look like they ever left the well-worn path. He crouched for a long while watching the strange creatures. He questioned whether he would ever be able to get across without being chased down.

He could see that the water channel passed into a black tunnel beneath the rock-trail. He’d never seen any- thing like this dark hole before. It could be a trap.

He inched forward into the gaping hole. The paws of the logs, pounding the trail surface above him made a terrible sound. As he dashed through the dark tube, he expected to be blown apart any second. He was relieved when he moved beyond the tunnel and on into the rolling hills to the south. It was not a trap after all.

An hour later, exhausted, he found a pile of straw to lie on. But first . . . he put his front paws on a mound of dirt near his bed, raised his nose, and howled.

He waited . . . No answer. The weary wolf stretched himself on the straw and fell asleep.

Snap woke at first light the following morning. A faint golden orange glow morphed into the inky darkness of the sky above him. It was beautiful.

‘Flowers are like that too,’ he thought. ‘They start their lives out of darkness . . . open into midlife splendor of color and fade into gray at evening.’ He wondered how it could be so . . . he wondered why it should be so. He would continue to wonder about things during the days ahead.

He got up, raised his nose to the air, and sniffed, hoping for the scent of wolves . . . no wolves . . . another whiff for any wildlife. Yes, ahead of him to the west, bears and deer roamed the forest.

He trotted into a patch of woods, caught, and devoured a young hare. e puny creature wouldn’t supply him energy for very long, but it was better than worms or grasshoppers.

He trotted up and down varying grades of steepness, sometimes through the shade, and other times across bare red dirt strewn with sharp rocks.

He had traveled several miles through the undulating terrain, when he sensed a bear was nearby. He could handle any animal he might encounter . . . but he would rather not deal with a bear.

To challenge a bear was to test his fighting skills to their limits. He slowed his gate to reduce the sound his huge paws made. Snap knew that bears, like wolves, coyotes, bobcats and other sizable wild animals also have sensitive smell. He was glad the breeze was blowing from the west carrying the bear’s scent to him and not the other way around. If he encountered the bear, he hoped it would be a cub . . . small enough not to be a threat.

It was not a cub. His keen eyes spotted a full-grown black bear swatting and eating grasshoppers with his big paws.

Snap stopped behind the mottled trunk of a tall pine and waited for the big bear to move on. Instead the huge creature raised his massive head, sniffed the air, and said, “I know you’re there . . . smells like nothing I’ve ever smelled before. Are you bigger than I am? Come out where I can see you.”

Snap had seen bears move. They can run fast, but Snap was sure he could run faster, if he needed to. He slowly crept from behind the tree, keeping a sharp eye on the bear.

“Oh,” the bear said, “You’re the biggest coyote I’ve ever seen. How did you get so big?”

The bear raised himself on his hind legs as if surprised at Snap’s question. He wagged his enormous head.

Snap realized that the bear had never seen a wolf before . . . only coyotes and probably foxes and maybe guard dogs.

“I’m a wolf,” Snap said, mincing his way a few steps toward the bear. “You’ve never seen a wolf before?”

“A wolf. Huh? What about wolves?” the big creature asked, tilting his head to the side.

Snap took another relaxed step toward the big bear, feeling confident that Burly meant him no harm. “You know what’s over there?” Snap asked, pointing a paw toward a mountain across a canyon.

“My cubs lumbering about with their mother,” Burly answered.

“Dooley Mountain and some stone trails put there by bigs,” Burly said matter-of-factly.

“And beyond that?” Snap asked, eyeing the range of mountains to the west.

“Don’t know,” Burly said, plopping another grasshopper into his mouth, “ . . . Ever try one of these?

“Don’t know, but if you want to find out, why don’t you trot over and take a look?”

“You want to come?

Snap Wolf’s Journey to Find a Mate is available on Amazon.com

A Rattlesnake’s Eye View of Imnaha