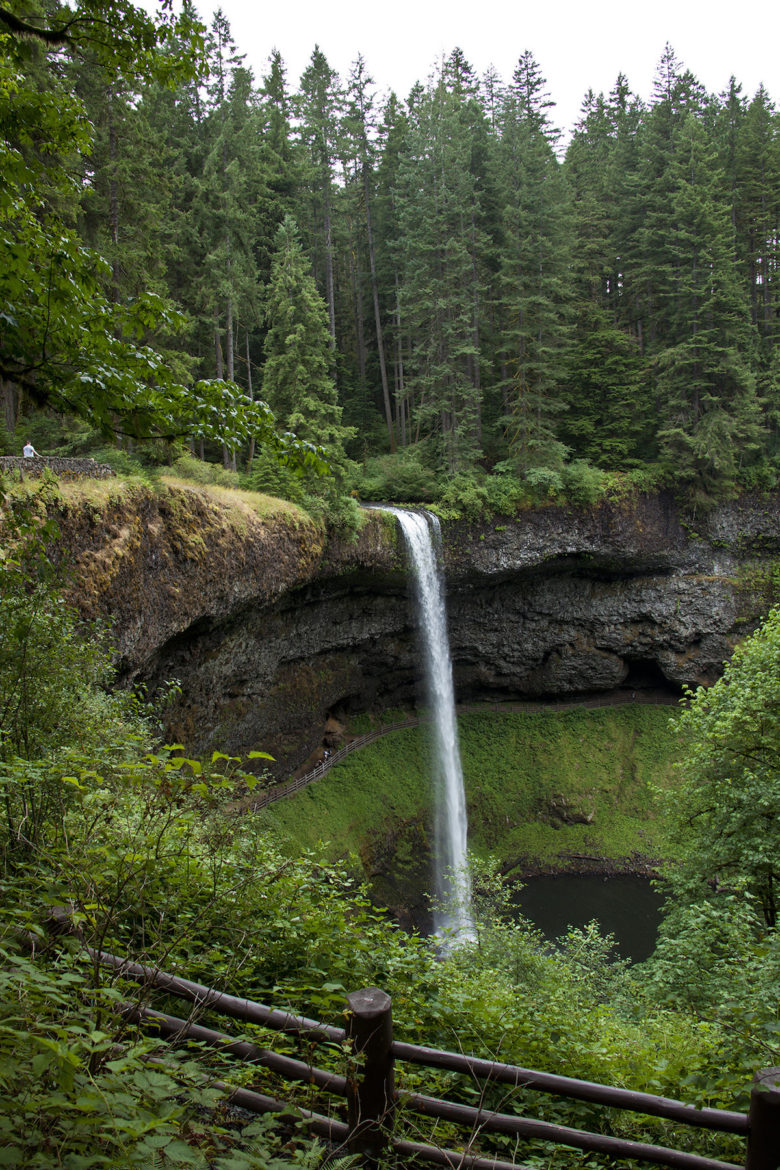 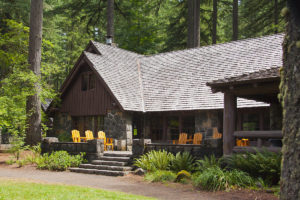 “I fell for Silver Falls and you will too,” I said to Arnie, my alter ego.

Traveling highways 22 and 214 east from Salem, it took us about an hour to get to the parking lot of Silver Falls Lodge.

“CCC workers built the building by hand out of materials they found in the forest,” I said easing my Forester into the shady parking lot.

“Yeah, right,” I laughed. “No . . . it stands for the Civilian Conservation Corps. Back in the early 1930s, when the depression put a quarter of America’s work force out of work,  Roosevelt created jobs for them. This park is one of the examples of what they did . . . pretty nice, wouldn’t you say?”

“Beautiful,” Arnie said, striding up the steps and onto the wooden porch. “Folk art, I’d say.” 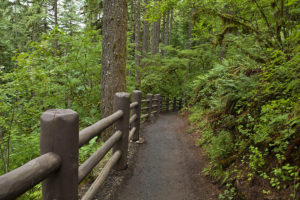 We grabbed coffee and a sandwich and headed down the trail. There are dozens of trails to hike and a bunch of waterfalls in this beautiful park, but I chose the one to South Falls.

The decline was easy going. Multi-shades of green foliage graced the trail up hill and down.

“It’s like nature insists on decorating with lacy curtains,” Arnie grinned and pointed to a cluster of translucent sun-bathed Oregon maple leaves.

“The air is fresh and crisp . . . like walking in a canopy of oxygen,” I said taking a deep breath.

“Yonder,” I said knowing that Arnie was in for an eye-pleaser. 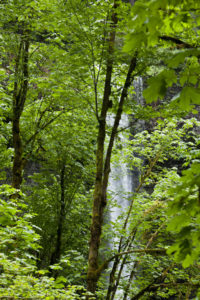 And then, he stopped . . . stunned at the magnificent sight. A river of water cascaded from a 177-foot spillway down to the pool below.

“I’ve seen lots of falls,” Arnie said lifting his camera for what turned out to be a boatload of photos. “This one is about as good as it gets.”

“Want to take a shower without getting wet?” I asked.

“That’d be a bit of magic,” Arnie said following me.

The wall of trees, partially obstructing the view of the falls, gave way to a first class overlook. We stopped again to take pictures.

Over the centuries the flowing water has etched away the lip of the falls leaving it at the apex of a crescent. Water corralled by sturdy banks continually gushes over the edge and falls with loose abandonment into the pool below. Traces of misty spray floated in the air in all directions. 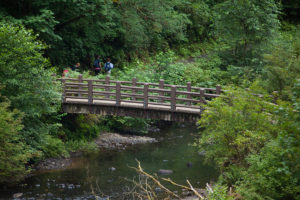 There were tourists ahead of us and behind us as we followed the trail around the crescent. We passed the waterfall to the other side of the creek, crossed a quaint bridge, also built by the CCC boys, and trekked back up the trail to the lodge parking lot. 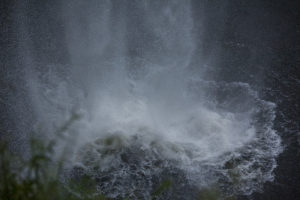 “Told you you could take a shower without getting wet,” I said as we arrived back at the lodge.

“Yeah, a different kind of a shower all right,” Arnie philosophized. “Fresh air filling our lungs, cool mist kissing our cheeks . . . gives a feeling of being clean inside and out.”

“I’m in,” Arnie said reaching for his billfold.

Guard Dog Molly to the Rescue